We live in an hour when both darkness and light must come to their full manifestation. The prophet Isaiah wrote:

Isaiah 60:1-2
Arise, shine; For your light has come! And the glory of Yahweh is risen upon you. For behold, the darkness shall cover the earth, and deep darkness the people; But Yahweh will arise over you, and His glory will be seen upon you.

The earth is becoming an ever darker place, yet it is at this season that Christ will raise up a people who will be to the praise of His glory on the earth. This will be a firstfruits company of true disciples. They will follow the Lamb wherever He leads. They will be marked by their love for God, and love for one another. This remnant will be bold and courageous. They will perform exploits in the name of Yahweh. This peculiar people, the called out ones from the earth, will love truth, and eschew error, and for all these things they will be hated by all peoples.

Mark 13:12-13
Now brother will betray brother to death, and a father his child; and children will rise up against parents and cause them to be put to death. And you will be hated by all for My name’s sake. But he who endures to the end shall be saved.

We live in an age of ruin, and an age of restoration and renewal. Kathy Furman, a sister in Christ from Arizona, informed me a few days ago about Barack Obama’s new campaign theme. You may remember that his chosen campaign theme for his first run at the presidency was “Change You Can Believe In.” This later evolved into “Change We Need.”

It has recently been announced that his new campaign theme will be presented in a question and answer format. The question is “Are You In?” The affirmative answer for a supporter of Barack Obama is “I’m in!”

Kathy pointed out to me that in this age of text messaging and Twitter accounts, the question poised by Obama’s new campaign would be written in the following manner:

RUIN is the change coming to America and the world. A day of disaster and desolation is at hand. Barack Obama marked his first inauguration in front of the Lincoln Memorial singing the song “American Pie” by Don McLean. The phrase, “This’ll be the day that I die” is oft repeated in this song. 500,000 Americans joined Obama in singing this song during his first inaugural ceremonies.  Dark days are ahead for America, yet it will also be a time of great glory for a remnant of God’s people.

Do not misunderstand me, I am not implying that the world will recognize the presence of Christ in this remnant of true disciples, nor that the world will admire them. Christ prophesied that the world would hate His disciples. A day would come when men would put Christ’s disciples to death thinking they do God a favor. Despite the outward appearance of the righteous being overcome by the wicked, the saints of God will truly conquer and walk as overcomers.

Romans 8:35-37
Who shall separate us from the love of Christ? Shall tribulation, or distress, or persecution, or famine, or nakedness, or peril, or sword? As it is written: “For Your sake we are killed all day long; We are accounted as sheep for the slaughter.” Yet in all these things we are more than conquerors through Him who loved us.

Revelation 12:11
“And they overcame him because of the blood of the Lamb and because of the word of their testimony, and they did not love their life even when faced with death.”

We are facing a day of RUIN, but also a day of renewal and restoration. My daughter Kristin, and two young women whom she is close to, Mary Ann and Nicole Yoder, are working on getting their first music CD prepared. They went out into a local wheat field yesterday to take some pictures to be used on the album cover. 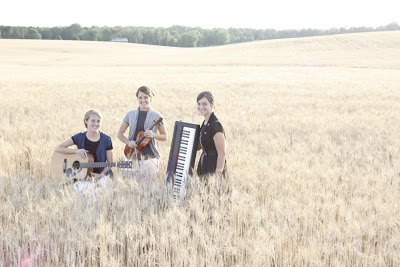 The name of their group is New Beginnings. When I speak to my daughter, and observe the lives of these three young women, I see something pure and innocent in the midst of a perverse and wicked generation. In an hour of darkness, God is yet reserving a remnant unto Himself who have not bowed the knee to this fallen world system. Those who walk in the light will grow brighter and brighter, even as the world becomes increasingly dark.

I have shared openly the progress of the bus the Father has led me to convert into a motorhome. The Father could have given me a brand new motorhome had He wished to do so. The same is true about my friend Randy Simmons who is laboring to restore a 1980’s vintage Monaco RV. I could name many others, including one sister in Christ who wrote to me today and told me she and her husband have been led to purchase a 1980’s Airstream and to renovate it.

What is up with all this restorative work? The Father does nothing without purpose and design. My bus will be forty years old in 2012, the year of the next election, the year when the Mayan calendar ends. Forty is a significant number throughout the Bible. It is associated with trials and testing and tribulation.

During the flood of Noah’s day it rained for forty days and forty nights.

The Israelites wandered for forty years in the wilderness until an entire generation died off.

Christ was led into the wilderness for forty days where He fasted and then was tempted of the devil.

The Lord has referred to my bus as an ark. I continue to get it ready, according to the Father’s instructions. Recently He instructed me to add a trailer hitch to pull the cargo trailer He gave me last year on my birthday. A few days ago I was led to organize the cargo area on the top of the bus roof. I had purchased a custom length, heavy duty white tarp to cover the area. My daughter helped me move some things to the roof area. 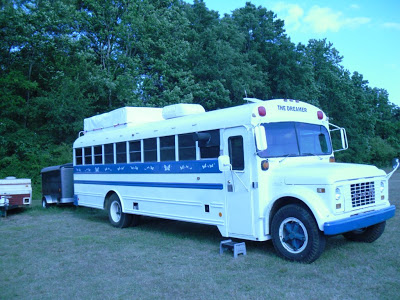 This unit is nearly complete. A sister who has followed the progress on the bus with interest wrote to me yesterday and asked me what I had left to do. The bus is actually quite livable now. I have been living in it since January 1st. I have also driven it some small distances recently, about 20 miles at a time. It is handling nicely.

I do need to replace the front tires, as they are dry rotted and cracked. I have yet to install a water heating system. I am planning a solar water heater. I also have a solar panel, and would like to add to it as an off-grid means of charging my auxiliary batteries. Adding another battery, or two would also be nice, if I am to ever use the bus off-grid. I need to have the rear axle pulled to replace a leaky rear seal. And the wheels have yet to be painted.

As the Father directs me, I am taking care of those projects He indicates I am to attend to. Whether He will have me do all of these things, I am not certain. It is hard to imagine what will be needed in the future. I am confident, however, that if I continue to listen to Him, all things will be in readiness when they are needed.

Why then, is the Father having so many people fix up old vehicles? Undoubtedly, there is a parable in it. I mentioned before that the bus the Father gave to me has a symbolic history. It began life in 1972 as a school bus. Sometime in the 1980s it was sold to a church and used for quite a few years. It was later sold to another church, and they held it for some time. It was then sold to an individual who used it to attend NASCAR races at th Atlanta Motor Speedway. The platform on top of the roof was added as a viewing platform. They would sit in chairs up there in the infield of the race track and watch the cars zip by.

When I purchased the bus it had visible elements from all of his various incarnations. The church began as a place of instruction. We read of the early church and its activities in the book of Acts.

Acts 2:42
They were continually devoting themselves to the apostles’ teaching and to fellowship, to the breaking of bread and to prayer.

Children who go to school do many similar things. They attend to the teaching presented to them. They eat while at school. They fellowship with their peers. In some Christian schools they still pray, but prayer has been removed from the public school system.

Like the Carpenter Bus I purchased, the church has devolved into a platform for entertainment. It has lost sight of its original purpose. God has directed me to transform this bus into a fit habitation. The Lord is soon to return and He is looking for a purified temple to dwell in. His people are that temple.

God is at work to call forth a people out of the houses of entertainment and confusion (Ever try to watch cars racing round and round an oval track. It will leave your head spinning.) He will take this “body by Carpenter” that has been in existence for many years, and transform it into something clean, pure, and purposeful. He is raising up the ancient ruins. He is accomplishing a work of restoration.

Isaiah 61:4
Then they will rebuild the ancient ruins, they will raise up the former devastations; And they will repair the ruined cities, the desolations of many generations.

There is much being signified by the actions of the people of God in this hour. Let us put our hearts into the work. Let the Spirit lead and guide. RUIN is coming to America and the nations, but a work of restoration and new beginnings is coming to a remnant portion of the body of Christ.