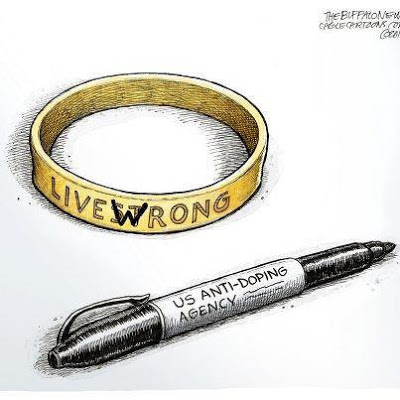 II Timothy 2:5
If anyone competes as an athlete, he does not win the prize unless he competes according to the rules.
For a time Lance Armstrong lived a fairy tale life. A survivor of testicular cancer that had spread to his lungs and brain, he overcame this obstacle to become a seven time winner of the Tour de France. Such success in the face of adversity led to lucrative endorsement deals with companies such as Nike, Annheuser-Busch, and Oakley. Armstrong’s golden boy image was further enhanced by the cancer foundation he established. The LiveStrong foundation became a source of hope for millions, and the little yellow bracelets distributed by the Lance Armstrong Foundation became a social icon. For millions who struggled with cancer, or had a loved one who was battling this disease, Lance Armstrong’s life became a source of great hope. 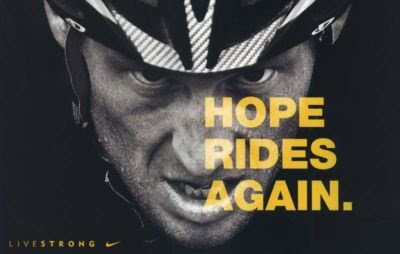 Lance Armstrong – LIVESTRONG
Had these facts been the sum and total of Lance Armstrong’s life, he would truly have left an inspiring legacy. Yet, beneath the facade of success and the image of a champion there were rumors of cheating. Doping, the use of banned, performance enhancing drugs, has fallen as a plague on the sport of cycling in recent years. From 1999-2005, the years in which Lance Armstrong won his record seven tour events, the U.S. Anti-Doping Agency reported that 20 of the 21 riders on the podium have been “directly tied to likely doping through admissions, sanctions, public investigations” or other means. It added that of the 45 riders on the podium between 1996 and 2010, 36 were by cyclists “similarly tainted by doping…”
[Source: http://www.cbsnews.com/8301-400_162-57537025/lance-armstrong-stripped-of-tour-de-france-medals/]
There have been a number of high-profile cyclists who have been stripped of their medals and banned from the sport recently. Rumors persisted that Lance Armstrong had employed illegal means to achieve his victories. The International sport of cycling relied upon blood and urine tests to catch those who were seeking an illegal advantage. Lance Armstrong had submitted routinely to such testing and had never been caught. Yet it was known that his cycling team employed physicians who had been linked to doping.
Reports from team-members, and associates began to surface, giving testimony to the fact that Lance Armstrong had practiced doping. Armstrong’s defense repeatedly was that he had never had a positive indication of doping from a blood or urine test. Armstrong survived several challenges in this manner, while the USADA contended that Armstrong’s cycling team had employed such sophistication in their doping schemes that they were able to pass the chemical analysis being used.
In the end, it seems that Armstrong relied too much upon gaming the system through sophisticated medical practices, while neglecting to consider the importance of eye witness accounts.
In total, 26 people — including 15 riders — testified that Armstrong and his teams used and trafficked banned substances and routinely used blood transfusions. Among the witnesses were loyal sidekick George Hincapie and convicted dopers Tyler Hamilton and Floyd Landis.
[Source: http://www.cbsnews.com/8301-400_162-57537025/lance-armstrong-stripped-of-tour-de-france-medals/]
The Bible states that an accusation is not valid if there is only one witness testifying to a matter. The principle has been that there must be two or three witnesses for a matter to be established (Deuteronomy 17:6). This requisite number has been greatly exceeded in the case of Lance Armstrong. As a result, the USADA banned Lance Armstrong from all international events which it oversees. The Tour de France vacated all seven of Armstrong’s victories, and all of the sponsors that had endorsement contracts with him canceled. The final insult occurred when Armstrong was forced to resign as chairman of the cancer foundation that he created and which had been indelibly linked to his name.

Cheat to Win
Those who have truly been cheated are the cancer victims and their loved ones who embraced the LiveStrong Foundation wholeheartedly as a symbol of hope and courage. Lance Armstrong was the face of this organization, and now his name conjures up associations of lying, cheating, and fraud. The Internet is rife with reports of people re-thinking their views of this very popular institution and its chief spokesman.
Others, however, who saw Armstrong as a symbol of hope and solidarity were completely devastated by his fall, with some cynically wondering if Livestrong was a front to deflect attention from doping allegations.
“It seemed that only a few years after his early comeback, he reverted into the same crass and cocky fella he was known to be pre-cancer. He lost any humility and never seemed contrite or thankful to be alive anymore,” iReporter Paul Smeulders said. ‘It appeared he started using LIVESTRONG as a brand to elevate himself and as a shield to cover or dodge criticism of his unsportsmanlike behavior.”
Wendy Adams of Manchester, Pennsylvania, and her sisters have been wearing their yellow bracelets since their father was diagnosed with end stage prostate cancer in 2004.
“We bought bracelets for more strength, for unity, and suddenly Lance wasn’t just an athlete any longer, he was hope,” Adams, 51, said in a CNN iReport. “We were connected to others who were proudly wearing the same [bracelet] yet living this horror of cancer, all of us, together with Lance, a man who went through it, and came out stronger and better.”
When her father died in 2005, the family respected his wish to be cremated wearing the bracelet and spent $200 dollars on the bracelets for family and friends to hand out.
Now, she says she can’t wear the bracelet with pride anymore because of its connection to Armstrong and the organization. She has taken it off and vows to never again wear it.
“My heart is broken by this news. I never thought Lance was involved in doping, I thought he was above it, an honest man with integrity and honor,” she said. “Lance is Livestrong, he is the face of hope. And when that face is that of a liar, a manipulator, for me? I can’t wear it with pride anymore…”
“Seven Tour de France wins is a long time to keep up a lie. He was worshipped (sic) and adored by many people,” said Rosado, 42.
“If you can’t accomplish the feat without cheating then it is not a feat,” he said. “It is a lie, and lots of people were looking up to those lies.”
[Source: http://edition.cnn.com/2012/10/18/living/lance-armstrong-livestrong-legacy/index.html] 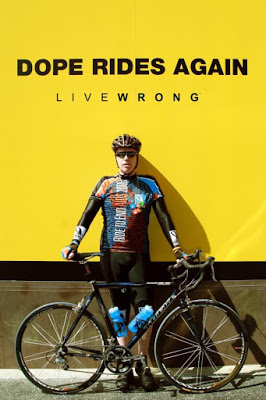 (Note: Image is of Armstrong’s former teammate Floyd Landis who was charged with doping in 2006 and stripped of his Tour de France medal.)
It is shattering to fall from the heights. To rise to the pinnacle of honor and glory only to have it all erased is a devastating blow. Yet, to have one’s name and reputation become a synonym for cheating and lying, and to become an icon of shame, is truly tragic. 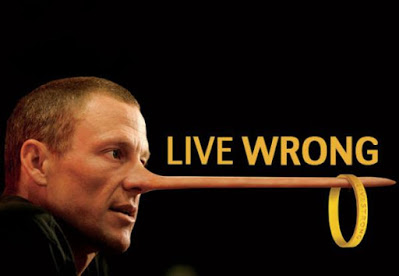