In this post I want to share one man’s recent experiences of how the Lord has answered prayers through unexpected ways. In some past posts I have shared some of the spiritual journey of a brother in Christ named Jeff Higdon.

Tornado Alley – Navigating Storms by the Spirit of Christ
https://heart4god.ws/wordpress/2013/06/tornado-alley-navigating-storms-by.html

Can a Christian Be a Prepper – Part 2
https://heart4god.ws/wordpress/2015/07/can-christian-be-prepper-part-two.html

I have been very blessed to know Jeff for a number of years now. Though we have never met face to face, we have corresponded frequently, and spoken on the phone. I recognize in Jeff the heart of a man who sincerely loves the Father and desires to live a life pleasing to Him. Jeff yielded to the Lord’s guidance and moved his family from Texas to Northern Idaho a few years back. This past December Jeff suffered a severe concussion when he stepped out of his log truck onto a patch of ice and fell, striking his head sharply on the pavement. He has suffered with migraines and other effects of the head injury since then. He is making improvement, but still has a way to go before the doctors will release him to return to work.

Since the injury, Jeff has used his time off from his trucking job to get some things done around his property. With limited financial resources coming in from his Worker’s Compensation checks, Jeff has faced a reduction in his income, and has not had much money available to make improvements to the land he, his wife, four of his daughters, and son-in-law live on. Yahweh has demonstrated to Jeff that He is well able to provide through a variety of ways. The saying is true that “when we are weak, He is strong.” Yahweh has certainly shown Himself strong on Jeff’s behalf. You can read some of the other posts linked above to read of Yahweh’s past provision and grace that He has demonstrated to Jeff and his family.

A week ago Jeff sent me the following e-mail.


Do you remember me saying I felt the Lord wanted me to prepare the diesel tank so it could be filled?  Yesterday I was given 55 gallons of off road diesel!!


I got 40 gallons of Sherwin-Williams enamel paint off of Craigslist that was listed for free.  It is $70 per gallon paint. I figure I’ve spent over $100 in the last year on paint so I could use that. When I got there, there was over 60 gallons of paint!


As I was loading up the paint Don, the man giving me the paint, asked if I’d like a pallet jack that needed some repair. I said yes, figuring I could fix it and make some money off of it.  However, I had no way of hauling it so I told him I would come back in the evening with a trailer.


When I came back he kept on giving me more and more stuff until my trailer was full!  Today I have to go back for at least another trailer load, maybe more. I can’t begin to name it all but here are a few highlights:


Today I’m going back to get a cord of seasoned firewood, applewood for smoking, two extension ladders, 55 gallons of diesel, rolls of new wire on spools, a tent, and who knows what else, I don’t remember it all.


Also yesterday we were blessed with a lot of fruit, 25 gallons of fuel for car, and …… My head is reeling. Can’t remember it all but we were extremely blessed! I’ll take some pictures and send them.

It turned out that the man getting rid of the material was under a deadline to move from the property he was occupying. He had to remove all his material by a close deadline. Some of the material he had consisted of 5 gallon buckets of floor stain and finish. It is difficult to sell, or even give away a large quantity of floor stain in a short period of time, and the local landfill considers it to be hazardous waste. The landfill will accept only a single 5 gallon bucket of such material per day from an individual. This put the man (his name is Don) in a quandary. Jeff talked the matter over with his wife Mary and they decided to take all of the buckets of stain from Don and to take them to the landfill one per day until they disposed of whatever they could not use, sell, or give away.

Don was greatly relieved at this act of kindness from Jeff, and reciprocated by giving Jeff even more good material at no cost. Following are some pictures of the items Jeff was given free. I saved the biggest gift until the end. 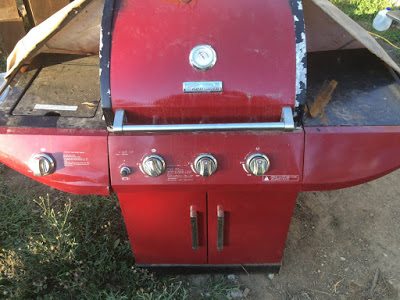 Jeff needed a grill for cooking outside. He had been looking for more than a year for a grill he could afford with a burner on the side. He was given this nice Kenmore model with a side burner, and it came with a propane tank as well. 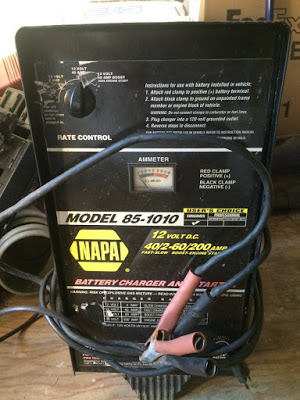 A large, high capacity 12 volt battery charger was another item Jeff received. Jeff wrote, “With my new battery bank I needed a bigger charger. I went to Napa and looked at this charger a couple weeks ago but couldn’t afford it.” 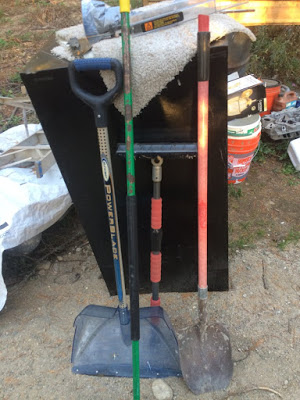 Jeff’s comment: “Specific things I needed: extra pointed shovel (prayed for), snow shovel (ours broke), was wanting a broom to sweep off the trailer, the green handle is a push broom. An ice scraper, needed. The black four drawer file cabinet I have been looking for to make a smoker out of it.” 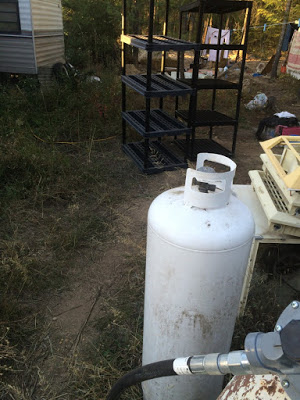 “One of the two 25 gallon propane tanks I got, this one is full. I was praying about propane to store.  In the background are two shelves for storage.”

The next picture shows something that is quite remarkable. Jeff is a large man with correspondingly large hands and feet. He wears a size 17 shoe. Incredibly, Don had a pair of size 17 Nike tennis shoes that he gave to Jeff. 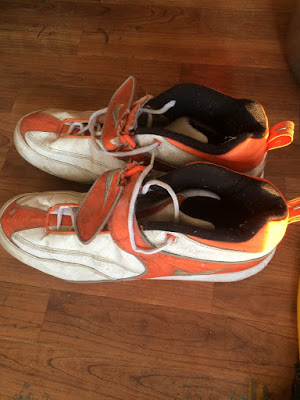 “Size 17 Nike tennis shoes!! This was the stamp that made it absolutely clear this was God. I have never seen a used pair of these in my size. In this shoe I wear a 17. Don said he picked them up years ago in a gym he was redoing. He wore them when he was fishing on his dock.” 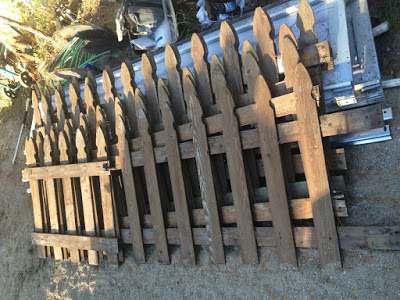 Cedar picket fencing. Jeff and his family have goats, and they needed some additional fencing. 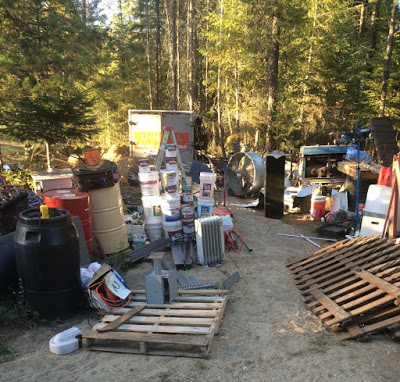 More items, including 60 gallons of paint, an oil filled radiant heater, an industrial sized fan, an 11 HP air compressor with a Honda motor, 2 deep cycle batteries, a better cart for his oxy/acetylene tanks for welding, and much more. 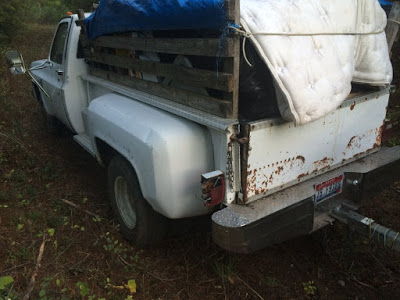 And to top it all off, this man that Jeff just met through Craigslist gave him a late ’70s, or early ’80s model, one-ton, Chevrolet pickup truck with dual wheels on the rear. The truck has 6 like new, snow tires, and cranks and runs beautifully. Don called the truck “Mighty Whitey!”

Well, if Yahweh can move on the hearts of 5 Christian brothers, some who have never met me, to purchase a Toyota RAV4 for me, why can’t He move upon the heart of a perfect stranger to give Jeff a one-ton pickup truck free? Our God does exceedingly, abundantly, beyond what we ask or think. At a time when Jeff did not have the money available to even purchase a set of tires, Yahweh gave him new tires and a truck attached to them. We serve an awesome God!