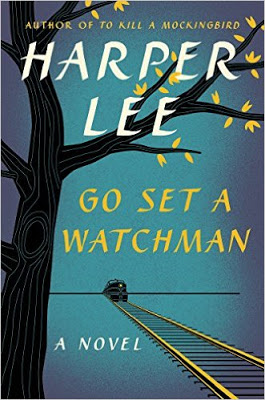 In the year 1960 a previously unknown writer from a small town in Alabama published a book that was to capture the imagination of a generation, a book which continues to sell well today. The author was Harper Lee and the book To Kill a Mockingbird. Harper Lee had no expectation of the success her book would attain. To date it has sold more than 40 million copies. It won the Pulitzer Prize in 1961 for a work of fiction. In 1962 an Oscar winning movie was made of the book, featuring Gregory Peck as the protagonist Atticus Finch. For background on this book, if you are unfamiliar with it, I recommend the excellent Sparknotes video below.

Harper Lee was considered by some to be a “one-hit-wonder.” It was quite a hit. In baseball parlance it would be called a “grand-slam.” In 1999 her book was voted “Best Novel of the Century.” After producing To Kill A Mockingbird, she never followed up that success with other writings. Questioned on a number of occasions about this, Ms. Lee maintained that she would never write another novel. Financially, she had no need to do so, as the revenue generated from To Kill A Mockingbird has left her quite comfortably situated. Ms. Lee is now 89 years of age, and lives in a modest retirement facility in the town of Monreoeville, Alabama, which served as the inspiration for the fictional town of Maycomb in her novel. She suffered a stroke in 2007, and is nearly blind and deaf, so it came as a great surprise to many people to learn that she will release a second novel at this late stage of her life.

The second novel is Go Set A Watchman. It is not a new writing. It was written in the mid 1950s before she wrote the book that would make her famous. It is reported that the manuscript to this early work was rejected by a publisher at the time. The book features many of the same characters found in To Kill A Mockingbird, but is set at a later period of their lives approximately twenty years after the events described in her first published novel. The editor who rejected this earlier book submission is reported to have suggested that Harper Lee write another novel based on earlier events in the characters’ lives. This led to the writing of the Pulitzer Prize winning novel. The earlier book manuscript now titled Go Set A Watchman was forgotten, and assumed to be lost. Various reports have come forth as to how the manuscript resurfaced.

Truly it is a remarkable story to find an author of Harper Lee’s status, who published a best-selling book with nothing to follow it up in more than 50 years, to bring forth another writing more than five decades later. The reception to this news has been nothing short of amazing. The book Go Set A Watchman is due to be released on July 14th, 2015 with a first print run of two million books. It is on pace to break the pre-order sales record set by the Harry Potter books, an amazing feat for a novel written more than 50 years ago that doesn’t feature any wizards or magic incantations. At present, before the book is even released, it is ranked as the number 1 best-selling work of fiction on Amazon. 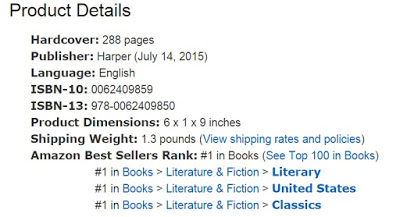 Merely taken as a social phenomenon, this is an interesting story. Yet, there is much more to consider regarding the unusual timing of this book and its title. The words “Go Set A Watchman” are taken from Isaiah 21:6.

Isaiah 21:6
For thus hath Yahweh said unto me, Go, set a watchman: let him declare what he seeth.

In looking at the context of this passage, we see that it is a prophecy of judgment against the nations. Immediately following the verse cited, we read the following prophecy against Babylon.

Isaiah 21:8-9
He cried like a lion: “Lord, I stand continually on the watchtower in the daytime, and every night I stay at my post. Behold, here comes a troop of men, horsemen in pairs.” He answered, “Fallen, fallen is Babylon; and all the engraved images of her gods are broken to the ground.”

Over the course of my ministry I have written numerous series and posts on America’s relationship to Babylon. Following are a some examples:

Yet, the greatest concern for the body of Christ today is in understanding that the apostate religious system that is outwardly identified as Christianity, is itself referred to as Babylon, the Great Harlot, in the Bible.

The Spirit of Christ is calling the people of God to come out of Babylon, for judgment is coming to her. Those who remain in the houses of religious confusion and apostasy will end up participating in the sins of Babylon, and they will partake of her plagues.

Revelation 18:4-5
And I heard another voice from heaven, saying, “Come out of her, my people, that you may not participate in her sins and that you may not receive of her plagues; for her sins have piled up as high as heaven, and God has remembered her iniquities.”

Two days ago a sister in Christ wrote to me to ask my thoughts about a new trend sweeping the churches called “Holy Yoga.” This woman said that she had participated in it for a year at her church, but became troubled about it. Both of her adult daughters are instructors of “Holy Yoga.” 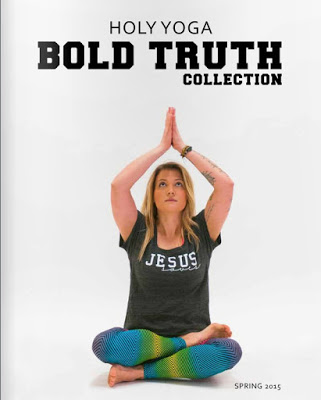 Not surprisingly, the women featured on the Holy Yoga website are tattooed (as in the image above), having embraced another profane practice of a world under the influence of Satan. Babylon was known for its religious confusion. The Babylonians did not mind if the captive Jews worshiped Yahweh, just as long as they accepted the other deities worshiped in Babylon as well.

In September, the Roman Catholic Pope will address both houses of the United States Congress, and the United Nations. The Roman Catholic Church has been leading a push to merge all of the world’s religions into one. Following is an excerpt from a recent article on The Christian Post website. 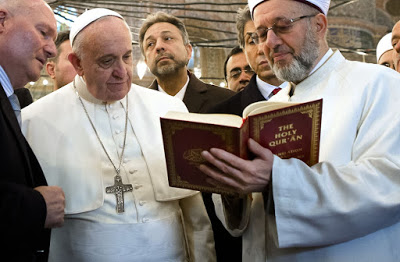 A day after calling for inter-religious dialogue to end Islamist extremism, Pope Francis on Saturday visited a 17th-century mosque in Istanbul and spent several minutes in a silent prayer with his head bowed in the direction of Mecca. 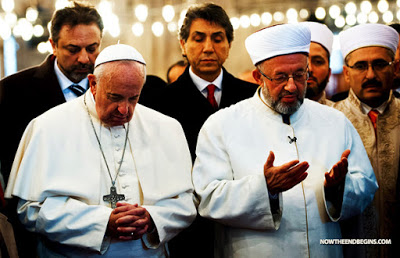 The pope made the gesture to promote Christian-Muslim relations at the Sultan Ahmet Mosque, known as the Blue Mosque, on Saturday, the second day of his three-day Turkey visit, according to the Vatican Radio.


He removed his shoes before entering the mosque with blue tiles on its walls. Standing next to him was the Grand Mufti, who explained about the Koranic verses illustrated on the stones pillars and the dome…


“Fanaticism and fundamentalism, as well as irrational fears which foster misunderstanding and discrimination, need to be countered by the solidarity of all believers,” the pope said Friday in a speech to Turkey’s President Recep Tayyip Erdogan and other political leaders on the first day of his pastoral visit to the cities of Ankara and Istanbul.


“It is essential that all citizens – Muslim, Jewish and Christian – both in the provision and practice of the law, enjoy the same rights and respect the same duties,” the pope added in his speech Friday. “They will then find it easier to see each other as brothers and sisters who are travelling the same path, seeking always to reject misunderstandings while promoting cooperation and concord.
[Source: http://www.christianpost.com/news/pope-francis-prays-in-turkeys-mosque-head-bowed-toward-mecca-130449/]

This Babylonian confusion is spreading throughout the churches. Is there not a message in the title of this soon-to-be-released book by Harper Lee? Yahweh is speaking to His people to “Go Set A Watchman and report what you see.” Judgment is coming. Babylon is about to be judged. The horsemen are already on their way. Raiders are about to enter the land. They will leave death and destruction in their wake. Come out of Babylon, people of God! Pursue humility. Pursue righteousness, that you may perhaps be hidden in the day of Yahweh’s wrath.

(Thanks to Richard for notifying me of the soon release of this book.)