God’s Plan of the Ages – A Final Note 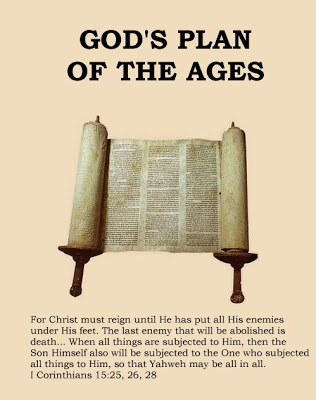 It is my hope that the revision of this book will prove effectual in leading those who seek truth to the discovery of Yahweh’s magnificent plan of the ages. It is not possible in any writing to answer every question that could be raised. To write an exhaustive teaching of these truths is beyond the ability of this author, and would certainly prove tiresome to many who are not requiring an exhaustive work.

It has been my aim to lay a foundation for understanding that which is taught in the Scriptures concerning the reconciliation of the creation to the Father. It is the responsibility of every saint to pursue truth. All of Christ’s disciples must acquit themselves as workmen, laboring to become skilled and knowledgeable in the truths of Yahweh’s kingdom. Those who are most faithful will surely reap the rewards of their labors.

In this teaching it has been established that all who died in Adam will be made alive in Christ, but “each in his own order.” Yahweh has appointed some as barley, some as wheat, and others as grapes. Each will be harvested at the appointed time. Each must come to maturity according to the election of God.

That salvation is a gift of God, granted to those whom He chooses, at the time He appoints, should be patiently considered. We were all at some point children of wrath.

Ephesians 2:3
Among them we too all formerly lived in the lusts of our flesh, indulging the desires of the flesh and of the mind, and were by nature children of wrath, even as the rest.

That any should repent and be reconciled to God is not due to man, but rather is a gift from God.

Ephesians 2:4-5
But God, being rich in mercy, because of His great love with which He loved us, even when we were dead in our transgressions, made us alive together with Christ (by grace you have been saved)…

It should not offend any Christian to learn that God will in the end demonstrate His mercy to all whom He has created. If you are a Christian, a disciple of Christ, it is not due to your own piety that you were shown mercy. Your eyes were not opened to perceive the salvation of God because you were better than other men. Yahweh simply chose to have mercy on you, while He has chosen to harden others.

Consider for a moment the plight of the Jewish people today. At this time Yahweh has given grace to Gentiles, while hardening the majority of the natural descendants of Abraham.

Romans 11:25-27
For I do not desire, brethren, that you should be ignorant of this mystery, lest you should be wise in your own opinion, that blindness in part has happened to Israel until the fullness of the Gentiles has come in. And so all Israel will be saved, as it is written: “The Deliverer will come out of Zion, and He will turn away ungodliness from Jacob; For this is My covenant with them, when I take away their sins.”

II Corinthians 3:14
But their minds were hardened; for until this very day at the reading of the old covenant the same veil remains unlifted…

Why does God find fault with the Jews, seeing that it is by His will that a hardening has occurred? Would you condemn to an eternal hell those whom God has prevented from perceiving the truth? Yahweh has appointed a time when all Israel will be saved, but the time is not yet. Seeing that Yahweh hardens some, and has mercy on others, how can those who have received mercy hold any greater desire in their heart than for Yahweh to demonstrate the mercy they received to others?

Romans 9:14-18
What shall we say then? Is there unrighteousness with God? Certainly not! For He says to Moses, “I will have mercy on whomever I will have mercy, and I will have compassion on whomever I will have compassion.” So then it is not of him who wills, nor of him who runs, but of God who shows mercy. For the Scripture says to the Pharaoh, “For this very purpose I have raised you up, that I may show My power in you, and that My name may be declared in all the earth.” Therefore He has mercy on whom He wills, and whom He wills He hardens.

None can come to Christ unless the Spirit draws them (John 6:44).

Is it right for those who have been granted mercy to revile those who have not, saying that they are getting what they deserve? To receive mercy is to obtain that which is not deserved. All men have sinned and are deserving of death. At this time we see Yahweh demonstrating mercy to some, while hardening others. This is the situation of all men. We are all born as children of wrath. Yahweh has shown mercy to some at this time, while hardening others.

A remnant from among men have seen their peril. They have become aware of the judgment and wrath that awaits the sons of disobedience. Yahweh has opened their eyes to perceive the Lamb of God who takes away the sins of the world. It is appointed to them to be among the first to see and believe. Will such ones not desire that the mercy shown them be made manifest to all men?

Christ has come to deliver men from sin and the penalty of death, but each in his own order. Some are appointed to be firstborn sons, and others latter born sons. Yahweh does all things according to His own counsel. He reveals Christ to some, while blinding the eyes of others.

An hour will come when those whom Yahweh has hardened will be shown mercy. Those rejected will be accepted. Those dead in their sins will receive life in Christ. Yahweh sent His Son into the world that all men might be saved.

Isaiah 45:22-23
Turn to Me and be saved, all the ends of the earth; For I am God, and there is no other. I have sworn by Myself, the word has gone forth from My mouth in righteousness and will not turn back, that to Me every knee will bow, every tongue will swear allegiance.

Titus 2:11
For the grace of God has appeared, bringing salvation to all men…

We see at this time a firstfruits company who have received mercy. This is a token and pledge of that full redemption which is to come.

I John 2:2
And He Himself is the propitiation (merciful covering) for our sins; and not for ours only, but also for those of the whole world.

Let not those who have now obtained mercy despise those who have not. It was by no merit of your own that you have obtained grace. When God’s plan of the ages has reached its final conclusion there will be left nothing in creation that has not been reconciled to the Father. Christ’s will wield the power given to Him to subject all things to Himself.

Hebrews 2:8
For in subjecting all things to him, He left nothing that is not subject to him. But now we do not yet see all things subjected to him.

The church has failed to perceive the meaning of the words “not yet.” What we see today is “not yet” the end of Christ’s rule. Christ must reign until He has subjected all things to the Father. Then will come the end. This is the testimony of Scripture.

Revelation 5:13
And every created thing which is in heaven and on the earth and under the earth and on the sea, and all things in them, I heard saying, “To Him who sits on the throne, and to the Lamb, be blessing and honor and glory and dominion forever and ever.”

What is excluded from the phrase “every created thing”? Every creature “in heaven and on the earth and under the earth and in the sea” will worship God in spirit and in truth.

Philippians 2:10-11
At the name of Yahshua every knee shall bow, of those in heaven, and of those on earth, and of those under the earth, and every tongue shall confess that Yahshua Christ is Lord, to the glory of God the Father.

Hallelujah! Jesus Christ, Yahshua the Messiah, is the Savior of the world!