In the Presence of Evil 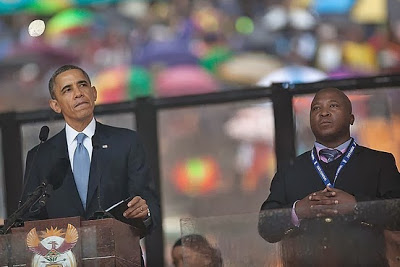 There have been two recent news stories that have gripped the attention of the world in which men reportedly entered into a trance like state. The most recent story relates how a South African sign language translator who stood on stage with U.S. President Barack Obama, was making unintelligible hand signs. Experts in sign language state that the man was making nonsensical motions with his hands, and was not using any recognizable form of sign language. The following website provides a good analysis of the man’s sign language.

This event took place in a packed stadium in Johannesburg that holds 90,000 people. The people were gathered to pay tribute to Nelson Mandela. The man performing the false sign language was viewed on a large screen standing next to President Obama and other world leaders. The event was televised, being broadcast to millions of viewers worldwide. Many deaf viewers watching from other nations stated that the man was signing “gibberish.” Following is a short video showing his actions.

Online news sources are now reporting that Thami Jantjie, the man signing, suffers from schizophrenia. Following are a couple of quotes from news articles.

The sign-language interpreter accused of making up hand gestures at Nelson Mandela’s memorial said Thursday that he is schizophrenic and was hallucinating at the time.


The revelation raises questions about security at an event where he stood beside U.S. President Barack Obama and other world leaders.


“I’m currently a patient receiving treatment in schizophrenia,” Thamsanqa Jantjie said in an interview with a Johannesburg radio station, Talk Radio 702. He said he was certified to translate spoken English into sign language, and that he has successfully handled other high-profile events in South Africa for deaf audiences.


But Mr. Jantjie said that as he took the stage within arms’ length of Mr. Obama and other leaders at a memorial in a Johannesburg soccer stadium on Tuesday, he slipped into an altered state. He said he saw angels coming into the stadium.
[Source: http://stream.wsj.com/story/latest-headlines/SS-2-63399/SS-2-404200/]

For his part, Jantjie said that while voices in his head impaired his ability to interpret what was being said on stage, he was unable to leave and continued to sign things that didn’t make sense.
[Source: http://www.foxnews.com/world/2013/12/12/interpreter-for-mandela-memorial-says-was-hallucinating/]

Mr. Jantjie also reported that he very frequently becomes violent when an attack of schizophrenia comes on him. Many forms of mental illness are the result of the influence of unclean spirits and demonic attacks. That his bizarre behavior occurred at a time when he testified that he saw angels coming into the stadium, and that he slipped into an altered state and heard voices in his head, lends credence to the suggestion that he experienced a supernatural attack from the forces of darkness in Satan’s kingdom.

One thing that frequently occurs with individuals under the influence of demonic spirits is that they begin to babble unintelligibly. Here we see an unusual case where the babbling that took place was communicated through sign language. The stadium was filled with many of the chief servants of Satan in this fallen world system, including Barack Obama. They were memorializing the life of another one of Satan’s servants. The entire event was filled with deceit, falsehood, and lying speeches by men and women who call that which is evil good, and that which is good evil.

In one sense, what occurred with this man was a manifestation of the spirit of Babylon. It was at Babel that the languages of man were confused. When the men spoke, their language appeared as gibberish to one another. Similarly, when this man signed the words of numerous world leaders who were speaking in English, his communication came forth as gibberish.

Satan is working to re-establish Babylon in the earth. He would reunite all humanity under a single global government. This is the New World Order that the ruling elite speak of with anticipation and great fondness. We see signs of Babylon rising and nearing its completion. The One World Trade Center in New York City serves as one sign of how near the earth is to seeing Satan’s global government realized. This building is scheduled to open for occupancy in 2014. (For more on what is signified by the One World Trade Tower, see the article entitled Babylon Rising.)

We stand at the end of the age and we will see darkness increase. One sign of the increasing darkness will be that men fall under a greater control to the spiritual forces of darkness in this world. Millions of people have made their minds ripe for Satanic influence as they have succumbed to the counsel of godless men to fill their bodies with powerful psychotropic drugs. These drugs lower mankind’s defense against dark spiritual influences. The results are seen as depression, outbursts of anger, suicide, and murder are increasingly linked to individuals under the influence of these drugs.

(For more information on this subject, see the website SSRI Stories.)

A second major news story in the media recently reported on a train wreck in New York. The wreck resulted in four fatalities and more than 60 people injured. An Associated Press story reports the following:

An engineer whose speeding commuter train ran off the rails along a curve, killing four people, experienced a hypnosis-like “daze” and nodded at the controls just before the wreck, and by the time he caught himself it was too late, people representing him said Tuesday.


Attorney Jeffrey Chartier accompanied engineer William Rockefeller to his interview with National Transportation Safety Board investigators and described the account Rockefeller gave. Chartier said the engineer experienced a nod or “a daze,” almost like road fatigue or the phenomenon sometimes called highway hypnosis. He couldn’t say how long it lasted.


What Rockefeller remembers is “operating the train, coming to a section where the track was still clear — then, all of a sudden, feeling something was wrong and hitting the brakes,” Chartier said. “… He felt something was not right, and he hit the brakes.”
[Source: http://bigstory.ap.org/article/nyc-train-derailment-airs-queries-about-technology] 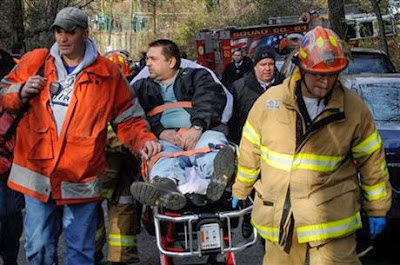 At this time we see that there are forces at work behind the scenes who are controlling the President and members of Congress. They are pushing them to drive recklessly, accelerating the pace of exorbitant government spending, heedlessly piling on massive amounts of debt; proudly promoting programs that are leading to increased moral degeneracy in the nation. As investor Jim Rogers recently reported, “This is going to end badly.” 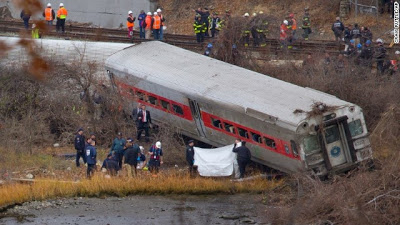 According to CNN, “The locomotive and all seven coaches jumped the tracks while barreling into a curve at 82 mph, nearly three times the 30-mph limit for the curve, according to the NTSB.” So too we see the governments of the world speeding ahead with reckless abandon toward the inevitable global collapse of the world’s present monetary systems. This will lead to civil unrest on a scale unknown to this, or any other generation. Satan’s servants have been making preparation for the inevitable societal breakdown. This is witnessed in the many executive orders issued by President Obama, granting the President, and various agencies under his authority, absolute power to wrest control of every facet of society in a time of emergency. The government is rapidly arming a domestic force to rival the military in size and funding. The people are increasingly being acclimated to draconian government control and oversight. The martial law declared earlier this year in Boston, one of America’s premier cities, was a test run for what will soon take place nationally. 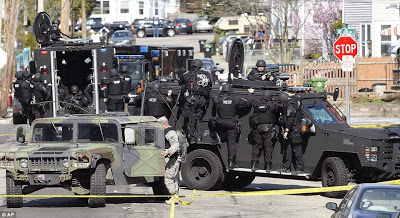 In a recent visit, Joe Boes shared with me that he senses that what is coming to America will be a sudden event. It will unfold quickly, catching many people by surprise.

Brothers and sisters, there is no reason for you to be caught by surprise. The Spirit has been giving many warnings of that which is to come. It is a time to prepare both spiritually and physically. It is a time to be sober-minded, considering all our actions, and weighing every decision, with utmost care.

Do not be caught up in the pursuit of mammon, in the vain pursuits of life. Remember the warning of Yahshua. He said the last days before His return would be just like the days of Noah (the movie Noah is to be released in March of 2014).

The earth must go through her birth pangs. Evil is increasing. Men and women are falling to a greater degree under the influence of spiritual forces of wickedness. Sin is increasing among the nations. Murder, abortion, homosexuality, and every form of moral vice are increasing.

Are you living in a significantly different manner than you were last year; five years ago; even ten years ago? Have you separated yourself from the pursuit of that which is temporal that you might inherit that which is eternal? Consider your ways! Stop, and take stock of your life and where it is heading. Do not be sleeping when the train runs off the track.

Ephesians 5:15-16
Therefore be careful how you walk, not as unwise men, but as wise, making the most of your time, because the days are evil.