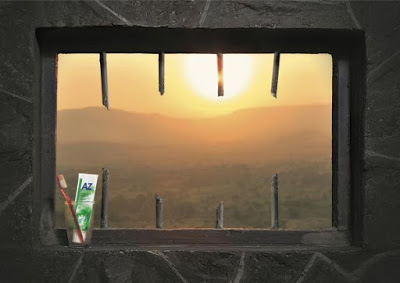 There are many ways to escape from prison. Not all of them involve leaving the prison facility. I was blessed this week to receive a letter from a man in prison whose correspondence I featured in a series of writings which focused on the Black Hebrew Israelite faction which is growing in popularity among black men in American prisons. You can find the posts detailing my interactions with this man in a Georgia prison at the following links.

Letter to a Hebrew Israelite in Prison
https://heart4god.ws/wordpress/2015/10/letter-to-hebrew-israelite-in-prison.html

It had been months since I sent my last letter off to this man. I was concerned that his silence was an indication of his having been offended with the things I wrote to him. I was surprised and delighted, to discover two days ago that this was not the case. Following is the letter I received from him.
—
Dear Joseph Herrin,


Thank you so much for your godly Love and teaching of the Truth because the Power of Darkness has been broken from over my life!


I NO LONGER follow the Law nor pray towards the East, but I am dying and now have took up my cross and follow the lead of the Holy Spirit! HalleluYaH!!


Amazing! One day I was about to teach a babe in Christ how to pray like that (Prostrated on the floor, facing the East), and he said, “OH NO!! I can’t do that. I’ll be going backwards!! Yahweh said to follow the lead of the Holy Spirit, and told me to die to myself and stand!!”


Brother, if you will, I’m missing some of the Parables and would like for you to print them out for me if you will. Here is what I am missing…


That’s it my brother. Here is the last of the stamps I have.


Love, Your Brother,
J.
—
At the initiation of Christ’s earthly ministry, He picked up the scroll of Isaiah in the synagogue and opened to the following passage which He read.

Luke 4:18-19
“The Spirit of the Lord is upon me, because he has anointed me to preach good news to the poor. He has sent me to proclaim freedom for the prisoners and recovery of sight for the blind, to release the oppressed, to proclaim the year of the Lord’s favor.”

It is encouraging to hear of men who are being set free from fleshly bondage and spiritual slavery. I rejoice when men manifest evidence of having their eyes opened to see truth.

The plight of men in prison is a difficult one. They exist in confinement, surrounded primarily with other men who are darkened in their understanding, in environs of great wickedness. There are some who manifest a sincere and intense hunger for spiritual food to feed upon, to have something of worth and personal benefit to fill the idle hours. Following is a letter I received from an inmate who recently had written to request some material and ask a few questions.
—
Hey Mr. Herrin,


It was really nice to hear from you. I’ve written over a dozen ministries. You are the only one who has wrote back. (Besides one a while back, but (the reply) was one they send to all who write them). And you wrote back pretty quick. I appreciate that a lot. I really do.


I received both your letters last night around 9 PM. I was really happy to see one big envelope slide under the door, then another (smiley face). Thank you. I won’t lie, I wanted to tear into them as soon as I seen your name, but I was in the middle of drawing my mom a Valentine’s Day card (She’s always my Valentine) and I’m not an artist. LOL So I told myself, finish the card and then indulge in literature. I honestly didn’t think I would actually hear a personal response back, but I thank you.


I want to say that I’ll probably read everything before breakfast (circa 6 AM). I love to read. Literally. I believe reading is peace to the mind as your mind settles on a particular matter or subject and you can nevermind a lot of distractions. Plus I love to learn. I’m 28, on my 11th year. This February 20th makes 11 years, locked up at 17, and I was in and out of Juvenile all my teens. So basically all I know is what I read and of course hear. Most people would see it or use it as a crutch, but I am a child of Elohim and am blessed to be loved and be alive. Even though sometimes my flesh hates at times that I lost my entire youth, Elohim shows me that this is nothing. The Kingdom of Elohim is my destination.


I also like to write a lot, too. But that comes from talking a lot. Everyone is always saying I’m preaching about something, not to get confused that I preach the word of Elohim, but I’m always speaking truth and letting people know there is a better way…


I’ve already read two of the writings you sent me in the packets, “The Usage of Divine Names” and “When God Changed the Menu,” and it’s only 2:48 AM. LOL Tomorrow I will grab my underlining pen… and do it again. (Wish I had a highlighter)


It’s kinda crazy, but a lot that has been a big ? mark in my mind, you’ve come to answer or show through your writing. One question. I completely understand your viewpoint and admire the great length you went into breaking down the Sabbath (and you sent only a part of the book). Well, I recently been praying on a specific subject and while reading Matthew 9:15, at the end of the verse it says, “and then they will fast.” Words from Yahshua. Now to me, I took it as Yahweh was showing me something and I honestly feel better when I do it. I don’t brag to people or tell people or make it seem I’m right, you’re wrong. I just do it for Elohim because it isn’t the Law of Moses, it’s the command of Elohim… to my understanding. Now, maybe in your book you have the answer, but all I got was a taste of potato salad and you kept the chicken and rice and baked beans (smiley face).


I pray that I do go home on the 29th. Before you go home they do blood work. That’s when you know officially that you’re going 99.99%. They usually do it a week before, but I’ve seen it done the day before. So maybe when you get this letter you can pray for me and maybe send out a small request for prayers for me. I told my mom that it’s OK if I don’t go home. I’ll still love Elohim. Yahshua is my Lord and Savior, and I told her I’m just little me in prison. Maybe if she and her church pray for me, maybe Elohim will see that we do have faith because I do, but I also know Yahweh does things in His time.


I will continue to write since I do not have anyone to fellowship with. This prison is Satan’s playground. I try not to judge, so I just give people good advice and tell them Elohim loves them.


Thanks for everything. I feel like we’re friends. I don’t have many. You should know it is hard to walk Yahshua’s walk in Satan’s parade. It’s OK though. It’s only a short period. May you be blessed for all you do. I could keep writing, but I know how I get. So take care and bundle up. It’s real cold.


Your brother in Christ,
Ruben
—
According to the Georgia Department of Corrections website, Ruben’s maximum release date is February 2030. Consequently, if he is not granted parole, he could remain in prison for a long time. I don’t presume to know what the Father’s will is for each individual, so I commend each one in prayer to the Father’s care knowing that He is perfect in knowledge and in His love for His people. At the same time, I pray for grace and encouragement to those who repeatedly get their hopes aroused in anticipation that they might be released. Some have gone though the process many times, having their hopes dashed.

Those who are released face their own set of challenges. It is often easier in prison to find within the motivation to walk uprightly when you know God is weighing your every act and your future rests on what Yahweh decides for you. Once a man is released from prison he is faced with many more temptations, and at the same time he may feel a lessening of motivation to walk uprightly before God. So please keep these men in your prayers.

I did print out another large packet of material for Ruben to read to help him pass the time. I told him I was not going to add him to the newsletter mailing list until after he knows if he will be released at the end of this month. As with other men, I offered to send him the newsletters whether he is in prison or has been released.