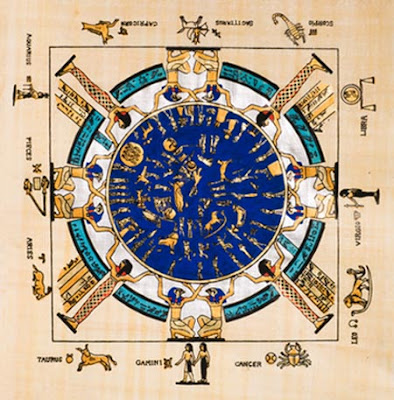 In order to interpret a heavenly sign, each element must be understood according to its divine meaning. From ancient times the stars and planets have been named, and the heavens divided into an orderly arrangement following the path of the sun in the heavens (the ecliptic). This 360 degree ecliptic is divided into twelve segments corresponding to the signs of the Zodiac, which in the ancient Hebrew was called the Mazzaroth.
Each of these 30 degree segments contains a major constellation and three lesser constellations called decans, a term denoting the ten degrees in which the minor constellation is found. There are therefore 48 constellations in the ancient Mazzaroth, or Zodiac, and twelve major constellations. Discoveries from ancient civilizations has revealed an amazing consistency in the names and images attributed to these ancient constellations, as well as in the names and meanings of the planets.
God established this heavenly testimony to declare His great work of redemption among mankind. The first of the constellations is Virgo, depicting a virgin giving birth. The last constellation is Leo, which symbolizes the Lion of the tribe of Judah who comes back to rule the earth. The ancient Egyptians entire religious system was based upon a corruption of these heavenly signs, for Satan is ever active to sow deception among those witnesses God has established.
For many long years the Sphinx in Egypt remained a great mystery until it was viewed in the light of the Egyptian religious system, which is based upon the stars and their constellations. 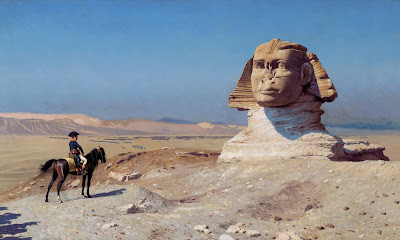 The Sphinx has the head of a woman and the body of a lion. Many wondered at the enigma presented in this figure, but it was finally unraveled. The Sphinx is a depiction of “the Way” in the heavens, a reference to the constellations and their messages as one follows the journey of the Sun on its course. The Sphinx begins with the head of a woman, an obvious reference to the first constellation Virgo, and it ends with the body of a lion, picturing the end of the Sun’s course as it concludes its journey in the constellation Leo. 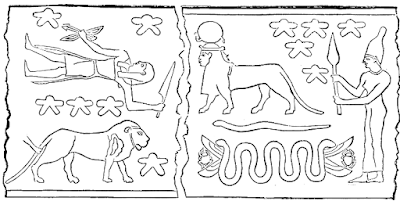 Image from the Temple of Esneh
A great clue to unraveling the mystery of the Sphinx was found in the Temple of Esneh in Egypt where an ancient sky painting is found on the ceiling of the portico. This ancient representation of the heavenly constellations is known as the Denderic Zodiac, and it is estimated that it is 4,000 years old, which would place it close to the time in which Abraham lived. Between the figures of the Lion and the Virgin is a small symbol of the Sphinx, representing the joining of the two characters. 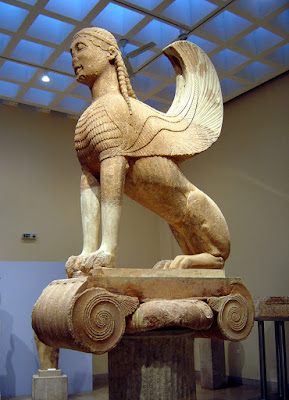 Sphinx of Naxos – Circa 560 B.C.
Although Satan has brought confusion and deception to man’s understanding of the message in the heavens, the original meanings are yet discernible. There are a number of excellent books available on the topic. One of the earliest books from recent times was written by Miss Frances Rolleston. Miss Rolleston was a very astute, well educated English woman who devoted her latter years to the study and compilation of ancient historical references to the Mazzaroth, or Zodiac. In her 80’s she published her magnum opus, which she titled Mazzaroth: or the Constellations. This book was first printed in the 1800s and has served as a main source for a number of authors who have taken the compilations of information provided therein and arranged it into a form more suitable for general consumption.
Among these latter books are The Gospel in the Stars by Joseph Seiss, written in the latter half of the 1800s. Not many years later E.W. Bullinger wrote The Witness of the Stars, of which I have a reprint of the 1893 edition. All three of these books can be read online, and they can also be ordered in printed copy from booksellers. I have one further book on this topic titled The Heavens Declare…, written by William D. Banks in 1985.
From ancient times the origin of the grouping and naming of the planets and stars has been attributed to Seth, the son of Adam, and also Enoch is mentioned as one who had great understanding of the starry heavens and their message. The oldest book of the Bible, and the only Old Testament book not written with a specifically Hebrew audience in mind, is the book of Job. This book makes numerous references to the constellations, and reveals that the ancients had knowledge of the constellations and the divine message they contained. This message is attributed to God, who is the One who set the stars in their places, and leads them forth through their circuits.
Job 38:31-33
Canst thou bind the sweet influences of Pleiades, or loose the bands of Orion? Canst thou bring forth Mazzaroth in his season? Or canst thou guide Arcturus with his sons? Knowest thou the ordinances of heaven? Canst thou set the dominion thereof in the earth?
KJV
The Pleiades are a major star grouping in the constellation known today as Taurus the Bull. Orion is the most brilliant of the constellations, being a decan in the constellation grouping of Taurus. Mazzaroth is a reference to the entire body of heavenly constellations. Arcturus is the name of a major star in the constellation known today as Bootes. Bullinger suggests that this constellation was probably known by the name Arcturus in ancient times. Arcturus is found in the segment of the heavens known by the major constellation Virgo.
As the author of the book of Job attributes the above words to God as He is speaking to Job, it is evident that the stars were arranged into constellations according to the will of God, and the knowledge of their testimony was passed on to man by God. There are many other passages of Scripture that speak of the heavens and their significance.
Job 9:7-9
He commands the sun, and it does not rise; He seals off the stars; He alone spreads out the heavens, and treads on the waves of the sea; He made the Bear, Orion, and the Pleiades, and the chambers of the south…
Isaiah 40:22-26
It is He who sits above the circle of the earth (the Mazzaroth)…, lift up your eyes on high, and see who has created these things, Who brings out their host by number; He calls them all by name, by the greatness of His might and the strength of His power; not one is missing.
Isaiah testifies that it is Yahweh that has given all the stars names. We can conclude that He has done so that He might make known to man His divine plan as it unfolds. In the first chapter of the Bible we are told that God has put the stars in the heavens “for signs and for seasons.” They are intended to make known times and events, and this is witnessed by the sign in the heavens that the Magi discerned to be a testimony that the King of the Jews had been born when the Son of God was born of a virgin.
Matthew 2:1-2
Now after Yahshua was born in Bethlehem of Judea in the days of Herod the king, behold, wise men from the East came to Jerusalem,  saying, “Where is He who has been born King of the Jews? For we have seen His star in the East and have come to worship Him.”
The Mazzaroth is a great testimony set in the heavens by Yahweh.