When Will These Things Be?

Matthew 24:3
And as He was sitting on the Mount of Olives, the disciples came to Him privately, saying, “Tell us, when will these things be, and what will be the sign of Your coming, and of the end of the age?”

It is normal for men to want to know when God will do a specific thing. I know in this hour when the Spirit is indicating that so many things are at hand, that many would like to know precisely when they will occur. When will the manchild ascend to the throne of God? When will the woman flee into the wilderness? When will the horsemen of Revelations 6 appear?

The Spirit’s answer to all of these things is “Soon!” I am looking daily with anticipation for the manifestation of these events. This is what God desires. He wants us to be expectant, and thereby to live in a state of readiness. He does not want His children to become complacent.

II Peter 3:3-4
There shall come in the last days scoffers, walking after their own lusts, and saying, “Where is the promise of his coming? For since the fathers fell asleep, all things continue as they were from the beginning of the creation.”

When I share with people the many signs the Lord is giving of those things which are soon to be upon us, many respond by saying that signs have been around for many years, and these things have not occurred yet. They respond that it may yet be years before we see any of these things. They are therefore not inclined to act as if these things are imminent. They do not ready themselves. They continue to do as the people did in the day of Lot and the day of Noah, not knowing that this may be the very day of the fulfillment of those things signified.

We are told that Noah was a preacher of righteousness. Yet we know that no one listened to his preaching. We are told that Lot went and found his son-in-laws and told them that Sodom was to be destroyed immediately, but it appeared to them that he was jesting. I should not be surprised to be met with a similar response in this hour. The Lord said that it would be just the same in the day when the Son of Man is revealed, and I would add “IN HIS SAINTS.”

One man wrote to me today and revealed that there has been some confusion about when I have believed some of these things would transpire. I apologize for not being as clear as I could have been. Back on December 13th when I wrote of the Father directing me to a forty day fast which would end the day before Barack Obama was inaugurated, I shared that I believed the timing was significant. It was significant in a number of ways, some of which I did not realize at the time. The day my fast ended was the date of my 24th wedding anniversary. The Lord indicated that I was to end my fast at sundown on January 19th, and I did not know until just about an hour before sundown that the precise time of Sunset in Macon, Georgia on that day was 5:55 P.M.. Only God could bring a 40 day fast to conclusion at such a precise time which indicated a fulness of grace. And I truly did experience a great grace during the fast. I could not believe 40 days had gone by so quickly.

In that post which announced God’s direction to fast, and those things to come, described as the anointing of His servants to shepherd His people through the wilderness, I wrote the following:

I have grown very wary of seeking to establish dates, for when an event does not occur by a certain time many begin to doubt the event altogether. I know there must be a time when the man child ascends, and according to Revelation 12, this occurs prior to the woman fleeing into the wilderness. Do we not anticipate this wilderness experience to be soon upon the people of God? Should we not then anticipate that the man child must ascend just as soon, if not before?… I have grown wary of setting dates for things, and I am not saying that the man child company (Joseph company, Elijah company, etc.) must be endued with power on January 20th, but neither will I rule it out. Joseph was brought before Pharaoh on the day that he received authority and power, and Satan will have his man being inaugurated on January 20th. Will not God raise up a standard against him?

I have tried to be careful to not declare that an event must transpire on a certain date, for God has not told me a certain date. He has told me these things must transpire soon. He is indicating that we are in the hour for these things to be fulfilled. I am open to the possibility that each day might bring the fulfillment of some prophecy of Scripture and some astounding work which is being signified by the Spirit to be at hand.

Today I read that the US Airways plane that crashed with a large number of Bank of America executives aboard had only been ascending for 90 seconds when the plane struck a flock of birds and lost all power. It had previously been reported that it had been ascending for three minutes. The time has been shortened.

We are in that brief period when the hopes of the nation are set upon Barack Obama and the men and women he has appointed to various high level cabinet positions. There is some euphoria and the mood of the nation is rising. Yet even as the air traffic controllers reported that they never saw the flock of birds on radar, so too will something unlooked for appear suddenly and the banking system will fail, the country will crash, and the US will be battered for many days.

People of God, even the lost can see that we are in a perilous situation. Renowned economist Nouriel Roubini reported this week that the banking system of America is insolvent. He declared that he anticipates that there will be $3.6 trillion dollars in losses and that the banks only began with $1.4 trillion dollars in assets. Congressman Ron Paul and others are declaring that the globalists and world elite are intentionally working to destroy the US economy that they might bring in a world currency and quickly advance their plans for a global government.

Satan is behind the events which will transpire. The Bible pictures Satan and his legions as the birds of the air.

Mark 4:3-4, 14-15
“Behold, the sower went out to sow; and it came about that as he was sowing, some seed fell beside the road, and the birds came and ate it up… The sower sows the word. And these are the ones who are beside the road where the word is sown; and when they hear, immediately Satan comes and takes away the word which has been sown in them.”

It was a flock of birds that caused the US Airways flight to lose all power. Satan is able to remove power from the kingdoms of this world that God has placed in His power. For many years America was protected, but due to her abominations and unwillingness to repent, God has removed the hedge.

Luke 4:5-7
And [Satan] led Him up and showed Him all the kingdoms of the world in a moment of time. And the devil said to Him, “I will give You all this domain and its glory; for it has been handed over to me, and I give it to whomever I wish.”

Satan has received authority to destroy America. Signs are being given. Two days ago I reported that the population of California had declined by 144,000 people last year (2008). I also mentioned that Dumitru Duduman had received a vision of California from God, hearing Him declare “This is Sodom. It will be consumed in fire.” Last year also saw California experiencing a record number of fires, hundreds of them breaking out after the Governor passed a law in favor of homosexuality. 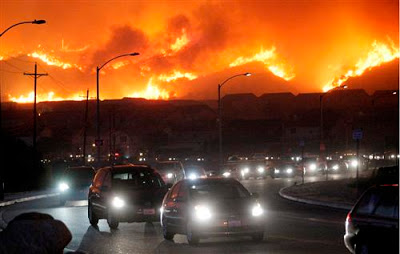 These events serve as a parable. God will now remove the righteous (144,000) from California even as He removed Lot and his family from Sodom. Then He will destroy it with fire.

Over Memorial Day week-end the United States was struck with a devastating hurricane that crippled the nation’s oil supply. The same week-end a catastrophic train wreck occurred in California. Metrolink 111 had departed UNION station and it ran full speed into a UNION Pacific freight train. 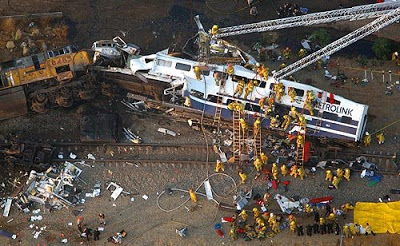 Now we have just seen Barack Obama take his oath of office upon the same Bible Lincoln used, and Lincoln was President when the UNION was faced with its greatest challenge, the secession of the southern states. We have seen this week a US Airways plane crash with Bank of AMERICA executives on board. 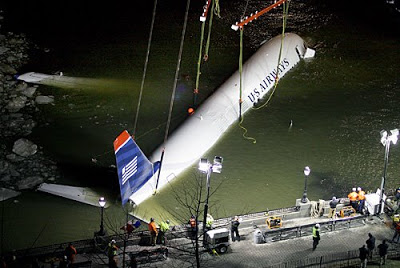 How loudly does the Father need to proclaim His warnings before His people begin to heed?

Yahweh is testifying that the horsemen are coming. When? VERY SOON!

The hour is late! Are you seeking the Lord to know what He would have YOU do in this hour? Are you taking the abundance of signs and warnings seriously? I cannot tell you the hour or the day, but the Spirit is declaring that these things are at hand.