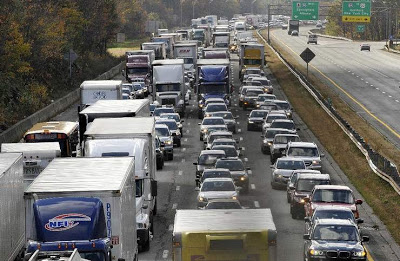 Randy and Kathy Furman, friends who live in the Arizona desert, wrote to me this morning and shared the following experience.

There was a bad accident late this afternoon on the westbound interstate between our exit (#71) and the next exit (#66).  We were out back working in the garden and started seeing unfamiliar cars wandering through the back roads.  We usually only have a couple of cars down our road every few days so this was unusual.  Randy approached one and found out about the accident.  The estimated time for clearing the road was about 5 hours so people were using their GPS to find a way around the roadblock.  The problem was that the GPS was giving them the wrong directions.  Randy pointed them in the right direction, then because more cars kept showing up, I drew out a map and made copies to hand out.  We decided to drive out to the pull out near the exit and direct people to the correct path.  One man was talking to a friend on the phone as he pulled up to us.  When we offered the map he said, “What a blessing.” And then said to his friend,  “See what happens when you trust God.”


A woman with her two daughters pulled off and we gave her a map, explaining how to get to the next exit by taking the back roads.  She was very apprehensive.  It was starting to get dark.  And Randy suggested that we drive and lead them.  The woman was very appreciative.  Two other cars joined the caravan and we led them down the back road to Petro and the on ramp to I-40.  Randy said that the woman reminded him of Much Afraid.  The people in the three cars trusted us to lead them through the wilderness.  They stayed close on our trail all the way.  As we drove we thought of the spiritual significance.  Miles and miles of cars and trucks were stuck on the broad way, but a remnant was willing to trust us and follow us down a very unfamiliar road.  By the time we got to Petro it was very dark.  We pulled over and two of the three cars came along side us to thank us and offer us money for gas.  We refused and told them to be blessed.  Much Afraid did not stop, but we saw her continue on toward the interstate.
[End of Letter]

Randy and Kathy have been following the Spirit of Christ through wilderness places (figuratively and literally) for many years. They have learned the ways of the Father and the necessity of an upcoming wilderness experience for all who would be numbered among the overcomers in Christ. Yahweh has been preparing forerunners who will be used in the hour that is very close at hand to lead a larger number of God’s people through their own wilderness way.

I have often compared what Yahweh is doing to the life of Moses. After being raised in Egypt, Moses was led to the wilderness at the age of forty where he spent forty years in the wilderness being humbled by Yahweh. At the end of this period Yahweh declared that Moses was the most humble man on the face of the earth. Then, at the age of 80, Moses encountered Yahweh at the burning bush. He was commissioned to lead God’s people out of Egypt (signifying the world) and to take them to their inheritance in the land of Canaan. For forty more years, Moses led the children of Israel through the wilderness.

We see the pattern of God taking a forerunner and doing a deep work in his life that he might be suited as a vessel to be used in powerful ways by the Father. Only humble men and women can be entrusted with the power of the ages to come. Yahweh will appoint humble men and women to act as shepherds for a remnant portion of the body of Christ who must also experience the wilderness. Not coincidentally, it was I40 that the traffic was backed up on. Forty is a number related to the wilderness and signifies trials and testing. 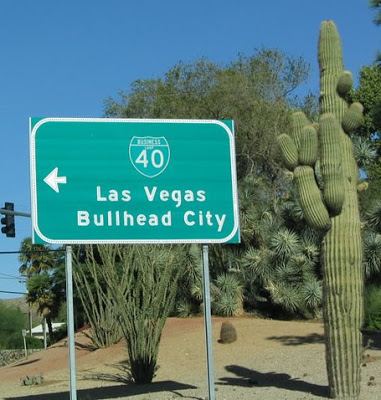 (There is a parable in the sign above for those who can discern the link between “Sin City” and the name below it.)

Although I was confident that Randy and Kathy had discerned the message that Yahweh was speaking through this experience, I wrote them back and affirmed what I saw, recognizing that this was an experience that would be profitable for the body of Christ to hear about as well.

—
That is quite a parable that the Father has set before you. I believe those things signified are very close at hand. The major accident on the Interstate would seem to represent that crash of the economy that is looming. As you may remember, earlier this summer as I was getting my trailer lights wired up at Camping World a man crashed into a light pole right across from where I was parked. The Father spoke to me then about the approaching crash. That same day as Randy and Veronica were driving me around I saw a hotel sign flashing 14:14:14 in military time. Fourteen denotes transition, and it seemed evident that it will be a time when the military must be called in to restore order. This was also reinforced by the fact that there was a VA motorhome right next to where the man hit the pole.

It is interesting to note that most people will stay on the broad path they have known. It is a remnant that will come off and take the way through the wilderness. Yahweh certainly gave you a profound parable of the various types of people who will take this wilderness path. Some, like the man who praised God, are bold and at peace because their hearts trust in Yahweh. At the other end of the spectrum are those like Much Afraid. They will follow this path halting and trembling. They will need much reassurance, and Yahweh will send shepherds alongside them to help them down the path.

It also seemed very significant that all this occurred as the night was falling. You spoke of it being very black by the time you reached the Petro station. With all the symbolism of The Dark K(night) Rising and Elton John’s song Good Morning to the Night, the Father is surely foretelling a time of much darkness that is coming upon the nations and the hearts of the people.

I also perceive a parable in that some coming off the Interstate were trusting to their GPS to guide them and it was leading them astray. You may also remember a post I had last year where I wrote of the phenomena known as “death by GPS.”

Right now I am in the midst of a study on the subject of propaganda, and how much it influences American society. I believe the system that many will pay heed to in the coming days that will lead many astray will be the Global Propaganda System. What the saints will need to do is turn off this influence in their lives, and listen to the voice of the Spirit as well as those saints who have gone before them who can show them the way.

Is it not telling that the GPS system worked fine as long as people stayed on the broad path, but when they tried to use it to navigate the narrow path it failed them? I appreciate you sharing this experience with me. I trust you will not mind if I make mention of it in a blog post as it has a lot of relevancy to the hour at hand.
—

A further thought on this experience is the sparsity of traffic that Randy and Kathy normally see near their property. I have twice visited with them in the desert, and it is a very remote place. Most of the roads are dirt, and there are few signs. It is very easy to get lost.

The Furmans spoke of only seeing a few cars every couple days. It is a rarity. So too has it been rare to encounter another saint traveling this wilderness path that all must walk who take up their cross to follow Christ. There are few who have surrendered their lives to be led of the Spirit, to go wherever He would lead, even if that is to journey through barren places where trials and tests are common.

The hour is near at hand when a larger company of saints must embark upon this journey. Yahweh has graciously prepared forerunners to encourage the saints, and to help guide them on their way.

Tragically, most Christians will be unwilling to leave the broad and heavily trafficked path they have been on. Even when everything is crashing and grinding to a halt around them, the broad path will appear more appealing to them than to venture off alone down a narrow path that they are unsure of. There will be some like the woman that Randy compared to the main character of Hannah Hurnards’ allegory Hinds’ Feet on High Places. They will be Much Afraid, but Yahshua will guide them with much tenderness and reassurance. He does not desire to lose any of those sheep whom His Father has given to Him.