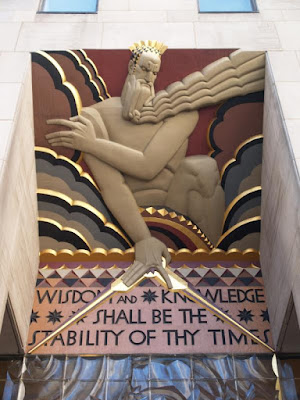 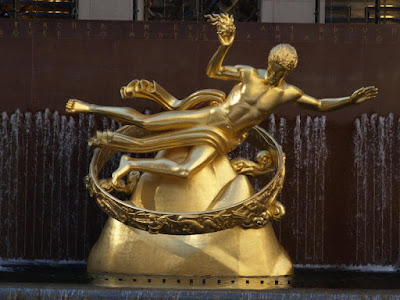 Prometheus Bringing Sacred Fire to Man
The statue of Prometheus bringing fire down from heaven and giving it to mankind, is one of the most evident pieces of art found on the Rockefeller Center complex. It is a re-telling of the story of Lucifer who offered to mankind the fruit of the tree of knowledge of good and evil. An Internet website shares the following commentary on this statue found on the Rockefeller property.
This statue depicts Prometheus, a Titan of Greek mythology known for his great intelligence. He has however betrayed the god Zeus by stealing fire and giving it to mankind. He is credited to have taught mankind the arts of civilization such as writing, mathematics, agriculture, medicine, and science. Zeus then punished Prometheus for his crime by having him bound to a rock while a great eagle ate his liver every day only to have it grow back to be eaten again the next day.
Paul Manship’s sculpture featured in the Sunken Plaza of the Rockefeller Center portrays Prometheus holding the fire stolen from Zeus and gliding towards humanity. He lies inside a ring in which are outlined the signs of the Zodiac. Behind the statue is an inscription saying:
“Prometheus, teacher in every art, brought the fire that hath proved to mortals a means to mighty ends.”
[Source: http://vigilantcitizen.com/?p=329]
Substitute the name Prometheus for Lucifer, and you will perceive the true substance of this monument. Lucifer was judged by God, not for a benevolent act on behalf of mankind. Lucifer’s fall actually occurred prior to Adam and Eve’s residency in Eden. It is described by the prophet Isaiah
Isaiah 14:12-14
“How you have fallen from heaven, O star of the morning, son of the dawn! You have been cut down to the earth, you who have weakened the nations! But you said in your heart, ‘I will ascend to heaven; I will raise my throne above the stars of God, and I will sit on the mount of assembly in the recesses of the north. I will ascend above the heights of the clouds; I will make myself like the Most High.’”
It is necessary to understand this history of Satan’s fall in order to properly perceive the symbolism present in the Christmas tree. It will perhaps come to some people’s minds that it is traditional to either place an angel or a star atop the Christmas tree. Though these symbols are commonly related back to the birth of Christ, this is merely the deceit of Satan. The star, and the angel, and  his own image. That the star and angels are commonly lighted relate to his name Lucifer which means “light bearer.”
The Rockefellers are far from being champions of Christ. If the Christmas tree were a symbol of the birth of the Son of God, then why would the Rockefellers have established a tradition of placing one of the largest, most expensive Christmas trees in the world in a central location at Rockefeller Center? There are no other symbols of Christ present. However, there are a great many symbols relating to Lucifer. Note the image of Prometheus, and its proximity to the Christmas tree. 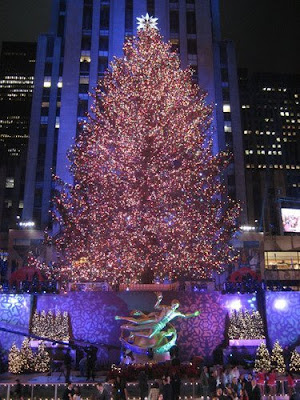 Rockefeller Christmas Tree w/Prometheus Carrying Fire
These two symbols are very much linked to one another. There is no disparity in the minds of Illuminists. To them the image of this fallen bringer of forbidden knowledge, and the lighted tree behind it, tell one and the same story. An interesting link in this story is found in an online news account of the renovation of the star atop the tree.
Star Redesigned as Comet
The star, now five years old, was made by the crystal manufacturer Swarovski, which had commissioned the designer Michael Hammers to design a replacement for an aging fiberglass star. Mr. Hammers’s star had 12 rays, spiky triangles of glass with 25,000 tiny crystals glued inside. All told, the crystals have a million glittery facets.
For the makeover, he decided to do more to project light through the rays. That meant adding the LEDs. Mr. Hammers said in an e-mail message from Beijing, where he is involved in a performance of Bach’s ”Christmas Oratorio,” that he had a comet in mind.
”Every star on a Christmas tree is a Christmas star,” he wrote, adding that many people suspect the original Christmas star was a comet.
Of course, comets streak across the sky like a certain sleigh with eight tiny reindeer, but that is another story.
[Source: http://query.nytimes.com/gst/fullpage.html?res=9F0DE2DA173AF93BA25752C1A96F9C8B63]
There is another being who is compared to a streaking star, a flash of light, as he was cast from heaven to earth.
Ezekiel 28:16
Therefore I have cast you as profane from the mountain of God.
Luke 10:18
And He said to them, “I was watching Satan fall from heaven like lightning…
Revelation 12:9-10
And the great dragon was thrown down, the serpent of old who is called the devil and Satan, who deceives the whole world; he was thrown down to the earth, and his angels were thrown down with him.
Satan seeks to portray himself as a victim of an unjust God. He declares himself to be an angel of light, a bringer of knowledge and truth. In one story he is depicted as Prometheus seeking to aid mankind, incurring great personal loss in the process. In other stories he is depicted as the Phoenix, consumed in fire, but rising to ascend again into the heavens. 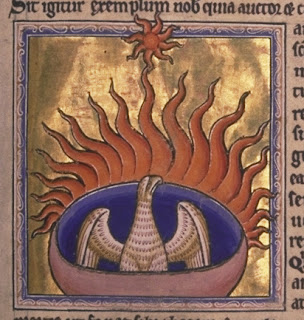 Phoenix – Note Rising Sun Image
The Phoenix is a very prominent symbol found in Freemasonry. Its image is on the cover of the standard book given to new initiates to this secret society. Its name is given to one of the most prominent organizations within Freemasonry.
http://www.phoenixmasonry.org/
There is a direct correlation between the Phoenix and the date established for Christmas. The ancient Babylonian mystery religions were based upon the worship of the sun and the moon. At Christmas a grand celebration was held to commemorate the victory of the sun over darkness. At the winter solstice the sun is in the sky for the shortest period of the day. It seems that darkness will triumph, but then the sun begins to arise once more, spending an ever greater amount of time in the sky each day after the winter solstice. This is Lucifer reborn; the light bearer ascending.
Another name found in antiquity for the worship of Satan is Baal (also spelled Bel). The obelisk is a symbol of the worship of Baal. It is closely related to Freemasonry and illuminati, for these groups serve Lucifer, and ascribe to the Luciferian doctrines, though those at the lower degrees or levels are given deceptive stories as to the actual rites and symbols employed.
The Christmas tree is a form of obelisk. The following pictures will reveal this better than any other argument I could present. 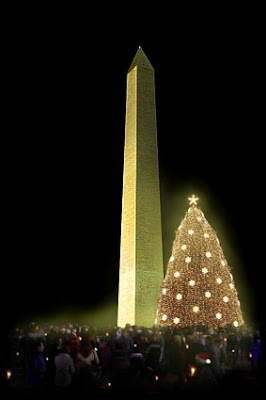 Christmas Tree and Washington Monument – World’s Largest Obelisk
Look at the following view of the Christmas tree at Rockefeller center. 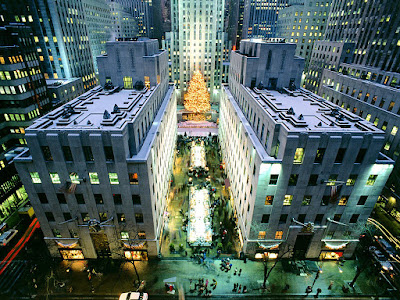 Rockefeller Center Christmas Tree
Does this bring to memory images of the Washington Monument at the end of the Reflecting Pool? 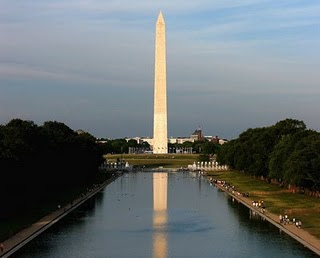 Washington Monument and Reflecting Pool
If these pictures do not establish the image in your mind of these two symbols representing the same thing, then look at the following. This is an image of Monument Square in Indianapolis. At the center of the circle is a great obelisk. Every Christmas (winter solstice) the obelisk is decked out and is hailed as the world’s largest Christmas tree. 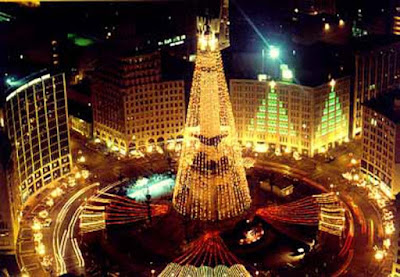 Indianapolis Monument Square
As is common among Illuminist depictions, the greatest light is placed upon the top. This star, or angel, which we find on the Christmas tree, is a symbol of Lucifer, the Light Bearer. He is the “all seeing eye.” 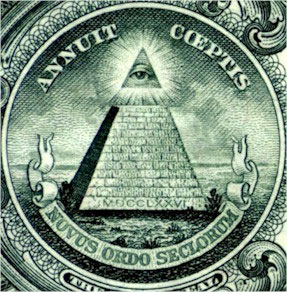 All Seeing Eye
The all seeing eye represents the fulness of wisdom and knowledge, the ability to perceive all things and understand all mysteries. This is the boast of Satan. He claims to be the possessor of all wisdom and knowledge. With much guile he offers to share his wisdom with mankind for their benefit. Look again at the image at the very top of this post. This is Satan bringing the gift of knowledge to mankind.
It is hard to imagine men who are devoted to serving Lucifer spending so much time and expense to set-up commemorations to Christ. A recent article recounted the labors of staff at the White House taking four days to set-up the Christmas tree in the Blue Room.
http://www.dailymail.co.uk/news/article-1336470/Obamas-Christmas-tree-takes-4-days-height-economic-crisis.html 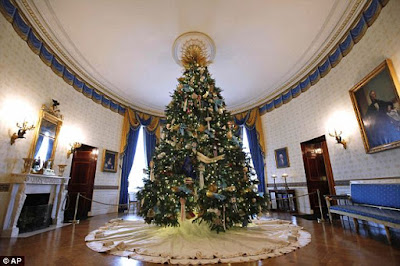 White House Christmas Tree
Those with eyes to see will note the aspects of Sun worship in this round room with the sunburst centerpiece on the ceiling. Indeed, the nation’s capital was laid out by a prominent French Freemason, and the White House is located at a position that figures as the head of Satan. 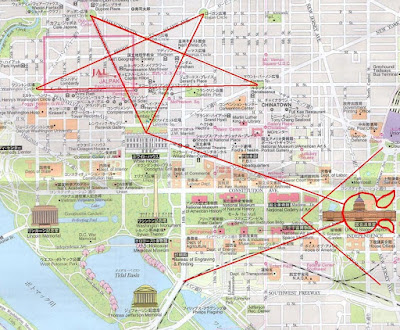 Washington D.C. Map
The inverted five pointed star is an occult image known as the Goat Head of Mendes. It is a symbol of the devil.

Goat Head of Mendes
Do you really think that the one who governs the United States (man or angel)  is seeking to honor Christ by setting up a Christmas tree in the White House? The same spirit that is pushing for the spread of homosexuality, the unrestrained murder of babies, and the robbery of the wealth of a people, is the one behind the setting up of this symbol. This long-time pagan ritual falls  at the time of year that sun worshipers counted as one of their high holy seasons.
It is well to be reminded of the character of the adversary with which we have to contend.
Revelation 12:9
And the great dragon was thrown down, the serpent of old who is called the devil and Satan, who deceives the whole world.
Christ was not born at Christmas. The Christmas tree was never given as a symbol by which to commemorate His life, or birth. Those who are servants of darkness understand the symbols they erect, but of Christians the saying is true:
Isaiah 42:19
Who is blind but My servant, or so deaf as My messenger whom I send? Who is so blind as he that is at peace with Me, or so blind as the servant of Yahweh?
Father, lead your people out of Babylon! Deliver us from all the deceit of that one who is so full of cunning. Lead us in the paths of truth for your name’s sake.