One aspect of the building of Solomon’s Temple that has always amazed me is that all the wood and stone was pre-cut before being brought to the construction site. We are given the following historic detail about the construction of this Temple which would surely qualify as one of the great wonders of the world.

Of course, there is a great parable in this detail, and it has great bearing upon the sons of God. Yahweh is building a house for His dwelling place. It is to be constructed of very costly stones. Yahshua was the most costly, and He has become the chief cornerstone.

I Peter 2:4-5
And coming to Him as to a living stone, rejected by men, but choice and precious in the sight of God, you also, as living stones…

The site of the construction of Yahweh’s Temple is a Heavenly location. All the stones are being quarried, hewn, and shaped through rough and painful processes far away from the site of their eventual placement. The realm of our shaping is here upon this terrestrial earth. It is here that the hammer and the axe and other iron tools are used to form us into the precise pattern which we are to bear to take our place perfectly fitted into the Temple in heaven which is the dwelling of God. (This is metaphorical, of course.)

I have at times contemplated the skill needed by those laboring on the Temple of Solomon. We often have instilled in us that ancient man was primitive, and has become more intelligent and skilled over time. I think that the opposite is actually true. Knowledge may increase in these last days, but not intelligence. The forefathers had great capacity for intellectual thought, as both the Scriptures and history proclaim. Just a few generations from Adam we read the following:

Can you imagine the intellect it required to be the first to create musical instruments, both string and woodwind? Or to be the first to develop the realm of metallurgy, fashioning implements from metals quarried and then refined and heated in the fire? Ancient men were not ignorant brutes by any means.

I thought of the task faced by Solomon’s laborers as I was cutting and shaping some paneling to go in the bus. Following is one of eight panels that I had to cut that had a similar shape. 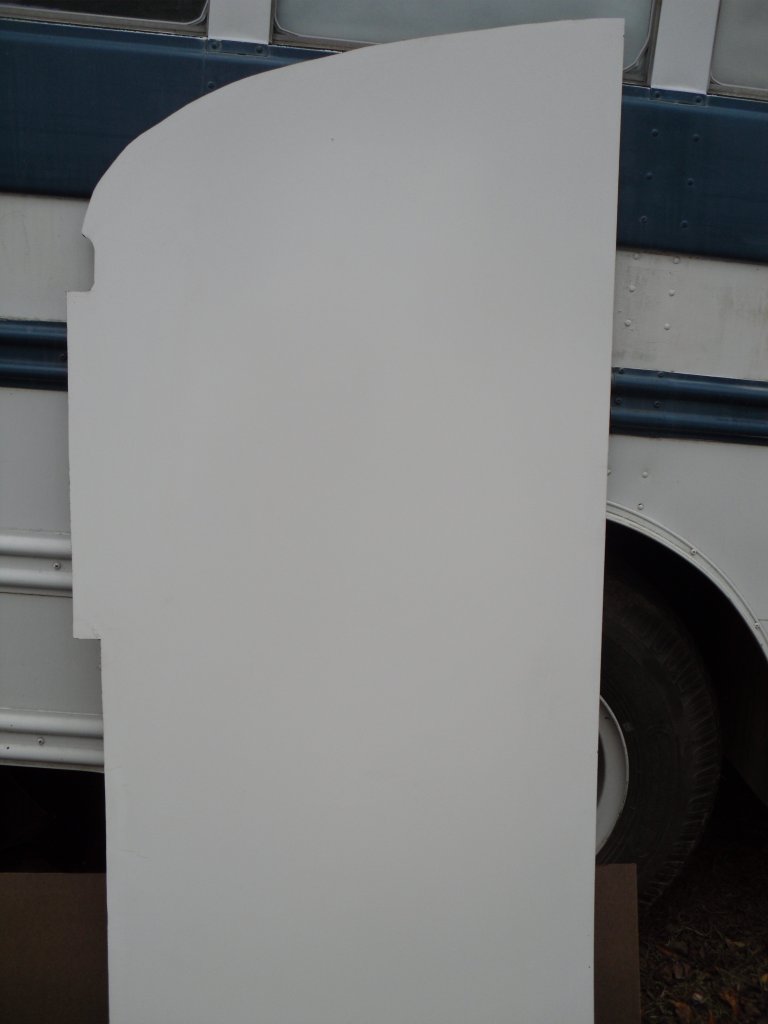 (Note: All images can be viewed larger by clicking on them)

The bus has a curved roof, and the curve flattens out toward the center, being steeper on the edges. This posed a challenge for me in cutting out the panels, as it was difficult to simply take measurements and draw lines with a straightedge. I ended up taking a large heavy piece of paper that had been a wrapper for a roll of insulation. I taped the paper to the end of the bus up at the ceiling, and I cut it out to fit the shape of the roof. I used this paper as a template to get the arch right.

Unlike Solomon’s workers, I had the advantage of using power tools. In this particular instance a jig saw for the curves, and a skill saw for the straight edges, were employed. Following is a picture of the panel in place. 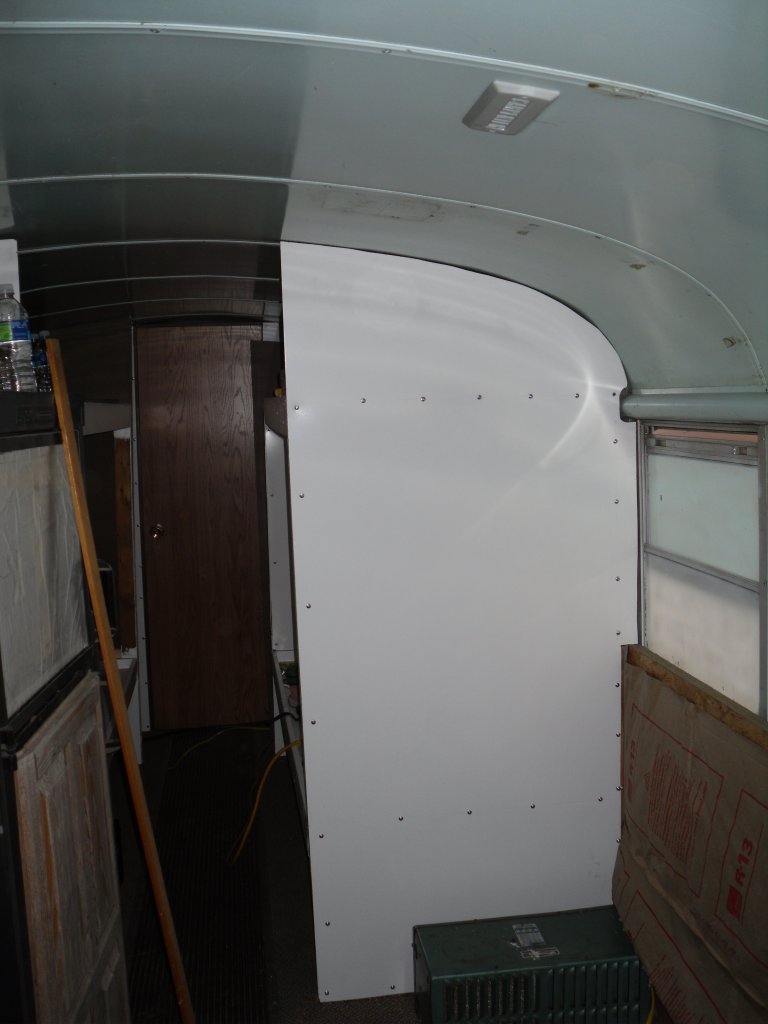 I have made much more progress since putting in these panels. The biggest event was getting the bus wired for 12 volt DC and 110 volt AC current. A few days ago I was able to go “live” by connecting to outside power. Following is a picture of the wiring distribution box, before I mounted it. 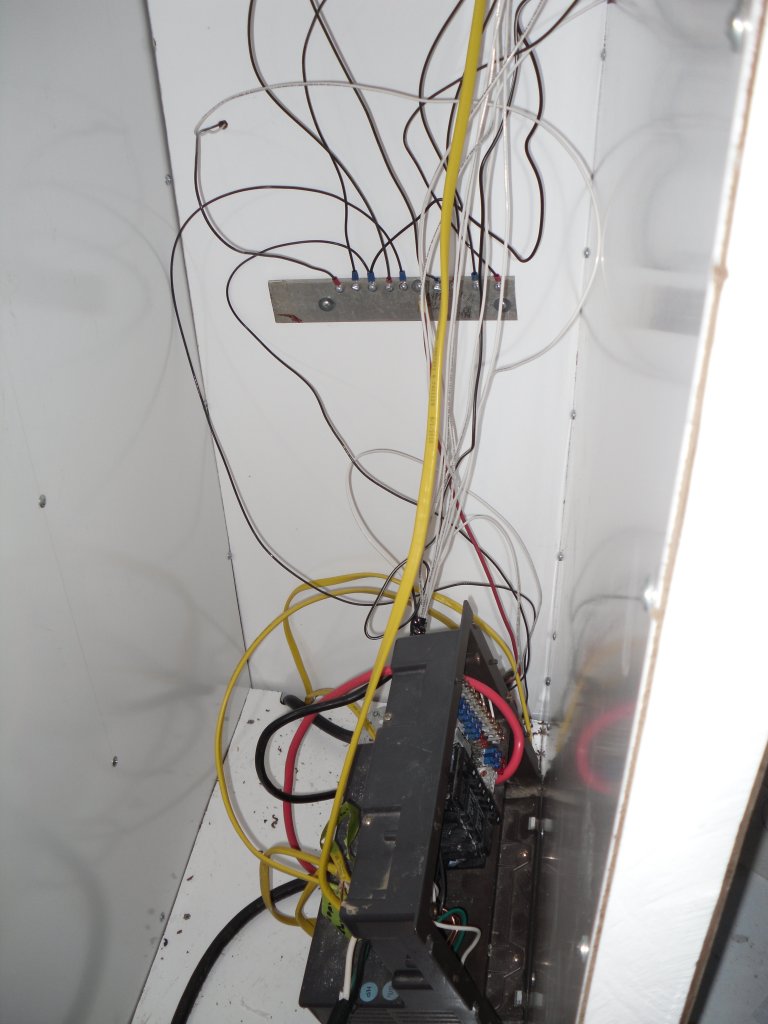 The distribution box was salvaged from the RV in Tennessee that Mike Mitchell generously made available to me. I am pondering the parable of the electrical distribution box, being convinced that such a key component that supplies power to the bus bears some significance. The manufacturer’s name for the box is oddly enough, World Friendship Company, and it is a model 8955, able to supply 55 amps of electrical power to the bus.

The distribution box plugs into “shore power,” which in the world of RVing refers to an outside electrical source. Ships use the same nomenclature when they are docked in port. This seems fitting since the Father has made reference to this bus serving as an ark, the original of which was a large ship.

Of course, one reference to World Friendship that came to mind is the following:

I do not believe, however, that this is the understanding Yahweh intends to convey through this device. I have every confidence that He is the One who has appointed this electrical converter to be used in the bus, and that He has chosen it with goodwill. Another possibility is found in the following passage.

John 3:16
“For God so loved the world, that He gave His only begotten Son, that whoever believes in Him should not perish, but have eternal life.”

It is true that the world has no greater friend than Yahweh, and His Son. Yahshua declared that “Greater love has no man than this, that he lay down his life for his friends.” Building an ark is a strange way to show love for the world, however. We read the following concerning Noah and what building the ark meant for the world around him.

Hebrews 11:7
By faith Noah, being warned by God about things not yet seen, in reverence prepared an ark for the salvation of his household, by which he condemned the world, and became an heir of the righteousness which is according to faith.

There is much to ponder in this passage. The faith and righteousness of Yahweh’s obedient sons and daughters serves to condemn the unbelief and disobedience of the world. The obedience of the one exposes to judgment the transgressions of the other.

I do not believe I have fully comprehended what the Father is speaking through this electrical distribution panel manufactured by World Friendship Company. Perhaps some of those reading this blog will be given further insight. 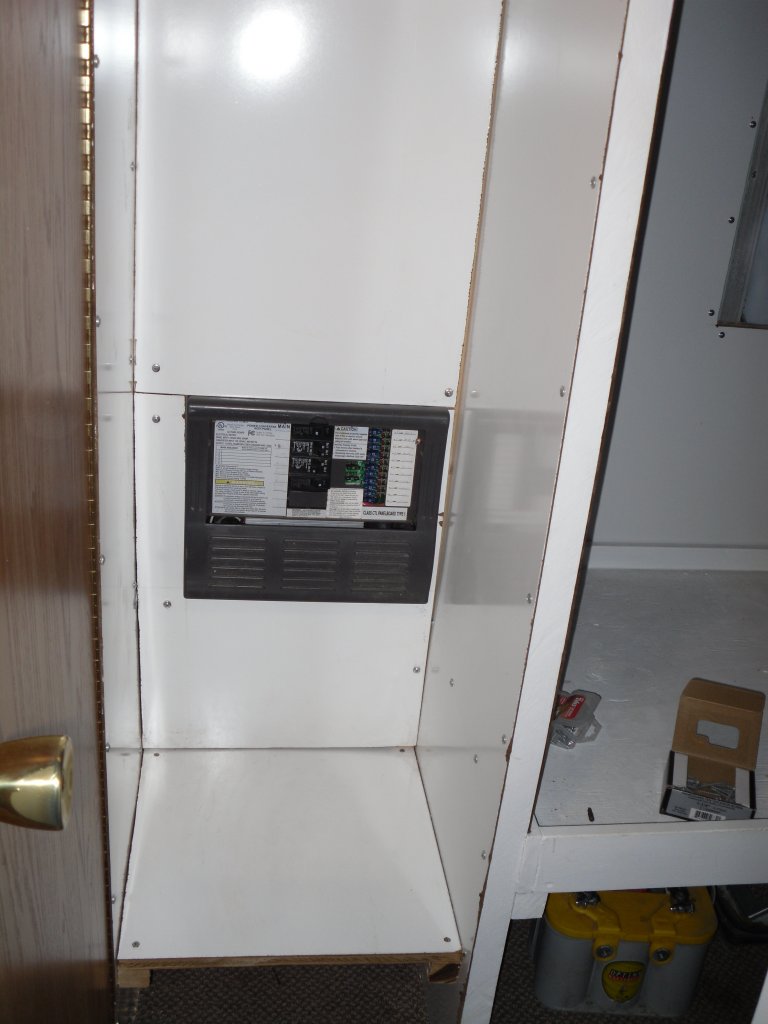 Another major milestone was getting the roof air conditioner mounted and wired. I began by taking some measurements, and laying out on the ceiling where it would be best to mount it. 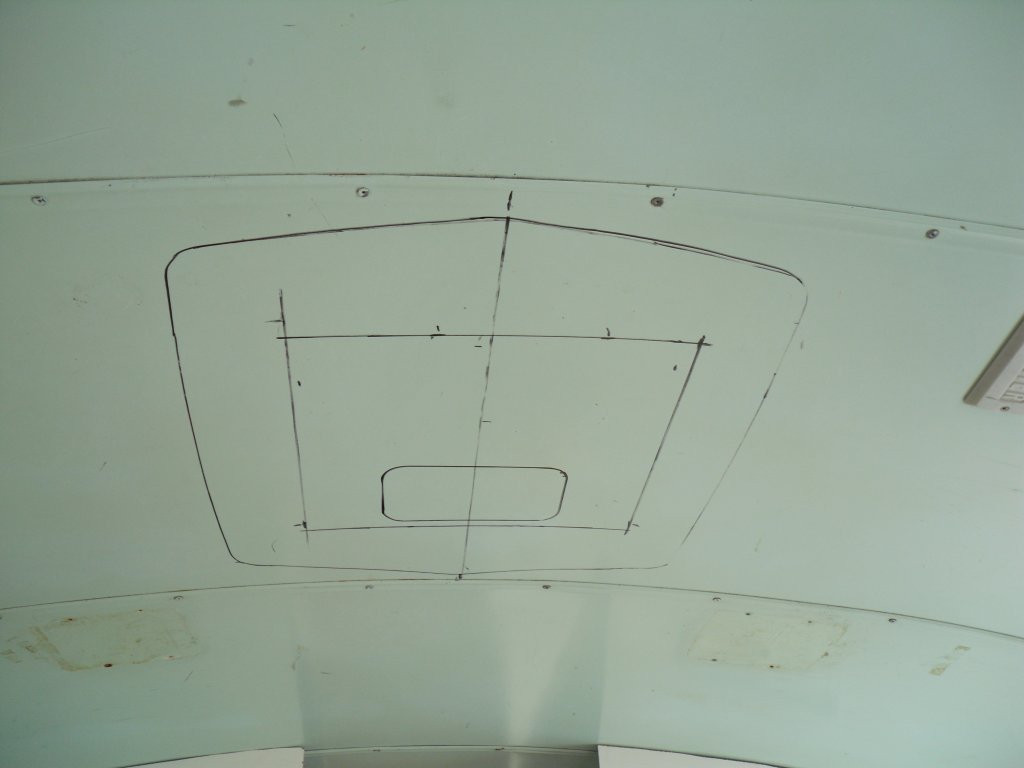 The square on the center, which measured 14″ by 15″ was all that needed to be cut out. The roof was also two layers of steel, but my Kawasaki reciprocating saw made quick work of it.

Following is an image of the air conditioning unit mounted. 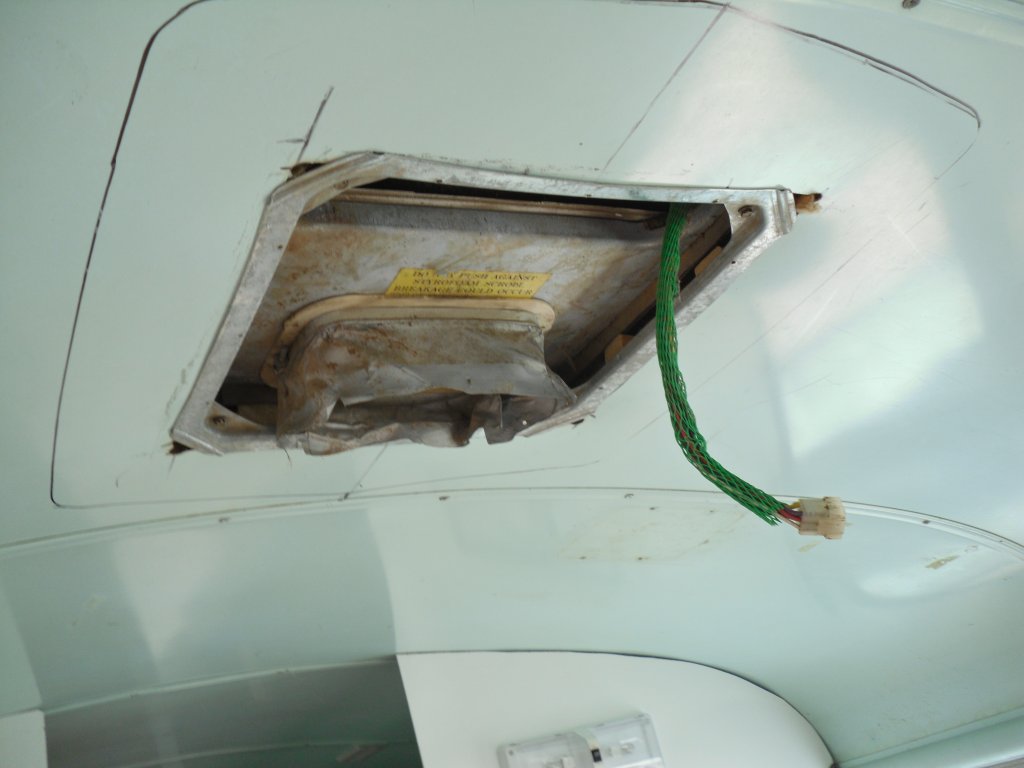 Installing the roof AC was a much easier job than I had anticipated. The grace of Yahweh was certainly evident, allowing me to make quick work of it. Upon plugging it up to power, it worked fine. It changed the outside profile of the bus, making it begin to look like a motorhome. 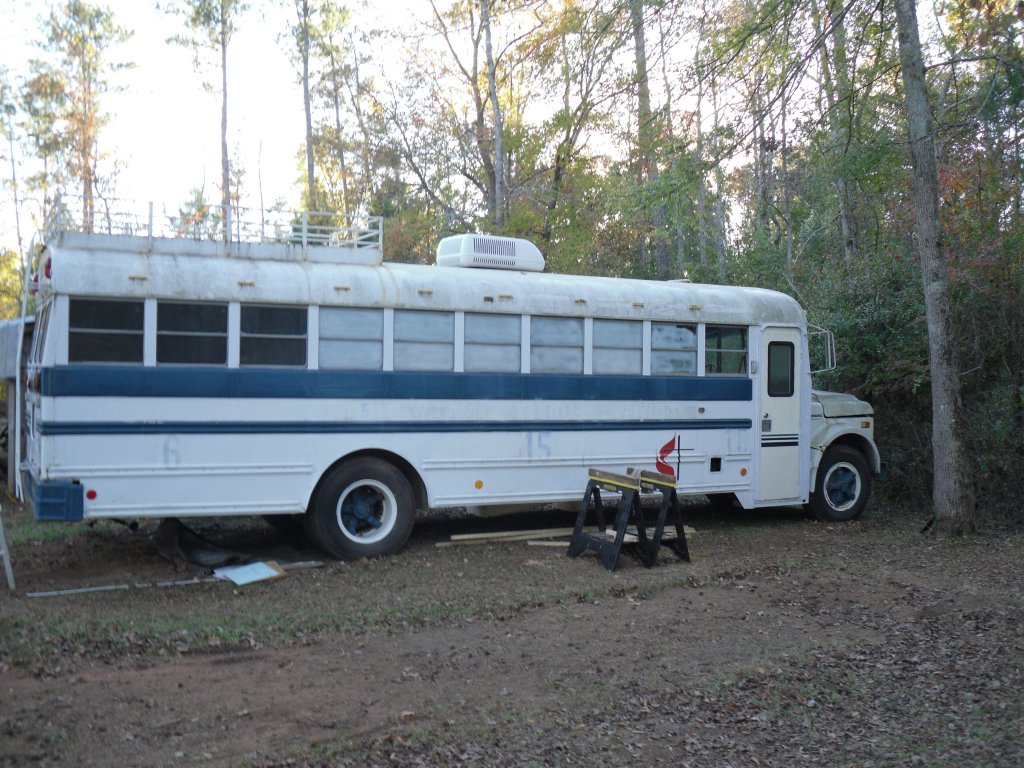 Bus with AC on Roof

You may note that when this picture was taken some of the windows were black and some were white. This is no longer the case. I scraped the paint from all the white windows yesterday and re-painted them with transparent black spray paint. I also painted the frames around the windows (inside) a gloss black, and trimmed out above them with white. Following is the end result after a day of spray painting. 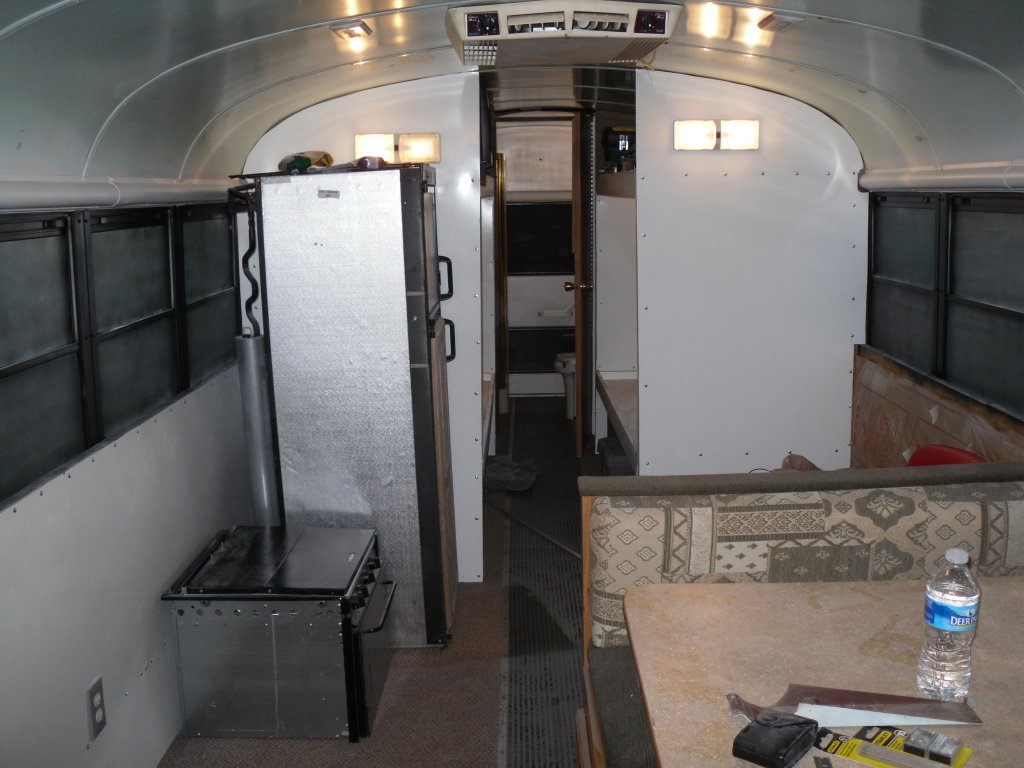 You may note some of the lights are on, as the bus is now electrified. The refrigerator works as does the roof AC which can be seen at the top of the photo. A great deal of progress has been made since my last update. I will include one last photo which shows the preparation work done to install the wood stove near the front door of the bus. 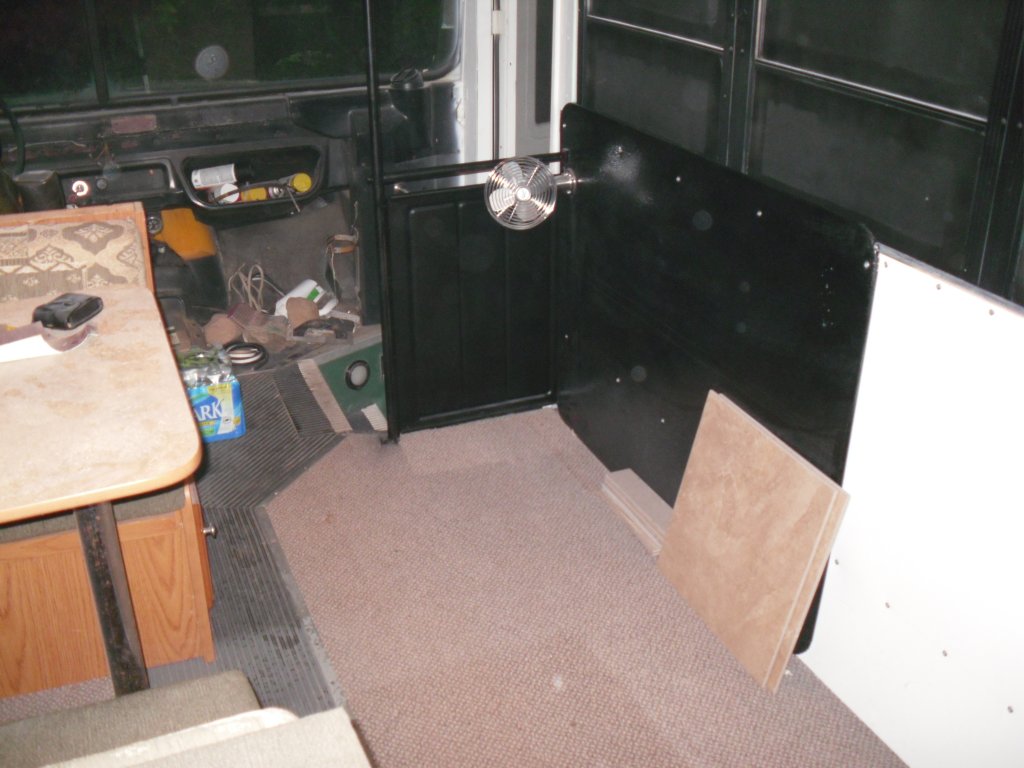 The black panel under the windows is a fire panel. It is made to go behind a wood stove to reflect heat and protect the wall. Note that a fan has also been installed to circulate the air over the stove to warm the back of the bus. That is ceramic tile leaning against the fire panel. It will be installed on the floor for the stove to sit on.

I hope those who write to me expressing a desire to read more blog posts will understand what has been keeping me from writing of late. I have been very much occupied with this labor at the direction of the Lord. His grace has been abundant.

I want to close by thanking those saints who have sent in financial support during this season. It has enabled me to continue to work on the bus. Although it has been done very economically, and I received the great blessing of receiving all the RV components from a brother, I have still found it necessary to sell the two gold coins given to me on my recent trip. I felt confident of the Father’s leading in this, and I am assured that there is also a parable in gold being a key component in the construction of this ark.

I have read some accounts of people who performed bus conversions for under $5,000, and I believe I will also be able to stay under this amount, which is rather incredible considering how wonderfully apportioned the bus is turning out to be. By the way, that $5,000 price tag includes the original purchase price of the bus.

For those interested in knowing where the expense has come in. Following is a partial list. (If Noah lived today, I think he would be very familiar with Home Depot.)