Philippians 4:19
And my God shall supply all your needs according to His riches in glory in Christ Yahshua.

When Yahweh calls us to a work, He will supply everything necessary to complete that work. What He is looking for in the hearts of His sons is obedience, a willingness to follow where He leads and to do what He asks.

Oftentimes the Father will call His sons to a work they are not capable of fulfilling in their own strength. They have neither the wisdom, the resources, or the skills to perform the work. Let that not these deficiencies discourage any from embracing the work the Father sets before them. Where He calls, He will make a way.

When Yahweh called Noah to build an ark, He did not appoint a man with experience as a shipwright. Yahweh provided the plans, the instruction, and the strength, for Noah and his sons to perform that to which they were called.

Genesis 6:14-15
Make for yourself an ark of gopher wood; you shall make the ark with rooms, and shall cover it inside and out with pitch. And this is how you shall make it…

Yahweh was with Noah every step of the way. We read that when the ark was finished that Yahweh filled it with all the animals. When Noah and his family had entered the ark, the Father performed the last work. He shut the door, sealing them in against the storm of judgment to ensue.

Genesis 7:16
And they that entered, male and female of all flesh, went in as God had commanded Noah; and the Lord shut him in and closed the door round about him.
[Amplified Bible]

Although my own task is not as great as that of Noah, the Father’s grace is just as abundant. He has gone before me, leading me each step of the way. Last year He directed me to purchase a bus, and recently He directed me to convert it to a fit habitation. I have previously shared how He has marvelously provided by leading a brother in Tennessee (the Volunteer State) to give freely the major components I will need to equip the bus.

Recently I began work hanging the waste holding tanks under the bus. These tanks were very long, a little of seven feet in length. They fit as if they had been custom made for the bus. When I lifted them in place beneath the bus frame they were such a perfect fit that they held themselves suspended in place while I was able to strap then in place. 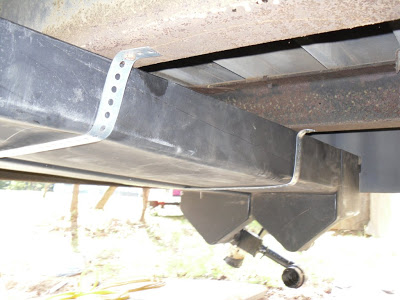 The tanks had holes pre-cut on the top of them for the toilet, sink and shower to drain into them. I needed to mount the bathroom fixtures over the holes, using the same floor layout as the RV from which the parts were taken. I could hardly have asked for a better layout, as the shower fit perfectly in the back corner of the bus, and the toilet was positioned nearby, with adequate room to move about. 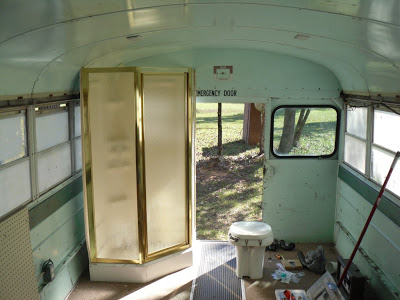 I had to make some modifications, but God sent everything I needed, including the know-how, to get the job done. The shower was not directly over the holding tank, so I had to route the plumbing beneath the bus from the bottom of the shower to the holding tank inlet. One of Mr. Stanfield’s sons was at his house that day, and he suggested that an old radiator hose would work great to form the curves and angles to get the plumbing routed properly. Mr. Stanfield said that he had an old radiator hose in his shed, and upon looking at it we found that it was the exact diameter needed. Both ends of the hose were different diameters, and one end fit perfectly to the shower while the other end fit perfectly to the pvc pipe I had salvaged from the RV. Mr. Stanfield even had hose clamps in his workshop that were the right size to connect the hose and pipes. 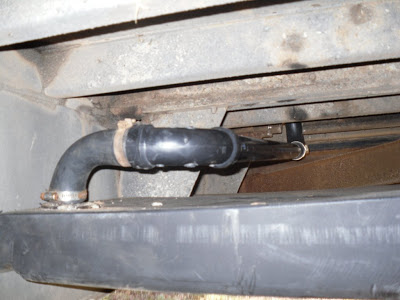 Having positioned the fixtures in the bathroom at the rear of the bus, I had to determine where to put the wall and the door for entry to the bathroom. I had salvaged the bathroom door from the RV in Tennessee, and stood it up in the center of the bus. Its height was perfect. 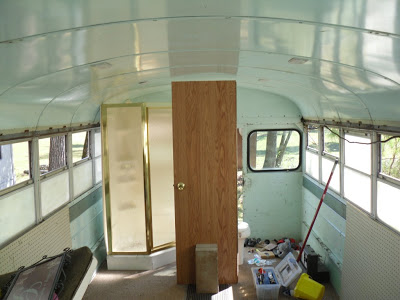 Having put the door there, I asked Mr. Stanfield for his advice on framing the wall. With a curved ceiling, it would require some unconventional framing. Mr. Stanfield has been used of the Father to help build several churches in his life, and has also volunteered his services after his retirement in helping others with their carpentry needs. He was able to advise me and the work went remarkably well.

Mr. Stanfield’s son Alan had even left some salvaged 2 x 4 studs under the bus. After I pulled all the nails out of them, and ripped them in two, I was able to use them as 2 x 2 framing. I attached the studs to the floor with bolts, and to the walls and roof with angle brackets. 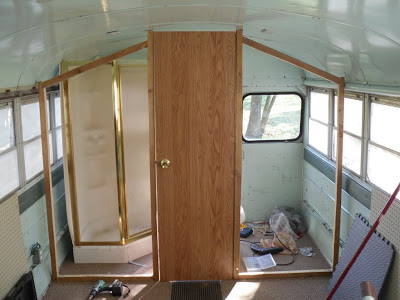 I won’t install the paneling over the frame until I am finished with all the plumbing and wiring.

The bedroom will be in front of the bathroom wall, and then the living area, kitchen, and dining area in the forward area behind the driver’s seat. This is a change from my original floor layout, being necessitated by the components I have received. The parts are dictating the floor layout to a great extent.

Next up is the task of building beds, positioning the kitchen sink, then mounting the potable water tank and hooking up the water lines to sink, toilet and shower. I have never done plumbing before, but I am confident that the Father will continue to lead and provide all that is necessary to carry out this labor.

Addendum: Following is a response I received from a sister in Christ regarding the recent posts on Jane Leade. I felt that she expressed things very well and wanted to share things with my readers.


Your writing on women in the church and your response to the young lady who was very upset at the governmental order as it should be understood, was very enlightening and refreshing. The Holy Spirit at this time is trying to reach the rebellious women who have allowed their souls to rule. There is chaos where El-Shaddai’s Governmental order is not followed. I hear from the Lord and my relationship is most strong when I allow The Holy Spirit to guide my words and my actions in patience and humility. Yes the female soul wants badly to sit beside and be equal to men. She wants to count. We do count, in a most profound way. Our actions as humble, quiet but contributing women must be in submission in all things. To give you an example…


Many times in my walk, I have come across a man or men who had a skewed interpretation of a particular verse or concept. I knew the truth, but asked The Holy Spirit to guide my words to correct the error. The Holy Spirit shut my mouth! He responded to me in all Love, “If you correct him, you will sin against me! I am capable of correcting his errors, am I not?”


This most valuable lesson of the One who sits as Head of all things is precious to me! I admit, at first it did not make sense to me, because my soul was trying to exercise its own will. Women want a “voice.” It is the way of the female soul. It will always be as such. We as women must understand that El-Shaddai in His Wisdom is not saying women do not count as much as men. He is stating, “All things in their proper order.”


It does not matter if a woman is correct and a man is in error. The woman should not seek to correct the error, when The Holy Spirit is capable fully of doing His job. The woman in the Body of Christ has plenty of important and wonderful jobs to do. There are many who are taught just by watching how a woman handles herself in everyday stressful situations. A woman can, as you stated prophesy and give testimony that is not in usurpation of her governmental placement. El-Shaddai does not state anywhere in Scripture, or through Paul or the other writers, that women are less important to Him. On the contrary…


The adversary wants women to be in rebellion… We should always be on our guard concerning this.


Thank you for being ever vigilant for The Body of Christ! Love from Dallas, Kelly Herman

Following are some news links of note that readers have shared with me. Due to my current obligations I do not have time to comment on them, but there are insights to be gleaned from them.