Job 5:7
For man is born for trouble, as sparks fly upward. 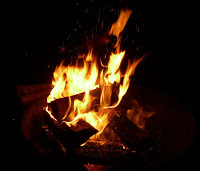 My Campfire on Jekyll Island

The Internet is filled with somber declarations of impending judgment on America and the nations. New watch dates are forecast almost daily, and many fall to the ground while the prophets present various excuses to salvage their reputations.

Daily there is something ominous in the news concerning the economy, the banking crisis, America’s pressure of Israel to divide up her land, the erosion of personal rights by an aggressive, sinister authoritarian government, the hyping of flu pandemics, etc.. I have not written much on these things of late, believing these things to be evident. The signs are everywhere of an approaching storm.

What is God’s purpose in sending all of these troubles upon the earth?

Troubles are not new to mankind. One need only read the Scriptures, both the Old and New Testaments, to observe that every age has had an abundance of troubles. Yet in this last hour, at the end of this present age, the earth is to experience troubles that will dwarf all that has come before.

Mark 13:19-20
“For those days will be a time of tribulation such as has not occurred since the beginning of the creation which God created, until now, and never shall. And unless the Lord had shortened those days, no life would have been saved; but for the sake of the elect whom He chose, He shortened the days.”

As the hour gets nearer for the sons of God to be revealed, mature sons who bear the unmistakable character, power and authority of the ascended Christ, the earth must experience birth pangs. These birth pangs will grow more severe and more frequent just before the sons of God are revealed.

Romans 8:18-22
For I consider that the sufferings of this present time are not worthy to be compared with the glory that is to be revealed to us. For the anxious longing of the creation waits eagerly for the revealing of the sons of God. For the creation was subjected to futility, not of its own will, but because of Him who subjected it, in hope that the creation itself also will be set free from its slavery to corruption into the freedom of the glory of the children of God. For we know that the whole creation groans and suffers the pains of childbirth together until now.

Paul declares that the sufferings manifested in the creation are birth pangs. Nowhere is this suffering more acute than among mankind, especially those who are experiencing the formation of Christ within themselves. There is no other method by which Christ might be formed and manifested among the creation than to subject it to suffering. Immediately after the fall of man in the garden, Yahweh declared this to be so in the form of a parable that is experienced daily around the world by tens of thousands of women.

Genesis 3:16
To the woman [God] said, “I will greatly multiply your pain in childbirth. In pain you shall bring forth children…”

Why did Yahweh choose to inflict this specific judgment upon the woman? It was not simply to punish. It was not because Yahweh enjoys inflicting pain upon His creation, nor because He was wrathful concerning the transgression of Eve. It was to reveal a very profound truth. The physical realm would serve as a parable of the spiritual realm.

There is no other means by which God might perfect sons, bringing forth offspring in His image and likeness, than by subjecting the creation to painful experiences.

Hebrews 5:7-8
[Yahshua], in the days of His flesh, when He had offered up prayers and supplications, with vehement cries and tears to Him who was able to save Him from death, and having been heard in respect to that which he feared, through being a Son, He learned obedience by the things which He suffered.

(Note: Young’s Literal Translation is much closer to expressing accurately this passage, though the phrasing is a bit awkward. Many popular translations make this passage appear to state that it was somehow an exception for Christ, while being a son, to have to be perfected through suffering. The more accurate understanding is that all sons must be perfected through this means. Christ’s experiences serve as a pattern for all who would be conformed to the image of God the Father.)

Returning to the parable of the curse spoken to Eve, we find that this first woman stands as a symbol of the Creation, of Israel, and of the Church. The creation is groaning in anticipation of the sons of God being revealed, in the same way that a woman groans in childbirth. The people of God have been especially singled out to be the portion of the creation out of which this man-child will arise. To be most specific, the Bride of Christ, that remnant portion of the body of Christ (Eve was formed of a remnant of Adam’s body, serving as a type) must experience birth pangs that sons in the image of Christ might be manifested to the world.

These pains while being experienced are a great grief, yet they are forgotten when a son is revealed.

John 16:20-21
“Truly, truly, I say to you, that you will weep and lament, but the world will rejoice; you will be sorrowful, but your sorrow will be turned to joy. Whenever a woman is in travail she has sorrow, because her hour has come; but when she gives birth to the child, she remembers the anguish no more, for joy that a man has been born into the world.”

Do you see the spiritual parable in Christ’s words? The suffering of the church, of those who are true disciples of Christ – following in His footsteps, is compared to a woman experiencing birth pangs. Christ declares that her anguish is forgotten when she sees what she has given birth to – a man child. Christ is signifying with these words that the suffering of the church is for the purpose of bringing forth mature sons in His image and likeness. There is no other means by which sons might be formed and revealed to the world.

Christ is our pattern man. He walked the path that was required of all sons if they are to be perfected (matured). We must follow in His footsteps if we are to also be manifested as sons of God.

Hebrews 12:1-2
Therefore, since we have so great a cloud of witnesses surrounding us, let us also lay aside every encumbrance, and the sin which so easily entangles us, and let us run with endurance the race that is set before us, fixing our eyes on Yahshua, the author and perfecter of faith, who for the joy set before Him endured the cross, despising the shame, and has sat down at the right hand of the throne of God.

We cannot arrive at the glory to come except by passing through these present afflictions. There is no other path offered to being seated with Christ on His throne.

I Peter 4:12-13
Beloved, do not be surprised at the fiery ordeal among you, which comes upon you for your testing, as though some strange thing were happening to you; but to the degree that you share the sufferings of Christ, keep on rejoicing; so that also at the revelation of His glory, you may rejoice with exultation…

A day will come when these sufferings will be behind us. The first things that all must pass through will give way to those things to come. John received a revelation of that day, and recorded the following:

Revelation 21:3-4
And I heard a loud voice from the throne, saying, “Behold, the tabernacle of God is among men, and He shall dwell among them, and they shall be His people, and God Himself shall be among them, and He shall wipe away every tear from their eyes; and there shall no longer be any death; there shall no longer be any mourning, or crying, or pain; THE FIRST THINGS have passed away.”

Before a woman holds a son in her arms, she must experience pain. Before we are revealed as mature sons of God we must also pass through the first things.

So many Christians in this hour have adopted a false mindset. Satan has deceived them, appealing to the passions and desires of the flesh, and its great aversion to suffering. He has persuaded them to adopt a view that they are to experience uninterrupted blessings at this time. Poverty, hunger, sickness, trials, suffering, reproaches, slanders, persecution, etc., are viewed as enemies to be assiduously avoided.

There are times when God would deliver men and women from such things, for the enemy of our souls seeks to make our way excessively difficult. Yet, there is appointed for EVERY son and daughter of God a cup of suffering from which they must drink. When we are presented with THIS CUP, we must respond as did the firstborn Son of God. 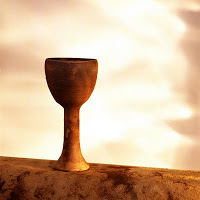 When the Father reveals that we must drink from a cup of suffering, we must not refuse it. It is intended for our perfecting as sons.

“Man is born for trouble as sparks fly upward.”

Why do you suppose the Scriptures use this specific analogy? Our ascent upwards is both a fiery path and a path of great trouble. We are all BORN for such things. We are destined to sit with Christ upon His throne, and the pathway to the throne is ever the same.

Let us hold fast to the will of God for our lives, not shrinking back from those experiences of suffering that our Father reveals to be for our perfecting as sons. He will surely walk with us through the fire. We will not suffer any loss. As the three men cast into the fiery furnace, the only thing that was consumed was the cords that bound them.

When we embrace those fiery trials before us, not only are we set free, but we will find that the Son of God has never been as close to us as He is when we willingly become partakers of His suffering. Though you may be cast alone into the fire, there will be two who walk there.

Romans 8:35-39
Who shall separate us from the love of Christ ? Shall tribulation, or distress, or persecution, or famine, or nakedness, or peril, or sword? Just as it is written, “For Thy sake we are being put to death all day long; We were considered as sheep to be slaughtered.” But in all these things we overwhelmingly conquer through Him who loved us. For I am convinced that neither death, nor life, nor angels, nor principalities, nor things present, nor things to come, nor powers, nor height, nor depth, nor any other created thing, shall be able to separate us from the love of God, which is in Christ Yahshua our Lord.