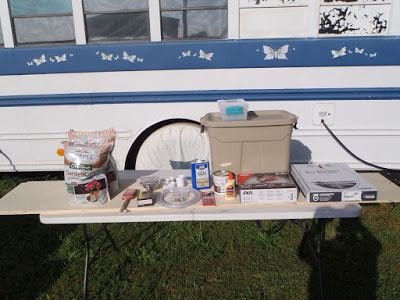 Some Supplies for My Compost Toilet

I had been used to dumping my holding tank about every two weeks in my daughters septic system. The access to it was about 90 feet away from where I was parked, so I acquired a number of hose extensions and ran them over to the drop every two weeks. I have thought of building a composite toilet one day, especially when I had to replace about three hoses a year due to leaks and breaks. The hoses are the least reliable part of a RV septic system.

A week before I bought the material for making a composting toilet, I had looked on the Internet at what was available. The cheapest composite toilet for sale that looked like it was built nice was the Nature’s Head toilet. http://natureshead.net/ 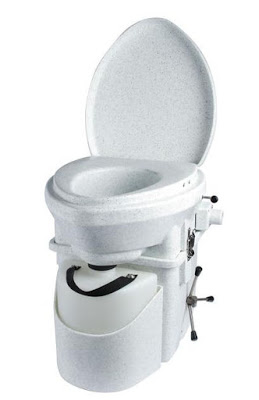 The Nature’s Head composting toilet costs about $960. It was one of the cheaper ones. Then came the news. My daughter may be moving to the outside of town. She has been out in the country for about 7 years. She asked me if I would be interested in viewing the place, and invited me to go over and look at it. It is a rental property that has been leased to some of my daughter’s best friends. We went over and saw where the motorhome would go and there was no place to dump black water (sewer water). I told my daughter that I had been contemplating a composite toilet for a while. There is no dumping of sewage with a composite toilet.

On behalf of my daughter, the location would be much nicer. It is right between her work and church. It would cut off 7 miles one way. The property is a rental house, not a double-wide like she has now. It is also not on a dirt road, so the wear and tear on her car would be a lot less. She would be able to invite people over to her house more often as it is right on the outside of town, only a few miles from her church. It is also about 2 miles from her place of employment.

It looks like a pretty good opportunity. My daughter has not made her mind up yet, but she is leaning toward getting it. The moving date would be the middle of May, so I had some time to get ready. I started on the composting toilet. Many people make their own toilets, so I felt adequate to make my own. Let me tell you a little about composting toilets.

First off there is no smell. I can attest to this by having mine in the RV for the past two days. If a composting toilet gives off any smell, it is the odor of the material put in the toilet for mulching. This can be peat moss, pine shavings, cedar shavings, or a variety of good smelling stuff. I have a mixture of pine shavings and coconut coir in mine.

To get a toilet that has no smell you have to divert the urine. Most of the reason that human manure smells is because people put it in with the urine. This keeps it wet and smelly. A correct way to handle it is to put the manure and the urine in different containers. When the urine is diverted it can be taken outside and disposed of in a catch pocket in the ground. I ordered one part for my toilet, and that was a urine diverter. 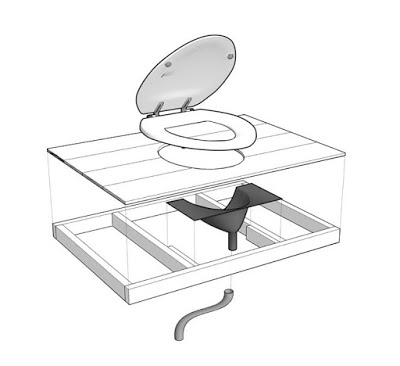 The urine diverter mounts to the underside of the place where the person sits. Mine will be a bit higher so the drain will go out the side of the compost toilet and in to the collection container. Below is a photo of my urine container and my spade. 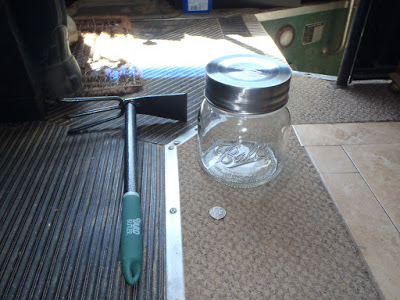 There is a quarter on the carpet in front of the jar to give it something to compare it with. It is a very wide and low jar to keep it from turning over.

I looked online for a wide range of models to get an idea of the one I would like to build. I found the following plan.
http://tinyhouseblog.com/tiny-house/composting-toilet/ 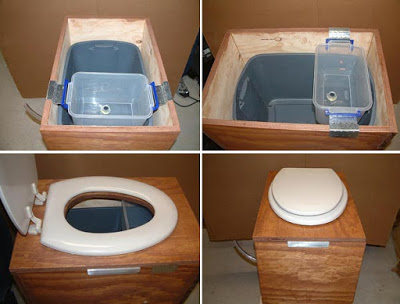 I copied the design above, except for the urine diverter. The homemade urine diverter had a rise where the drain is. This was a problem as you would have a certain amount that wouldn’t go in. Fortunately I saw plenty of diverters for sale, so I was not too put off by this aspect of the loo. I liked the large catch basin, as it allowed for a great deal of waste material to go into it before one would have to empty the basin. Most people use a 5 gallon bucket to catch their waste. A 5 gallon bucket has to be emptied roughly once a month. I figured the container I chose would only have to be emptied once every 3 months, or so.

Following is a photo of my compost toilet with the walls on. 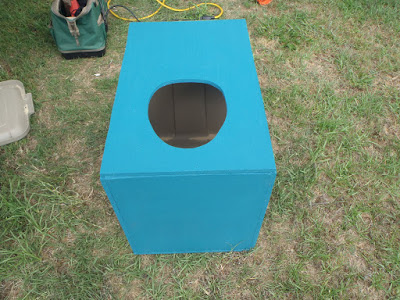 I glued the sides and put three nails per side. I found that I am still affected by the stroke I had almost a year ago, so I got George to help me with this. After I was done with the framing I had to go back to the store and get a hinge and a couple other things. I then put it all together. 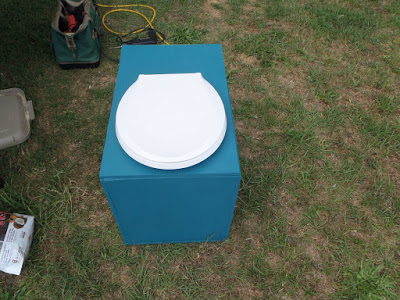 I put a long piano hinge on the back. Then I moved it inside before filling it up with pine shavings and coconut core. 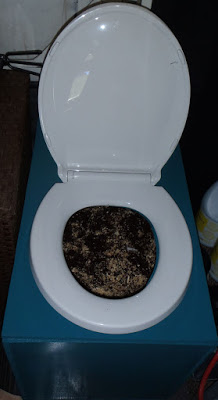 It looks filled to the top with the lid shut, but open the door and you can see that it has quite a bit of space left inside. 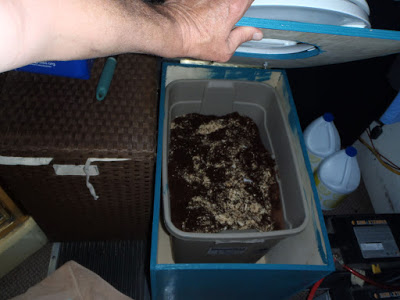 I only filled it up perhaps halfway. It is still waiting for a urine diverter up front. There was a large hole in the floor from the previous toilet that I covered with a clear mat. I then placed the compost box on top of it. I am still playing around with the location. I don’t like the current position it is sitting.

The end result: I spent considerably less that $960. I reckon I spent no more than $250 dollars on it. I did not have a jigsaw, so I saw this as a good opportunity to purchase one. You really could cut a rough hole under the seat, but I was impressed by how good a job George was able to do with the right tool.

A composting toilet is supposed to be good for the water that is saved. They are quite popular in Europe. Getting past the squeamishness is the hard part for Americans. Most of the world does not know what it is to flush a toilet, nor is there plans to get them used to it. Sewage is a big problem for major cities. A better solution is composting. Humanure is a great fertilizer.

Aside from working on this, I have been continuing to do things around here. I sold my old computer today. I had to run it to town to the UPS Store. I also got out and cut the yard yesterday. It’s getting pretty dry out. Well, I hope you got a little out of this. If you want to look into composting toilets a bit further there are the following aids.