Special Note:  I have had a number of people write to me asking for further clarification on the previous post that spoke of the cost of discipleship. The most common question is whether it is necessary for everyone to surrender everything they have to be Christ’s disciple. It is evident that more needs to be taught on this subject, and with the Lord’s empowerment and guidance I hope to be posting a follow-up in the next few days.

Today, I am going to leave you with the following post as I have a busy day planned. Randy Simmons is having his 45th birthday today, and I am going to Macon to spend some time with him. 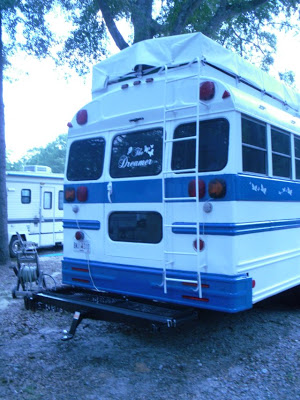 Back of “The Dreamer” with Motorcycle Carrier

In part one I shared how the Father has recently provided a motorcycle for transportation as He sends me out to minister to prisoners and the homeless. Yahweh has been gracious in revealing to me the best way to outfit the bus, and get all things in readiness for coming days of fruitful ministry.

I had for a time thought it would be necessary to carry a scooter or motorcycle on the front of the bus, as I knew I would need to pull my utility trailer behind it. A day or two after Yahweh provided me with a motorcycle, He led me to a motorcycle carrier that would be a far better solution than what I had envisioned. This carrier attaches to the receiver hitch at the rear of the bus, and it in turn has another hitch coming out the back so that a trailer can still be towed. 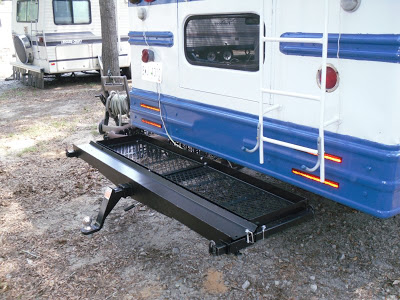 This is a far better solution for a couple of reasons. I did not wish to put more weight on the front end of the bus, for it already has a disproportionate amount of weight up front due to the location of the motor, the gas tank, and the holding tank for potable water. The rear of the bus is actually quite light, and it would be a far better place to carry additional weight.

Secondly, if I mounted a motorcycle up front, the headlights would be obscured, and I would have to mount auxiliary lights in front of the motorcycle carrier. This is not an issue on the rear of the bus, especially when pulling a trailer, for the trailer already has lights on the rear of it.

This particular motorcycle carrier is rated to hold 1,000 lbs., and the bike I will be carrying weighs less than half of that. I will also be able to carry a few extra things on the cargo area of the carrier, immediately behind the bus.

This same week, the Father revealed to me two other solutions to projects that I had long wondered about the best method of resolving. The first involved hot water in the bus. I had never hooked up a hot water heater, as I did not like the conventional solutions offered. I did not want to install a total electric water heater, for this would be a greater load on the electrical system, and would not function when an outside electric plug-in was unavailable. I also did not like the conventional solution of a gas fired RV water heater. These use a hot water storage tank, and because they must keep the water hot all the time, they are not very efficient and can quickly drain an RV’s propane tank.

Last week I received a magazine in the mail from an RV camping group. In it I noticed an ad for an “on-demand” propane hot water heater. This unit did not use a storage tank. Rather, it senses when water begins to flow, and immediately ignites and within five seconds begins to provide hot water. Because it does not run continuously, it is far more efficient. According to reports, a standard 20 lb. propane tank like one would use with an outdoor grill will provide a five minute hot shower every day for more than six months before it needs to be refilled. That is very efficient. 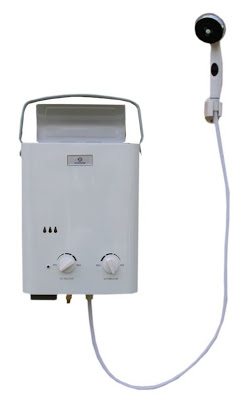 Hook up of this unit is very simple. You hook a water supply to one fitting on the bottom, and you hook the supplied propane line to a propane tank to the other connection. It has no pilot light, but instead uses two D batteries for an instant igniter whenever hot water is turned on in the RV. These units are also very inexpensive compared to other hot water solutions. Amazon sells this unit for $115.00.

The hot water heater must be installed outside the bus as the propane gas needs to vent to the exterior, but that should prove to be no problem for me, as I intend to mount it behind the bus, and then route the shower head inside to the shower which is at the very back wall of the bus.

I had also for some time been contemplating what to do with the solar panel I had purchased about two years ago. The answer came to me yesterday. When I was released from jail I found that the cranking battery in the bus was dead. It was not a deep cell battery and had been drained electrically down to nothing, effectively killing it. The battery receives some small draw from it constantly, and the only way to prevent this is to disconnect one of the battery posts. I did not want to have to do this, and a battery left for long periods without use will lose some of its charge even when disconnected.

One solution is to attach a solar battery maintainer to it. These devices use solar power to continuously send a trickle charge to the battery to keep it from being drained. I already have solar panels, so all I really needed to do was mount them on the roof of the bus and then run a line down to the battery through a solar power controller to keep the battery fully charged all the time.

I hope to complete both of these projects in the next week, as I already have the main components needed for both of them. Having understood what needs to be done is usually the biggest part of getting a job done for me.

Another project I was able to complete last week was the proper attachment of the heavy white tarp I had purchased to cover the storage area on the roof of the bus. The grommets along the edges of the tarp did not align properly with the attachment points on the roof, and the bungee cords I was using were not the correct lengths, so I knew I needed to do something different.

This week I got out and marked off the places where grommets needed to be placed, and I installed them. I then made custom length, white bungee cords, to fit properly and match the color of the bus and tarp. 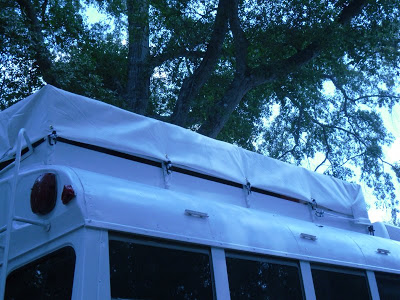 The tarp is now very well secured, and it is much easier to remove and reattach when needed. I also spent much of a day washing the bus, for it has been sitting underneath trees all summer long, and it was quite dirty. As you can tell, I have been quite busy recently, but God has truly been helping me to get things done quickly. I anticipate that the work He is preparing to open before me is also coming quickly.