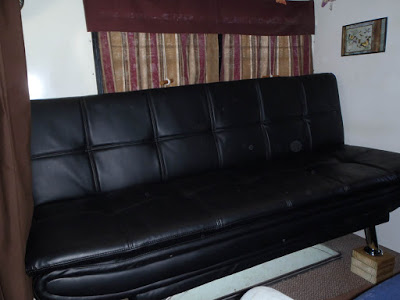 I took out one of the beds and installed a futon sofa today. I had been using the spare bed as a storage space. I thought it would serve better as a sofa. It is hard to imagine, but I had only one place to sit in my bus. That was at my desk. I found that I could sit somewhere else and not be tempted to browse the Internet. In the evenings I am too tired to write, and I don’t want to squander my time by browsing the Internet. I prefer reading, but I found it to be difficult to sit at my desk and read a book.

I really like the location of the futon. You’ll note that there are three 2″x6″ cut off and placed under each leg. Futon’s are notorious for being built low to the ground. At this height it is perfect to sit on the futon and prop my feet on the opposite bed. 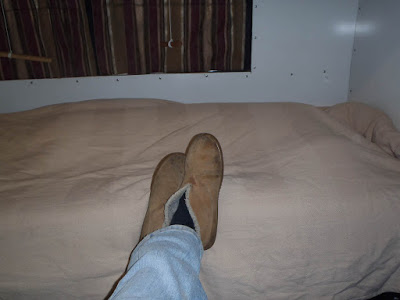 Nicholas came over and helped me move the futon into the bus. I bought one that would fit perfectly in the space, but it was more than I could do to get it inside the bus’ doors. After we got it in place Nicholas put the legs on and we set it upon the blocks to test for height. Once we got it right we nailed the blocks onto one another and set the futon permanently in its place. The futon can be used for a bed if the need ever arises. 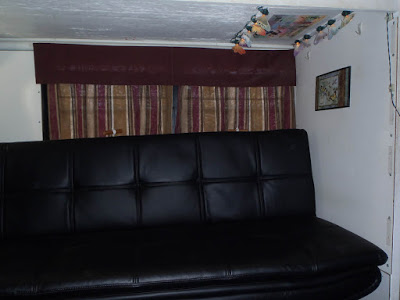 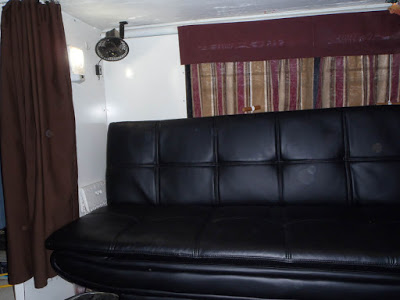 There is still plenty of storage space under the futon. Though the wheel wells are directly underneath it.

On another topic, I am going to have to get rid of Girlfriend. 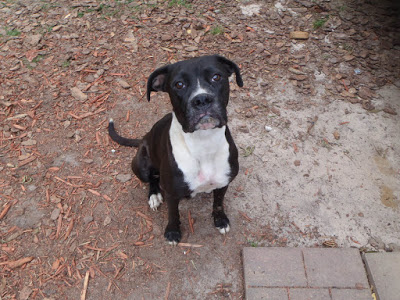 I can not picture Girlfriend on a leash. Champ is already on a leash and he would want to get near her. They would be tangled all the time. Champ is on a 100′ runner and he has a 15′ leader on the runner. I tried a wireless fence one time, but they don’t work very well with a metal framed bus. I have let Girlfriend run loose, and she hasn’t been any trouble to the neighbors until now.

If there are any takers for the dog I will be glad to hear from them. She would be good even with children. She is only aggressive with dogs who will embark on terrorizing other dogs with her. The Shih Tzu is temperamental. Girlfriend has been around it for over a year and it still barks at her every time it sees her. Girlfriend has been spayed and is about 3 years old.


On a last note, I have gotten a Frisbee goal to toss my Frisbees at. I was once quite good at Frisbee. Now I am barely able to throw them, though I have seen remarkable improvement since I have been using the goal. 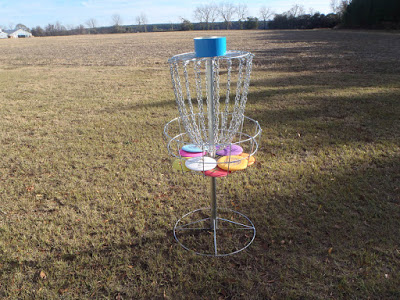 I am only able to fly them about 20 feet with my right hand. I am getting my release time back with my right hand. A stroke causes your reflexes to be distorted on the side of the body that has been impacted. It is strange that my typing is coming back much faster than my release on the Frisbee. The Frisbee goal is intended to help me with my reflexes. I am usually at home by myself so I have looked at something that I could do alone. I have only had the goal about two weeks, but I am noticing a steady improvement in accuracy. The Frisbees aren’t normally all in the basket as pictured. That is a holding pattern. They are normally scattered on the ground, though not far from the basket and some inside it. I use a small Frisbee for my marker to show how far I am throwing them. 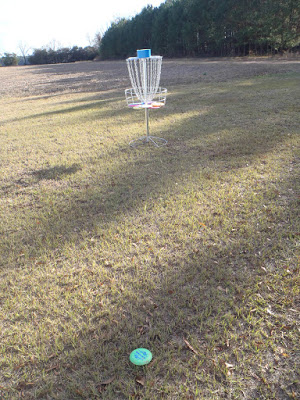