I had not planned to write a post today, but a brother in Christ, Daniel Eggers, sent me a link to a recent post he had written which made me aware of some events that are of great importance. I was unable to continue with my daily work on the new PARABLES BOOKSHELF for men and women in prison, until I had discharged the weight upon my spirit by sharing a brief word about this subject.

In recent weeks I have written about the deep sense that I have that a greater anointing is needed to carry forth the ministry appointed to me in these days and those just ahead. This need for more power is being sensed by a number of godly men and women, and Yahweh has been leading many to periods of fasting, prayer, and searching. Many have been made aware of their weakness in various ways.

I shared with you about the parable of my van’s battery dying and needing to be replaced.

More recently, as I have been staying in the home of an elderly brother in Christ, along with his grandson, we all experienced a bout of sickness. One of the chief symptoms of this sickness was a profound weakness, and a desire to sleep due to this weakness. After I had the sickness for about a week, and the others had it for several weeks, we all gathered to pray specifically for the Father to deliver us from this sickness. The very next day a noticeable improvement was felt, and I was very soon back to my normal health.

At the same time, I had encountered another problem with my van’s electrical system and was prompted to replace the second battery in it. (It has two batteries as it is a small motorhome.) I bought a second one, identical to the first, but found that it was not making a good connection to ground. The Spirit showed me how to correct this, and upon doing so, the electrical system is now working fine. It has lots of power, and is well grounded. Sounds like a parable to me.

One thing that I have desired to upgrade on my van is the headlights. When Randy and I went on a trip to Indiana a couple years back, we drove through the mountains at night on winding roads, and we noted how deficient the headlights were. The road was illuminated only a short distance ahead, and this made driving difficult, and more so when it is raining.

Since vehicles represent ministry, and Yahweh has spoken to me repeatedly through many different parables relating to my van, I felt that it would be very symbolic to have the lights upgraded before going on the road again. I also wanted to replace the generator with a high performance one, as my new batteries are able to be quick charged due to their high quality and construction. I prayed this past Sunday night that the Father might supply me with the funds to upgrade the lighting and replace the generator (alternator), and the very next day I received two gifts in the mail totaling $422. The Father reminded me of my prayer, and I knew I was to use a portion of this money to take care of this request.

It occurred to me also, that the date of the first meeting I have been asked to speak at as I go out on the road is April 23. This is 4-23. God sent me the money to upgrade the lights and power of the van in the amount of $422. I believe this is a testimony that the Father will supply a greater illumination and power on this trip as the days are late and the need is also.

This, however, is not the topic that I felt a need to express before returning to my other labors. The subject I wanted to share with you is related to a trip Barack Obama is planning for March 22 (3-22). Even as God’s ministers need a greater anointing for the days ahead, so too do the ministers of Satan. Satan has many things to accomplish in this last hour of this age, things which the Scriptures have prophesied. Both the kingdom of God and the kingdom of Satan will be progressing to a great climax at the end of this age, which we are now walking in. We will see the ministers of Satan bearing a greater anointing of evil, deception, and power to the advancing of his purposes, even as the ministers of Yahweh must receive power.

Below are links to two blog postings that I recommend on this subject.

Barack Obama has planned a trip to Borobudur, a Buddhist temple, on 3-22. 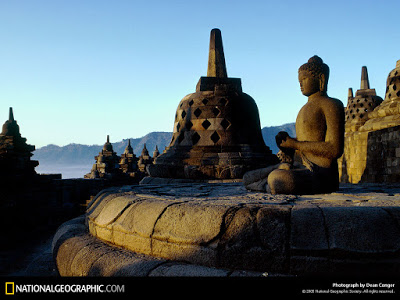 Borobudur Temple and Image of Buddha 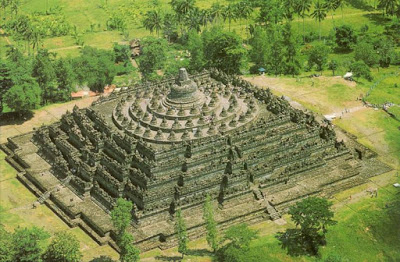 Some significant things about this trip are brought out in the links above. I will quote from the latter article.

The monument comprises six square platforms topped by three circular platforms, and is decorated with 2, 672 relief panels and 504 Buddha statues. A main dome, located at the center of the top platform, is surrounded by 72 Buddha statues seated inside perforated stupa.

Borobudur is a Buddhist shrine, to be sure. This shrine is more than about worshipping Buddha, it is about BECOMING Buddha, the future Buddha, Maitreya Buddha, to be exact. At the very top of this 10-terraced, man-made mountain is a stupa (a bell-shaped structure) that houses the “essence” of Buddha Maitreya. This stupa is considered to be a type of “cosmic womb.” Some believe it holds the “embryonic” Maitreya who is waiting to be born…

Today’s pilgrims won’t do this next part (and I’m sure we won’t be shown if Obama does it), but originally this temple was built by the kings of the Sailendra dynasty, between approximately 300 A.D. to 900 A.D. These kings were of the “solar god” mentality, believing that they were God-Kings and ordained by the Sun to their kingship. There was a ritual that took place at the very top of Borobudur for each king as he came to power. It involved him “bellowing like a bull” and “calling out to the North” that he was “Lord of the World” and that his father’s spirit now rested in him.
[End Excerpt]

If you look again at the image of the Temple, you may note similarities to other temples devoted to Sun worship. This stepped design is very similar to the Mesopotamian Ziggurat, which is the precursor for the temples of Sun worship that spread throughout the world. This same design is seen as far away as the Mayan temples to the Sun. The picture below is an image of a temple at Chichen Itza. 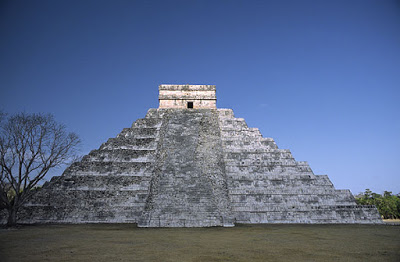 In the recent SuperBowl we saw a parable acted out of the Sun worshipers triumphing. This was Superbowl 44 and Obama is the 44th President of the United States. As I mentioned in the article on SuperBowl 44, it was held in SUN Life Stadium, in the SUNshine state on a SUNday.

Various news sources are reporting that Barack Obama has consented to wear a sarong and sandals while visiting the temple, as this is required by all who enter this “sacred shrine” to Buddha. Why is Obama visiting this temple on that particular day? Read the articles I provided links to, and you will find some of the relevance for choosing this date as it relates to Ostara and Easter.

Satan is the one who guides his ministers to their appointments. The Illuminati (enlightened ones) choose the dates for their actions very carefully. It is mentioned in one of the articles above that the Georgia Guidestones were dedicated on March 22, 1980. It will be precisely 30 years later that Obama visits Borobudur. If you are not familiar with the Georgia Guidestones, they are an Illuminist manifesto for the world. On them are recorded ten commandments for the new age, one of which is that the world should be brought to an ideal population of 500 million. This will require that over 6 billion people be removed from the earth. You can read more about the Georgia Guidestones in an earlier post on the Parables Blog.

The number 322 is very significant to the occult and Illuminists. It is well known that both Bush Presidents were members of the secret society that met on Yale’s campus known as Skull and Bones. Below is the symbol for this organization. 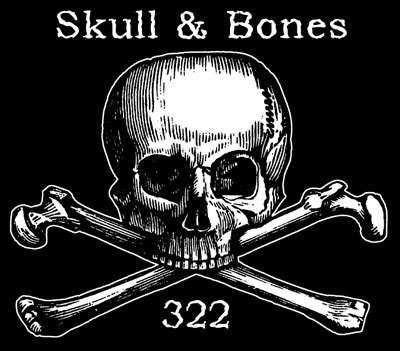 You can see this image in the following picture in which George W. Bush is standing just to the left of the clock. 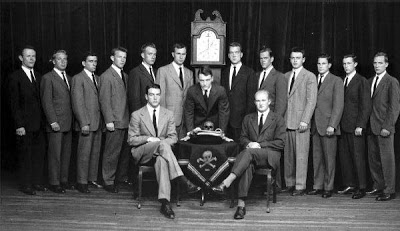 Whatever other reasons for Barack Obama to visit this Buddhist Shrine on 3-22, I believe that he is being led to go there to receive a greater anointing to carry out the destructive agenda of Satan for these last days. As bad as things have been for America of late, they are about to become cataclysmically worse.

Satan comes only to “kill, steal and destroy.” Though his servants masquerade as apostles of righteousness, their goals are the same. America’s citizens have been systematically looted by those in power. The wealth of a nation has been transferred to international bankers and illuminists who are carrying forth Satan’s agenda. Soon we will see death in abundance to be the portion of those in this nation as well. What sort of anointing would one anticipate someone to receive on 3-22 with its association to the skull and crossbones?

Should you be fearful? No. Should you be walking wisely in this hour, seeking to be led of the Spirit in all things? Absolutely!

The earth has been shaking recently, in record proportions. The recent earthquake in Chile was near the city of Concepcion. The earth must go through its birthpangs as the sons of Yahweh are brought forth. Satan too has a counterfeit conception, and he will not be lacking in bringing forth his manchild who is adorned with his cunning and power to accomplish his purposes in this hour.

Through it all, Yahweh will have a people who are brought to the fulness of the stature of Christ.

Now, I can get back to my other labors. (Pun intended)