My recent work on “the ark” has involved installing various useful applications of fire, both for cooking and heating. I had salvaged a large propane tank from the RV that Mike and Donna Mitchell made available to me. It is twice the capacity of the one in my van, and about four times the size of a typical tank on a barbecue grill.

The tank is heavy, being completely full of propane. I wondered how much of a chore it would be to mount the tank under the frame of the bus as it weighed well over a hundred pounds, and was bulky and round. The underside of the bus is steel construction, and has steel supports run at even intervals across the underbelly. I had hoped that the mounts on the propane tank would align with the supports, and in fact they did. It was almost as if they were designed for the bus. 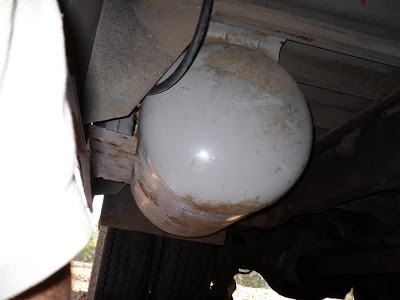 Every fourth brace under the bus was T shaped. At either end of the propane tank there was a flange mounted on the top, and it rested perfectly on the T brace on one side while it was bolted to another T brace. It took a little figuring to measure and drill all the holes before lifting the propane tank into place. Randy Simmons assisted me with raising and bolting the tank in place. We used a hydraulic jack to raise it and hold it while it was being secured. It is now hanging very securely. 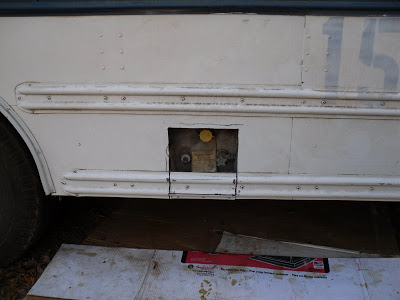 I had to measure and cut the access hole prior to mounting the tank as it would interfere with cutting. I will dress it up the access hole later with some type of cover, and most put a coat of fresh paint on the tank. All I need now is to get a piece of copper tube with the appropriate fittings on either end, and I can hook the tank up to my oven/stove combo.

My next project was to get my woodstove in place. I began by laying out the ceramic tile I had purchased to go under the stove, and tracing around it on the carpet. The carpet was installed onto a rubber mat that lines the entire floor of the bus. I cut out a section of carpet and rubber mat so I could attach lay the ceramic tile directly onto the steel floor. 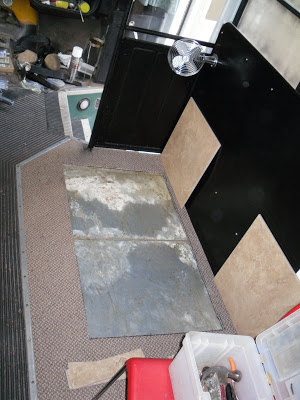 I could not apply the ceramic tile with normal adhesives, as it is generally laid onto a porous surface such as concrete or rough plywood. I had to find an adhesive that would bond to both ceramic tile and steel. I found some suitable that comes in a tube like caulk, and I laid it down. 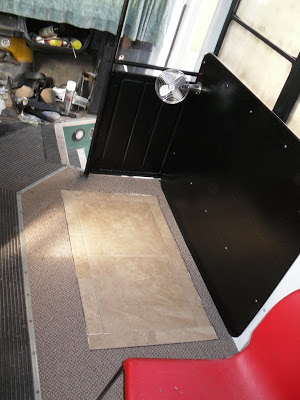 This was the extent of my labors on Thanksgiving Day, as I was engaged most of the day visiting with people gathered at my host’s home. My daughter came by in the afternoon and saw the bus for the first time. I believe we had 22 people in attendance and we were blessed to have Kristin play a few songs she had written.

The next day I sanded the woodstove I had acquired. It is not terribly old, perhaps ten years or so, but it had been outside for some time, and had been neglected. It needed a good sanding, and I had to chip off the scale rust in a few spots. I then painted it with some high temperature header paint I purchased at an auto parts store. It is rated much higher than the barbecue grill paint I looked at elsewhere. Most of them were rated to 1300 degrees, but the header paint was rated to 2000 degrees. 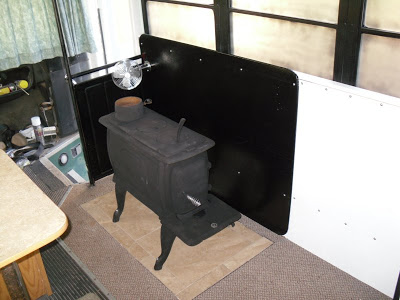 Bolting the stove to the floor of the bus was a bit if a chore. I had to use one drill bit for the cast iron legs, then switch to a different bit that was designed for cutting through ceramic tile. The ceramic tile drill bit cost ten dollars, and the tip broke off after cutting the first hole. I was able to take it back to Ace Hardware and get it replaced and finish the job. After drilling through the ceramic, I had to put the steel cutting bit back in and finish drilling through the floor of the bus.

My next task to tackle is getting the potable water tank hung under the bus and completing all the plumbing throughout the bus.