I encourage you to begin this post by watching the following video. Be alert to the symbolism, the significant words and details, for there is a parable contained here of that which is coming to America. (For those who discern the meaning of numbers, note the length of the video.)

Locusts have seemingly sprung up suddenly from the earth in the town of Herald California. The word herald means to “signal the imminence of,” “shout or proclaim.”

Yahweh is heralding a message of imminent judgment upon the nation of America. A great stripping of wealth, prosperity, peace, and ease is coming. Yahweh has often used the imagery of locusts to signify His judgment upon a people or nation.

Psalms 105:34-35
He spoke, and locusts came, and young locusts, even without number, and ate up all vegetation in their land, and ate up the fruit of their ground.

Joel 1:4-12
What the gnawing locust has left, the swarming locust has eaten; And what the swarming locust has left, the creeping locust has eaten; And what the creeping locust has left, the stripping locust has eaten. Awake, drunkards, and weep; And wail, all you wine drinkers, on account of the sweet wine that is cut off from your mouth. For a nation has invaded my land, mighty and without number; Its teeth are the teeth of a lion, and it has the fangs of a lioness. It has made my vine a waste and my fig tree splinters. It has stripped them bare and cast them away; Their branches have become white. Wail like a virgin girded with sackcloth for the bridegroom of her youth. The grain offering and the drink offering are cut off from the house of Yahweh. The priests mourn, the ministers of Yahweh. The field is ruined, the land mourns; For the grain is ruined, the new wine dries up, fresh oil fails. Be ashamed, O farmers, wail, O vinedressers, for the wheat and the barley; because the harvest of the field is destroyed. The vine dries up and the fig tree fails; The pomegranate, the palm also, and the apple tree, all the trees of the field dry up. Indeed, rejoicing dries up from the sons of men.

As the woman in the video above has experienced, Yahweh is sending a destroyer to the land of America. America has been experiencing the systematic stripping of her wealth for years. The middle class of America, once the pride and envy of the world, has had their fortunes eaten away with great rapidity. This past week an article on The Washington Post website reported “the median net worth of families plunged by 39 percent in just three years, from $126,400 in 2007 to $77,300 in 2010.” This information was provided by the Federal Reserve.

The article actually is far more optimistic that is warranted. With Europe’s financial system heading into insolvency, and the American government incurring trillions of dollars of additional debt annually, there can be no recovery from the downward spiral. Things will only accelerate in coming days.

All eyes are on the Eurozone at this hour. Spain this past week had to borrow 125 billion dollars from the European Central Bank to keep her banks from collapsing. Greece is voting this week-end on whether to remain in the Eurozone and abide under harsh austerity measures, or to separate and try to recover on her own. Either way the population votes, their efforts will prove vain. We are seeing played out before us the fulfillment of the message inherent in the Costa Concordia disaster. 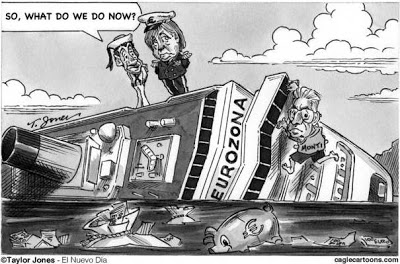 France, Germany and Italy Going Down with the Ship

As the Eurozone (and America) take on more debt, the entire ship sinks further into the abyss. An hour will soon arrive when the entire ship of state rolls over, throwing everything, and everyone, into chaos.

This past week as I have been working on revamping the Heart4God website, I have reviewed many earlier writings. Last August, soon after I was released from jail, I posted a series titled Prison, Praise and Promotion. In part 4 of that series I shared that a brother in Christ had been anticipating my release because World Challenge had been posting a series of David Wilkerson’s devotions that week that were focused on the life of Joseph and the message that Yahweh was raising up a “Joseph company” at this very time. Following is an excerpt from David Wilkerson’s writing.

Let me show you the Joseph Company—a body of last-day believers wholly given to the Lord. They commune with God daily and are led by the Spirit in every detail of their lives. At this moment they are coming out of great trials to enter a place of revelation, wisdom and fruitfulness. God is working in them, giving them his truth and knowledge, and very soon he is going to call upon them as he did Joseph!…


God has always worked far in advance of every spiritual famine in his church. In every generation he has moved ahead to prepare a way out for his people!…


God sent Joseph ahead to Egypt! For twenty years God worked on this man—isolating him, trying him, preparing him for a place of authority—because Joseph was to become the life-saver of God’s chosen. He kept Joseph from the limelight in order that he might be ready for a coming day of chaos and death!
[End Excerpt]

The themes of chaos, famine, and death are very prevalent in the news and in the signs being given at this hour. An hour of great tribulation is coming to the earth, and it is imminent. Yahweh is heralding its coming that His people might make themselves ready.

The very same day (August 11, 2011) that I posted the blog containing David Wilkerson’s devotions on the Joseph Company, the entry for the Streams in the Desert devotional contained the following words:

“Although the fig tree shall not blossom, neither shall fruit be in the vines; the labour of the olive shall fail, and the fields shall yield no meat; the flock shall be cut off from the fold, and there shall be no herd in the stalls: yet I will rejoice in the Lord, I will joy in the God of my salvation” (Hab. 3:17, 18).


Observe, I entreat you, how calamitous a circumstance is here supposed, and how heroic a faith is expressed. It is really as if he said, “Though I should be reduced to so great extremity as not to know where to find my necessary food, though I should look around about me on an empty house and a desolate field, and see the marks of the Divine scourge where I had once seen the fruits of God’s bounty, yet I will rejoice in the Lord.”


Methinks these words are worthy of being written as with a diamond on a rock forever. Oh, that by Divine grace they might be deeply engraven on each of our hearts! Concise as the form of speaking in the text is, it evidently implies or expresses the following particulars: That in the day of his distress he would fly to God; that he would maintain a holy composure of spirit under this dark dispensation, nay, that in the midst of all he would indulge in a sacred joy in God, and a cheerful expectation from Him. Heroic confidence! Illustrious faith! Unconquerable love!–Doddridge.
[End Excerpt]

The words above from the prophet Habakkuk describe what is coming to America. The abundance of the land will be stripped. It will come as suddenly as a plague of locusts upon the land. America’s prosperity will be only a thing of memory.

As I have considered the experiences of my life recently I see a pattern being played out that parallels the life of Joseph in Egypt. The steps of a man are ordered by Yahweh. It was He who determined that I should experience many things that are parallel to the son of Jacob who bore the same name. It is an improbably thing that such parallels should merely be coincidence. Having been released from jail last year, I now find myself being led of the Spirit to store up grain, both natural and spiritual. There is coming to the land a natural and a spiritual famine.

Amos 8:11-12
“Behold, days are coming,” declares Yahweh God, “When I will send a famine on the land, not a famine for bread or a thirst for water, but rather for hearing the words of Yahweh. People will stagger from sea to sea and from the north even to the east; They will go to and fro to seek the word of Yahweh…”

I was greatly encouraged in reading over the article posted last August. The following lines in particular stood out to me.

At this moment they are coming out of great trials to enter a place of revelation, wisdom and fruitfulness. God is working in them, giving them his truth and knowledge, and very soon he is going to call upon them as he did Joseph!

Yes, during a time of chaos, death and famine in the natural realm the Joseph company will enter into “fruitful” days of ministry. People who had no hunger for the truths of God will suddenly find themselves staggering around desperately seeking that spiritual grain from heaven. “Very soon,” Yahweh will call upon those who have been being prepared through many trials, temptations, and difficulties.

People of God, I am confident that the hour of promotion for the Joseph company is near. This means that a time of famine, and worldwide disaster is also very near. The signs are everywhere to be observed. Daily the news reports of nations and corporate entities instituting “emergency” procedures to handle the storms they see building on the horizon. A sampling of recent posts includes the following headlines.

The party is soon to come to a sudden end. I cannot say how soon, but I suspect we still have some months yet as things continue to spiral downward to their inevitable conclusion. Yahweh will use calamitous days to purify a people for His praise. The image of the Costa Concordia foundering, a ship larger than the HMS Titanic, is an apt image of the present hour. 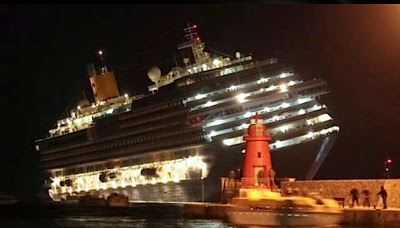 Soon the nations will founder. 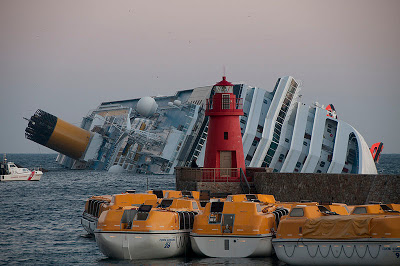 Let us walk wisely, for the days are evil.