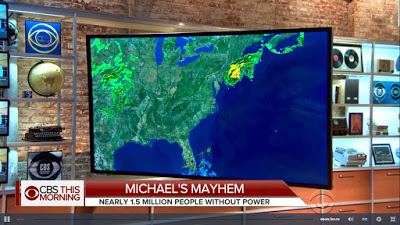 Hurricane Michael. Its story can be told now. The hurricane struck two days ago at about noon. October 10th, 2018 was the day of its impact. Moving forward at approximately 16 mph it did not spend much time over any area. It didn’t need to.

Hurricane Michael exceeded expectations. In the brief period of recorded history only 3 hurricanes had hit the Florida panhandle with winds of a Category 3. Hurricane Michael was 1 mph below a Category 5, being the strongest Category 4 possible with continual wind speeds of 155 mph. It was the strongest hurricane to hit the Florida panhandle and when it made its way to Georgia it carried with it 115 mph wind gusts to the city of Donalsonville.

A couple of facts about the storm were reported first by a sister named Ariane. Michael was the 13th  named storm of 2018 for the Atlantic hurricane season. It was the 7th named hurricane of the season and the 2nd major hurricane. The numbers are significant. 13 is the number of rebellion in the Bible. The first occurrence of the number is as follows.

Genesis 14:3-4
All these joined together in the Valley of Siddim (that is, the Salt Sea). Twelve years they served Chedorlaomer, and in the thirteenth year they rebelled.

The number 7 is symbolic of divine completion. The first chapter of Genesis is speaking of the 7 days of creation. The last book of the Bible speaks of the 7 churches of Asia Minor and the 7 spirits of God.

Revelation 4:5
Seven lamps of fire were burning before the throne, which are the seven Spirits of God.

This could be a symbol of the archangel Michael and his coming battle with Satan and his angels. Satan is the author of rebellion in the Bible and Michael represents the completion and fulness of God. The name Michael literally means “who is like God.” Like Michael, the hurricane came in a hurry and did not waste time with Satan.

In case some are concerned for my inconvenience by the passing hurricane, I lost power for the final time at 8:30 p.m. on Wednesday the 10th. My power was back on by 3:00 p.m. Thursday. It was off less than a day. Also, I no longer have Internet access at my home (this is a personal decision). I go to the local coffee shop to connect, which is where I am at now. The coffee shop is open. It has power and Internet. I come in Monday – Friday, which is the days they are open, and I go to the Starbucks in Perry on weekends, and sometimes to the Panera in Warner Robins. Its about 20 miles to Starbucks, 30 miles to Panera. I usually spend the morning at the coffee shop and spend the rest of the time around the house doing work.

We have lots of tree branches down at our house. George is pretty good at cutting up the branches and burning them. He started work on it yesterday and will have several days to go.

All around there are pecan trees with broken branches and some are uprooted and fallen over. There are lots of pecan trees around. I have seen lots of power and line crews out. Many people in this area are still without power. George and I got the easy part this time. It also cooled off delightfully. Before the storm we were running a constant 10 degrees above normal. Last night it really cooled off, down in the 50s. It was a minimum of 72 degrees at night before this. I opened the windows on my bus and left them open today with the AC off for the first time.

Reading about Panama City, Florida on the Internet, there will be places down there without homes and power for months. It was totally devastated in places. It is like a very large tornado had gone through. Some people are comparing it to a bomb going off.

I will be starting another book with my next post. The next book will be The Remnant Bride.