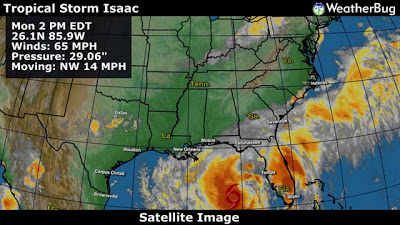 People frequently write to me to share links to news articles. Quite a few have sent me information on Tropical Storm Isaac, which is forecast to become Hurricane Isaac in the next day or two. Many are looking for the spiritual significance of this storm. It is being reported that Isaac should make landfall on the 7th anniversary of Hurricane Katrina striking New Orleans, possibly near the same location.

As I have considered the “coincidence” of these events I was led to reflect on the message contained in Hurricane Katrina. In the presentation titled Signs of Judgment I shared that Hurricane Katrina was sent by God as a judgment against flagrant moral debauchery. Katrina struck New Orleans just a few days before the 34th annual Southern Decadence event was scheduled to take place. Southern Decadence is a week long event that is promoted by the Mayor and City Council of New Orleans, and it is self-described as “a gayer Mardi Gras.”

“Southern Decadence” has a history of filling the French Quarter section of the city with drunken homosexuals engaging in sex acts in the public streets and bars. Last year, a local pastor sent video footage of sex acts being performed in front of police to the mayor, city council, and the media. City officials simply ignored the footage and continued to welcome and praise the weeklong celebration as being an “exciting event.” However, Hurricane Katrina has put an end to the annual celebration of sin.
[Source: http://www.repentamerica.com/pr_hurricanekatrina.html]

It is true that Hurricane Katrina prevented Southern Decadence from being held in New Orleans in 2005, but it was back and in full swing the following year. I checked to see when the event was scheduled to be held this year and found that it is slated to begin on Wednesday, August 29th, the 7th anniversary of Hurricane Katrina striking the city, and the same day that “Hurricane” Isaac is forecast to make landfall impacting New Orleans.

The name Katrina bore an obvious message in 2005. The name Katrina is derived from the Greek katharos meaning “pure.” Katrina also made final landfall at the mouth of the Pearl River. Pearls throughout the Scriptures represent that which is pure and undefiled. The New Jerusalem that comes down out of heaven is described as having 12 gates each made of pearl. This is the origin of the expression “the pearly gates.”

Revelation 21:21, 27
And the twelve gates were twelve pearls; each one of the gates was a single pearl… and nothing unclean, and no one who practices abomination and lying, shall ever come into it, but only those whose names are written in the Lamb’s book of life.

Note that the gates of pearl serve as the demarcation between that which is holy and that which is unholy. We are specifically told that “no one who practices abomination… shall ever come into” the city. Yahweh has described homosexuality as an abomination.

Leviticus 18:22
“You shall not lie with a male as one lies with a female; it is an abomination.”

That the revelers coming to New Orleans intuitively recognize the gross immorality of their actions is revealed in the name of the debauched homosexual festival held there. It is named “Southern Decadence.” The word decadent means “morally depraved, impure.” The word shares a common root with the word “decay,” which is used to describe a fall from a pristine state into one of corruption. Despite the hue and cry of the homosexual community that their sodomite acts are to be respected as natural and decent, when they gather together among their own in New Orleans they boast of the indecency of their unrestrained sexual escapades.

The official website for the Southern Decadence events in New Orleans contains the following words on their history page.

By noon traffic will be closed to vehicles at Royal Street at Esplanade and Barracks at Chartres Street since Royal Street will be overflowing with marchers mostly costumed in drag, scare drag and traditional drag, and any other kind of rig they can conjure up from their imaginations. And don’t forget all those gourgeous (sic) men and women, most scantily clad. You will see the playful, the whimsical, the pretty, the ugly, the satirical, the witty, and the obscene. But whatever you see, it will always be totally decadent.
[Source: http://www.southerndecadence.com/history.htm]

When a people give themselves over to moral depravity to such an extent that their consciences are seared, where they have no shame, nor inhibition, choosing rather to boast of their unrighteousness, they are inviting the judgment of Yahweh. 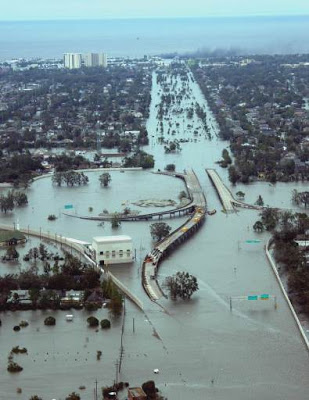 There was no repentance in New Orleans to be found among the city leadership after the devastation wrought by Hurricane Katrina. Mayor Nagin immediately began declaring that although Southern Decadence had been canceled, the city was determined to be back open for all revelers to arrive to celebrate Mardi Gras in the Spring. Four weeks later, just as the mayor announced that citizens could begin to return Hurricane Rita struck and flooded the city for the second time. The name Rita means “pearl.” God was plainly declaring that He will judge unrighteousness and that He demands purity from the nations.

Seeing that the names of these hurricanes that struck New Orleans in 2005 bore such significant meaning, what could the name Isaac portend? The name Isaac means laughter, and it is derived from the Hebrew word “tsechoq.”

Strong’s Concordance of Hebrew words provides the following definition of this word.

laughter (in pleasure or derision)

When I first learned the name of this storm was Isaac, the word “derision” immediately came to mind. This Hebrew word occurs in only two places in the Bible. The following passage is speaking of Yahweh’s judgment upon Judah and Jerusalem for their flagrant immorality. Yahweh states that those who have given themselves to sin with an unrepentant heart will “be laughed at and held in derision (teschoq).”

Ezekiel 23:28-33
Thus says Yahweh God…, “the nakedness of your harlotries will be uncovered, both your lewdness and your harlotries. These things will be done to you because you have played the harlot with the nations, because you have defiled yourself with their idols. You have walked in the way of your sister (Samaria); therefore I will give her cup into your hand.’ Thus says Yahweh God, ‘You will drink your sister’s cup, which is deep and wide. You will be laughed at and held in derision; It contains much. You will be filled with drunkenness and sorrow, the cup of horror and desolation…”

The city of New Orleans is unrepentant in its unrighteousness. Although it has been twice struck by hurricanes in recent times, it has not altered its hedonistic pursuit of every form of impurity and unrighteousness.

Southern Decadence started forty-one years ago as a simple going-away party. As a top gay Labor Day Weekend destination, it has evolved into one of our world’s major annual events.  One of the largest annual celebrations and festivals in New Orleans, it has become known as the “Gay Mardi Gras.”  People begin to arrive on the Wednesday before Labor Day, and generally don’t even think about stopping or going home until the following Tuesday.  With over 120,000 gay, lesbian, bisexual and transgender participants, and an economic impact estimated to be in excess of $125 million, the city has recognized the festival’s importance with an Official Proclamation to welcome the event.
[Source: http://www.southerndecadence.net/]

Isaac is set to rain on this parade of immorality. Following is an image of a weather forecast for the city posted today. 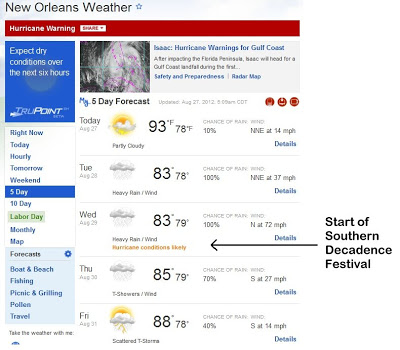 Though the leaders of the city, and of the nation, promote homosexuality as if it were virtuous and beyond reproach, God has declared that it is an abomination. Many are giving into the constant drone of the media and pressure from those who promote sodomy and other perversions. The weight of men’s opinions is less than nothing when compared to the thoughts and judgments of mankind’s Creator.

Isaiah 40:15-17
Behold, the nations are like a drop from a bucket, and are regarded as a speck of dust on the scales; Behold, He lifts up the islands like fine dust. Even Lebanon is not enough to burn,
Nor its beasts enough for a burnt offering. All the nations are as nothing before Him, they are regarded by Him as less than nothing and meaningless.

Though the pride of man boasts great things, and puffs itself up in rebellion against God, Yahweh holds the unrighteous and prideful in derision. None can stay His hand.