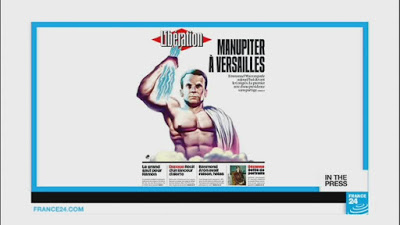 A few weeks ago a brother in Christ sent me a link to the new French President Emmanuel Macron giving a speech to the Congress at the Versailles where he said he would like to be thought of as a new Jupiter, god of the gods. Curiously the name Emmanuel means “God is with us,” while the name Macron is from the ancient Greek. The ancient Greeks considered Zeus to be the equivalent of the Roman Jupiter.

Some other curiosities about Emmanuel Macron is that he got 66.06% of the vote. He was a partner at a Rothschild bank, and he had a cameraman take his picture at the base of the pyramid at the Louvre while he was thanking the people who had elected him. 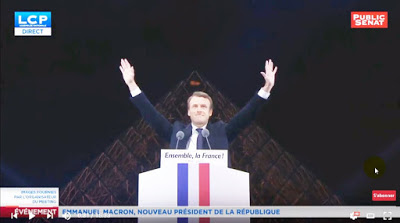 To say that he is tied in to the New World Order is a small thing. Another thing is that he is married to a woman who is 24 years older than him, and she is formerly married to another man. Macron and she have no children, but she does have three children by another man.

I didn’t intend to post on this man, though he does have plenty of symbolism. I was looking into the September 23 heavenly sign that is supposed to be the fulfillment of Revelation 12 when I ran into Jupiter again.

Revelation 12
Now a great sign appeared in heaven: a woman clothed with the sun, with the moon under her feet, and on her head a garland of twelve stars. Then being with child, she cried out in labor and in pain to give birth. And another sign appeared in heaven: behold, a great, fiery red dragon having seven heads and ten horns, and seven diadems on his heads. His tail drew a third of the stars of heaven and threw them to the earth. And the dragon stood before the woman who was ready to give birth, to devour her child as soon as it was born. She bore a manchild who was to rule all nations with a rod of iron. And her child was caught up to God and His throne. Then the woman fled into the wilderness, where she has a place prepared by God, that they should feed her there one thousand two hundred and sixty days. And war broke out in heaven: Michael and his angels fought with the dragon; and the dragon and his angels fought, but they did not prevail, nor was a place found for them in heaven any longer. So the great dragon was cast out, that serpent of old, called the Devil and Satan, who deceives the whole world; he was cast to the earth, and his angels were cast out with him. Then I heard a loud voice saying in heaven, “Now salvation, and strength, and the kingdom of our God, and the power of His Christ have come, for the accuser of our brethren, who accused them before our God day and night, has been cast down. And they overcame him by the blood of the Lamb and by the word of their testimony, and they did not love their lives to the death. Therefore rejoice, O heavens, and you who dwell in them! Woe to the inhabitants of the earth and the sea! For the devil has come down to you, having great wrath, because he knows that he has a short time.” Now when the dragon saw that he had been cast to the earth, he persecuted the woman who gave birth to the male child. But the woman was given two wings of a great eagle, that she might fly into the wilderness to her place, where she is nourished for a time and times and half a time, from the presence of the serpent. So the serpent spewed water out of his mouth like a flood after the woman, that he might cause her to be carried away by the flood. But the earth helped the woman, and the earth opened its mouth and swallowed up the flood which the dragon had spewed out of his mouth. And the dragon was enraged with the woman, and he went to make war with the rest of her offspring, who keep the commandments of God and have the testimony of Yahshua Christ.

The twelve stars all come into alignment in a little over a month. The planet Jupiter spends nine months in the womb of the woman, and then comes out, though some have mentioned it earlier on their sky charts, being as early as September 9th. When I heard Emmanuel Macron speaking about Jupiter it reminded me of this Jupiter sign in the heavens.

Though those who put it to mean a pre-trib rapture are wrong. The church is not going to experience a pre-trib rapture. So many of the people of God are against the suffering of the church. It will truly be a horrible time for them. Consider the meaning of the words, “And they overcame him by the blood of the Lamb and by the word of their testimony, and they did not love their lives to the death.”
Consider also the usage of the word “persecuted,” and “make war.” What is described is not a catching away of the whole church unto God. It is a catching away of a manchild. A brilliant, holy remnant who have followed Christ down the paths He has led them. A manchild who have known suffering and have overcome it. Is it not a glorious thing that is testified of in saying that the manchild will be caught up to the throne of God? 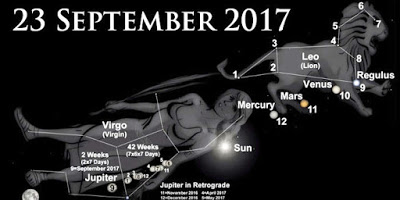 When you hear men begin to teach on this sign as proof of a rapture of the church, don’t be fooled. Those who are dreaming of being caught up without suffering are fooling themselves. God might as well just apply willy nilly the honor given to His sons (male and female). Don’t forget the book of Revelation begins with the letters to the seven churches of Asia. Only two of the churches do not have anything negative said about them. The church that sounds most like the church today is the last one, the Laodicean church.

Revelation 3:14-22
“And to the angel of the church of the Laodiceans write, ‘These things says the Amen, the Faithful and True Witness, the Beginning of the creation of God: I know your works, that you are neither cold nor hot. I could wish you were cold or hot. So then, because you are lukewarm, and neither cold nor hot, I will vomit you out of My mouth. Because you say, ‘I am rich, have become wealthy, and have need of nothing’ – and do not know that you are wretched, miserable, poor, blind, and naked – I counsel you to buy from Me gold refined in the fire, that you may be rich; and white garments, that you may be clothed, that the shame of your nakedness may not be revealed; and anoint your eyes with eye salve, that you may see. As many as I love, I rebuke and chasten. Therefore be zealous and repent. Behold, I stand at the door and knock. If anyone hears My voice and opens the door, I will come in to him and dine with him, and he with Me. To him who overcomes I will grant to sit with Me on My throne, as I also overcame and sat down with My Father on His throne. He who has an ear, let him hear what the Spirit says to the churches.”‘”

“To him who overcomes…” Not everyone. This is the one who is granted to sit on the throne with Christ.

Consider the vain words of Emmanuel Marchon. They do have a pallid sound to them. The same is true of what most are pulling from the pages of Revelation 12 and its signs. Do not listen to the false drivel. Follow Christ. Make Him the One who is planning your way. You will never go wrong.