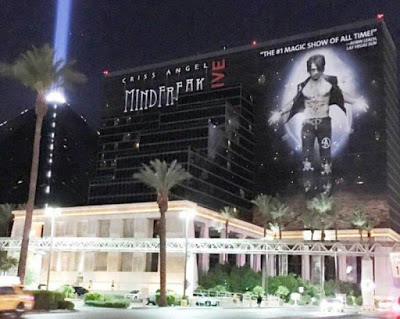 Have you ever taken a look at Criss Angel, MindFreak? He describes his show as dark entertainment. He is renowned for certain things, such as levitating. He does many feats of magic, much of which appears demonic. He employs Voodoo in his acts. Criss Angel is enabled to do his magic works by Satan and yet he wears a cross ring and makes mention of Christ. He wears pants, shirts, and hats that portray human skulls. He is a bizarre person and yet the name of his show, MindFreak, describes perfectly what went on during the shooting of October 1st.

If you do not recognize the building this sign is on, it is one of the two ziggurats that make up the hotel at the Luxor. The pyramid is right next door. All of the property looks across the grounds that the Route 91 Harvest country music festival was at.

To bring this show closer to home, Criss changed his last name to “Angel” which is what Satan is. If you ever watch one of his shows, which I don’t recommend, you will see unmistakably that the angel in his name is not a holy angel, it is a fallen angel. I should not even need to say this, but there are people who will read my site who always think of holy angels when they see the word “Angel.” This is not what Criss had in mind, however. Looking at the advertisements for magicians in times past reveals what was really on his mind. 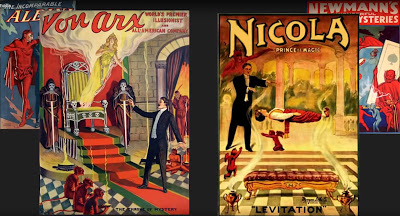 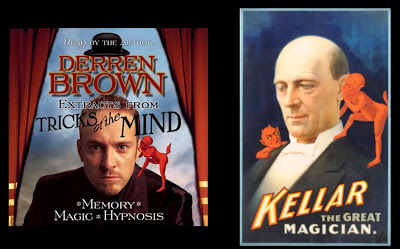 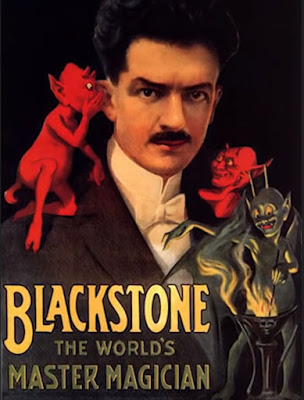 Magicians in times past have not been shy about displaying their associations. Criss Angel is not shy about it either with his pentagrams, skulls, and bizarre looks. 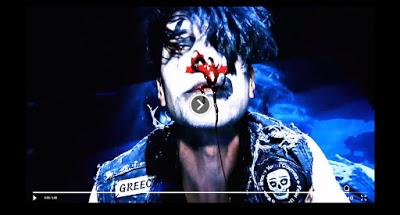 To have the MindFreak across the street from the Route 91 Harvest Festival is terribly incongruous. I will let you see an even greater incongruity. So many of the people in this nation have been talking about what a great President Donald Trump is. Did you know Donald’s father’s name was Christ and his mother’s name was Mary? His father was Frederick Christ Trump Sr. and his mother was Mary Anne MacLeod Trump. I have already made the case for Donald being a womanizer, a child molester, and an incestuous father.

Has anyone who reads this blog ever been to a home of a billionaire? Do you know how the billionaires get their money? They are granted it by Satan. Satan does not give the world’s riches to anyone. They have to prove their worthiness to receive it.

Matthew 4:8-10
Again, the devil took Him to a very high mountain, and showed Him all the kingdoms of the world, and their glory; and he said to Him, “All these things will I give You, if You fall down and worship me.” Then Yahshua said to him, “Begone, Satan! For it is written, ‘You shall worship the Lord your God, and serve Him only.'”

Satan’s offer is not rejected by everybody. There are families that receive billions of dollars, and others receive fame for a short period. These dark ones do worship Satan and perform all manner of dark deeds.

In the last post I shared that Donald Trump is as much a part of the false flag events carried out by the global corporatists as George Bush was a part of 9-11. By this I don’t mean to say he planned it, but he was aware of what was going on. If one looks back at the stops he made while running for President they will see Charlotte, North Carolina on the itinerary. When he went to Charlotte he had plans to visit the Bank of America’s tower. He did do this, but the true reason for his visit was undisclosed. Following is a picture of the murals in the building. 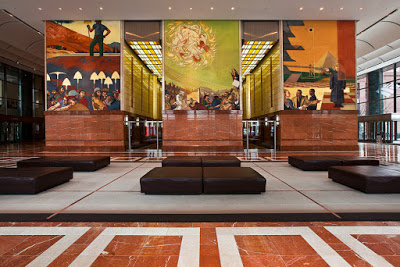 The third mural is the one I would like you to notice right now. 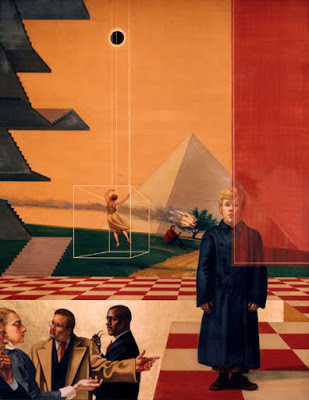 This mural is named “Planning/Knowledge” and was created by Benjamin Long. It has a depiction of a Knights Templar boy. Note that his feet are at 90 degrees and the checker board he is standing on is red and white. These are the primary colors of a Knights Templar for they wore white robes and had red crosses. 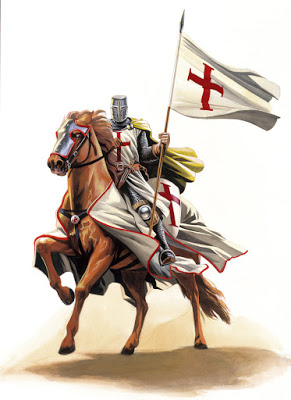 The Knights Templar is the highest degree you can attain to in York Rite Freemasonry. Some have suggested that this Knights Templar boy is Donald Trump. Note the coat that the boy is wearing. It has two sets of buttons, one on each side of it. It resembles a Knights Templar jacket. 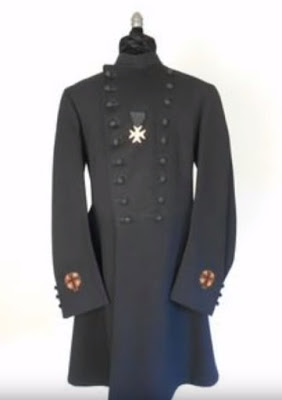 Seeing that the boy is standing with his feet 90 degrees apart, a perfect stance for a Freemason, and the checkerboard he is on is red and white, it makes perfect sense that he is wearing something that belongs to a Knights Templar. There is another explanation for it, however, that is it is supposed to be a resemblance to Donald Trump. From 8th grade until he graduated from high school Donald Trump was in military school. 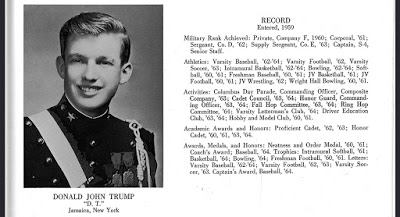 Donald Trump made the rank of Captain during his senior year in high school. It is well known that the Illuminati has their plans made out for many years. It is undoubted by me that Donald Trump was designated to be President when he was much younger. Donald Trump was born on a day that there was a lunar eclipse, and there is either a solar or lunar eclipse on the mural. The cube is sacred to the Freemason and a woman is inside a cube. The pyramid, as we know, is also sacred to the Freemason. Just look at the back of a one dollar bill. Donald Trump often wears a red tie with a white shirt. 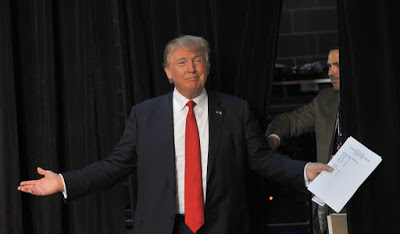 His home in New York is filled with Greek or Roman gods, and it is gilded with gold. Yet it is his name that is the most prophetic. The English Gematria for the name Donald J. Trump is 888. This is the same as the Iesous in Greek (the name of Jesus).

We see then that the man whose father has the name of Christ, whose mother has the name of Mary, has the Gematria value of the name of Jesus in Greek (888). One may not think this is that important to Donald Trump, but he had 88 campaign locations. He said he spent 88 million of his own money. Remember he was 70 years, 7 months, and 7 days old when he took the oath of office (7-7-7). That is not something he could have planned, but Satan could have.

Gematria value is important to Satan. And lest we forget, the numbers of the zip code of Obama’s campaign office in Chicago, the place from which he came, was 60606. The Illinois Pick Three numbers the day after the election were 666. The name of the armored car he rode in was “The Beast.” He got into office saying he was opposed to gay marriage and then once he was elected he said his thoughts had “evolved” on the matter. He held a gay pride month every year he was in office, and even had the White House illumined in the colors of the rainbow, representing homosexual pride. 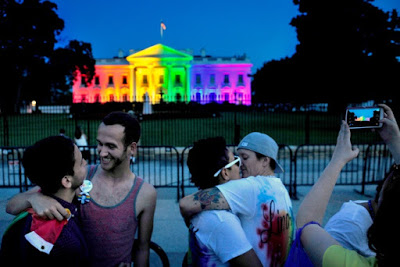 Don’t let us think that everything is ok in this world. It is not. Remember well the words of God.

II Timothy 3:1
But realize this, that in the last days difficult times will come. For men will be lovers of self, lovers of money, boastful, arrogant, revilers, disobedient to parents, ungrateful, unholy, unloving, irreconcilable, malicious gossips, without self-control, brutal, haters of good, treacherous, reckless, conceited, lovers of pleasure rather than lovers of God; holding to a form of godliness, although they have denied its power; and avoid such men as these.

Does not Donald Trump hold to a form of godliness, yet he does not know Yahweh? Let us look at one more sign that this was a planned event. The music was from the Route 91 Harvest Festival. There is only one chapter in the Bible that is 91.

Psalm 91
He who dwells in the shelter of the Most High Will abide in the shadow of the Almighty. I will say to Yahweh, “My refuge and my fortress, My God, in whom I trust!” For it is He who delivers you from the snare of the trapper, and from the deadly pestilence. He will cover you with His pinions, and under His wings you may seek refuge; His faithfulness is a shield and bulwark. You will not be afraid of the terror by night, or of the arrow that flies by day; Of the pestilence that stalks in darkness, or of the destruction that lays waste at noon. A thousand may fall at your side, and ten thousand at your right hand; But it shall not approach you. You will only look on with your eyes, and see the recompense of the wicked. For you have made Yahweh, my refuge, even the Most High, your dwelling place. No evil will befall you, nor will any plague come near your tent. For He will give His angels charge concerning you, to guard you in all your ways. They will bear you up in their hands, lest you strike your foot against a stone. You will tread upon the lion and cobra, the young lion and the serpent you will trample down. “Because he has loved Me, therefore I will deliver him; I will set him securely on high, because he has known My name. He will call upon Me, and I will answer him; I will be with him in trouble; I will rescue him, and honor him. With a long life I will satisfy him, and let him behold My salvation.”

Was this Psalm fulfilled that night? Perhaps it was for some Christians. This is a Psalm of safety and protection. It says “No evil will befall you… For He will give His angels charge concerning you, to guard you in all your ways.” It is not a promise to keep you from harm if you are frolicking with the Devil. Maybe that is why so many were hurt. Sitting or standing in an outdoor forum that is directly across from a huge model of the Great Pyramid of Giza, an obelisk, and the sphinx; next to twin ziggurats that have the image of Criss Angel and the word MindFreak emblazoned on them. If there were a place that had a potential for evil, this was it.

I’m sorry, I took another whole blog to introduce this. There is so much that serves as background in this Las Vegas event. My next post will present the kabbalistic ritual that proves this was a dark and lying mass.