Laying Down the Law – Preamble 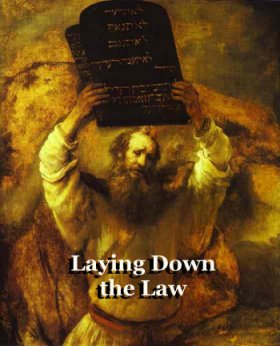 Practically since the time I published the original book bearing the name Laying Down the Law, it has been upon my heart to add to it. That was in 2002. I have participated in many conversations and lengthy correspondences on the subject of Yahweh’s intended purpose and role for the Law since then. I have encountered a vast array of arguments whose intent was to justify the continuance of the Law’s authority and rule over the life of the believer in Jesus Christ, Yahshua the Messiah.

I have tested every argument, and sought the counsel of Yahweh, inviting Him often and with fervor to guide me into all truth. He has been very willing to answer my sincere and trusting pleas. As James (Jacob) wrote to the body of Christ:

James 1:5
If any of you lacks wisdom, let him ask of God, who gives to all men generously and without reproach, and it will be given to him.

There have been so many arguments that would turn the intended meaning of the apostles instructions concerning the Law on their head, and so much more revelation the Father has graciously opened to me on this topic, that I find it expedient to not merely add to the former writing, but to do a thorough re-write. None of the conclusions set forth previously have been changed. Nevertheless, I believe it would be of benefit to address this subject with a new approach, laying a solid foundation and building upon it.

The Difficulty of This Work

There are a number of things that make the writing of this book a difficult task. Foremost in my mind are the attitudes, words, and emotions of those who staunchly advocate the continuance of the Law’s authority over the saints. I have found through much bitter experience that the discussion of this topic elicits from many a vitriolic response. I have had brothers and sisters revile me. Even some who are normally meek and temperate have become very intemperate in their remarks as I have invited them to look to the Scriptures and discourse with me on this subject. Much heat and frequent violations of the love of the brethren have come forth from those I have invited to patiently examine this matter with me.

If one properly understands the Scripture’s testimony, they will know that such a response has a long and tragic history. One can find the enmity that exists between those whose focus is upon works of the flesh, and those who approach Yahweh in faith, as far back as the Chapter four of the book of Genesis. Cain brought to Yahweh a magnificent offering of the fruit of the ground. Man’s flesh was formed of the dust of the earth, and Cain’s offering represented the very best that the flesh can produce. Yahweh had no regard to this offering.

Cain’s brother Abel brought forth of the lambs of the flock. He presented an offering of faith looking to that day when Yahweh would send His Son as a sacrificial lamb to atone for all the sins of mankind. Yahweh had regard to the faith of Abel, and Cain envied his brother’s favor and slew him.

The persecution of the sons of faith by the sons of works found expression once more in the offspring of Abraham. His first son is a type and shadow of Yahweh’s first people (Israel). His second son, Isaac, is a type of those who are the seed of Christ and a people of faith. Paul expounds upon this in his letter to the body of Christ in Galatia.

Galatians 4:21-30
Tell me, you who want to be under law, do you not listen to the law? For it is written that Abraham had two sons, one by the bondwoman and one by the free woman. But the son by the bondwoman was born according to the flesh, and the son by the free woman through the promise. This is allegorically speaking: for these women are two covenants, one proceeding from Mount Sinai bearing children who are to be slaves; she is Hagar. Now this Hagar is Mount Sinai in Arabia, and corresponds to the present Jerusalem, for she is in slavery with her children. But the Jerusalem above is free; she is our mother. For it is written, “Rejoice, barren woman who does not bear; Break forth and shout, you who are not in labor; For more are the children of the desolate than of the one who has a husband.” And you brethren, like Isaac, are children of promise. But as at that time he who was born according to the flesh persecuted him who was born according to the Spirit, so it is now also.

Observe carefully what Paul states here. Hagar is compared to Mount Sinai, the place where Moses received the Law from Yahweh. Her son represents those who are under the Law. Hagar is Jerusalem. She is Judaism with its focus upon regulations and ordinances and commands that define the person who is righteous and the person who is unrighteous. Ishmael was born before Isaac, the son of faith, and he persecuted Isaac. Note the particular form of this persecution.

Genesis 21:8-9
And the child grew and was weaned, and Abraham made a great feast on the day that Isaac was weaned. Now Sarah saw the son of Hagar the Egyptian, whom she had borne to Abraham, mocking.

Ishmael was mocking Isaac. Words are often employed as a form of persecution. It was this event the apostle Paul referred to when he stated that “he who was born according to the flesh persecuted him who was born according to the Spirit.” I have also been the frequent recipient of verbal persecution from my brothers and sisters who have embraced the Law. A barrage of insults and slander have come my way when I have pointed those under the Law to a “more excellent way” (Hebrews 8:6).

The fullest depiction of the enmity between those who are of the Law, and those who are of the Spirit, was revealed when the Jewish leaders crucified the Lord of Glory. I know from experience, and from the testimony of Scripture that in addressing this issue once more there will be those whose passions are inflamed against me and who will decry the message. Indeed, if my focus were upon those who argue for the Law’s continuance, it would be with the greatest difficulty that I could bring myself to pick up this subject once more.

This book is not written for those without the patience to hear a matter, examine it closely, test it against the Scriptures, and invite the Spirit of Christ to guide them into truth. The book has a specific audience in mind.

The word audience literally means hearers. It comes from the same root as the word audible. It is not my desire to wrangle with those whose minds are closed. Such ones may read, but they do not perceive. They may listen, but they do not hear. Many are found among the household of God who are in this condition.

Isaiah 42:19-20
Who is blind but My servant, or so deaf as My messenger whom I send? Who is so blind as he that is at peace with Me, or so blind as the servant of Yahweh? You have seen many things, but you do not observe them; your ears are open, but none hears.

There are legions of those among the body of Christ today who fit the description set down by the apostle Paul.

I Timothy 1:6-7
For some men, straying from these things, have turned aside to fruitless discussion, wanting to be teachers of the Law, even though they do not understand either what they are saying or the matters about which they make confident assertions.

This writing is offered for those who have hearing ears. I will not offer my opinion in this book and ask any to receive it. Everything will be predicated upon Scriptures. I entreat those who are desirous of truth to examine everything. Test the Scriptures. Invite the Holy Spirit to reveal both truth and error.

This is an exceedingly important subject. Many are running in vain. When they stand before Yahweh on the day of judgment and present to Him the fruit of their lives they will find that their offering is despised as was Cain’s. Do not make this tragic error. Receive instruction now. Beware that sin is crouching at the door and it would devour you.

If you will attend with patience to this teaching, I am confident that you will be well rewarded.

He who has ears to hear, let him hear what the Spirit is speaking!