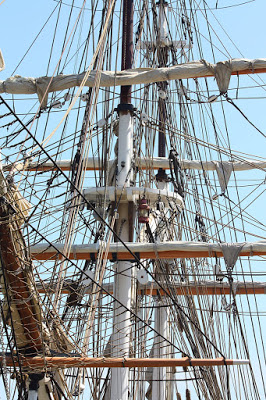 Did you know that the expression “learning the ropes” originates in the maritime industry? Back in the days of sailing ships with their tall masts and immense spread of canvas, there were ropes everywhere aboard ship. The ropes were used to haul up the sails, and to lower and lash them to the spars affixed to the masts. Ropes were used to secure items both on deck and below deck. Being able to properly handle the ropes and tie a variety of knots was a necessary part of a seaman’s skill set. A new deck hand would be required to “learn the ropes” in order to do his job.

Nowadays we use this expression when referring to learning the basics of a new job or mastering the skills for some endeavor. Recently I have been learning the ropes as I have been seeking to master new software and techniques for creating videos of my books and other writings. At times I have felt like a landlubber who hasn’t gotten his sea legs yet. I seem to be tottering around, unsteady on my feet, as I make halting progress. Progress has been forthcoming through perseverance and Yahweh’s grace, but it hasn’t been achieved without significant trial and error. 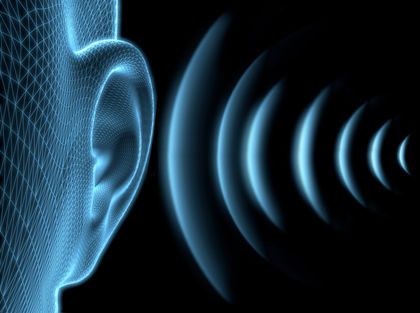 The casual viewer of a video may not realize how much of the sense of professionalism and quality of a video is related to excellent sound. It has been said that people will tolerate poor video as well as the sound is good, but the opposite is not true. Some time back I looked into the details of creating audio books to post on Amazon. One of the requirements that stood out to me is that the threshold of background noise had to be very low. I do not recall the precise decibel limit, but it would almost necessitate a dedicated sound recording room, with sound isolation from external sources, to achieve the levels required.

Since my working and living environment is inside a schoolbus that has been converted to a motorhome, and half the year I rely upon a roof mounted air conditioner for cooling, achieving the level of quiet necessary is difficult. I have done some testing of late, making a number of recordings. I attempted to use two different software programs (Audacity and Reaper) to remove background noise from the recordings. However, the background noise level is so high inside my bus when the air conditioner is running that removing the background noise leaves the voice recording sounding clipped and unnatural, with a sort of metallic tone to it. After several attempts I concluded that I will not be able to obtain good quality audio when the AC is running.

This is not an insurmountable problem, however, for I can do my audio recordings in the early mornings and late evenings (or the middle of the night if I am so inclined) when running the AC is not necessary. Since I live in a rural area, things are generally quiet. I do have to turn off my phone, silence all notifications on my computer, and hope that the dogs will not start barking. I am a morning person. I like getting up early and getting to work. I can be very productive in the mornings when my mind and body are rested, so this appears to be my best solution. During the heat of a Georgia Spring and Summer I normally will not need to turn the air conditioner on until around 9 A.M.. If I begin recording around 5 A.M., this gives me 3-4 hours of recording time, and that is about all the talking I can handle in a day’s time anyway. I can then spend the rest of the day editing the videos and preparing them for posting, as well as attending to my other normal ministry duties such as answering correspondence, creating new writings, and printing newsletters for men in prison. 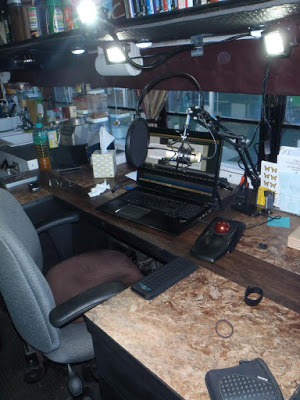 The photo above shows my recording set-up with my three LED recording lights turned on. The topmost light illumines the green screen behind me and the other two lights illumine me. After my first recording session I discovered that my green screen wasn’t filling up the complete background behind me. Rather than getting a larger green screen made, I simply moved it closer to the back of my chair. I also observed that the single light shining on the green screen didn’t do an adequate job of lighting the entire screen evenly during the early morning hours when the sun had not yet risen. I did not have any issues with green screen lighting during daylight hours for my bus has lots of windows. However, recording when it is still dark outside resulted in an unevenly lit green screen. I had to raise the color tolerance to get the green screen to disappear, but raising the color tolerance too high also causes other things to disappear. I noticed that my beard would start to shimmer as if it were sparkling. It was an interesting effect, but not what I wanted for my video recordings.

Fortunately, I had some other LED lights. They did not have cords attached to them, so I had to wire them up. They are 20 watt flood lights, whereas the single light I had been using was a 10 watt LED lamp. So I now have plenty of illumination on the green screen. I set these lights up on the wings of my desk when recording and put them away when I am done.

About 2 years ago I entertained the idea of beginning video recordings and I purchased a Canon Vixia camcorder for the purpose. I was going to do my recordings in my daughter’s music room, but the inconvenience of recording elsewhere ended up being too much for the amount of recordings I intended to do. Now that I have a large desk and can record in my bus, I altered some of my ideas for recording. I wanted to utilize Camtasia’s Studio software which can capture a computer screen as well as a person recorded on a webcam. Camtasia Studio does not support camcorders, so I could not use my Canon Vixia camera.

I thought to try using the built in webcam on my laptop computer, for it is rated as a high definition (HD) camera. Not all HD webcams are created equally, however. The image was not very sharp, and since the webcam was built into the laptop, it necessitated that I keep the laptop computer pointed at a fixed angle so that it would align with the green screen behind me. About this time a brother in the Lord (thank you Bruce) read my previous post on recording video and he informed me of several excellent webcams that were available and even offered to mail his for me to try so that I could make up my mind. He uses the excellent Logitech 920 HD Pro webcam. It has excellent reviews, but alas, I did some research online and discovered that it did not work well with Camtasia.

Another excellent webcam is the Microsoft LifeCam Studio. This normally retails for about $100, but I found one used in excellent shape for $35. It has the added benefit of having a tripod mount so I do not have to affix it to the top of my laptop. If I move my computer while recording it would cause problems for a camera mounted to it. 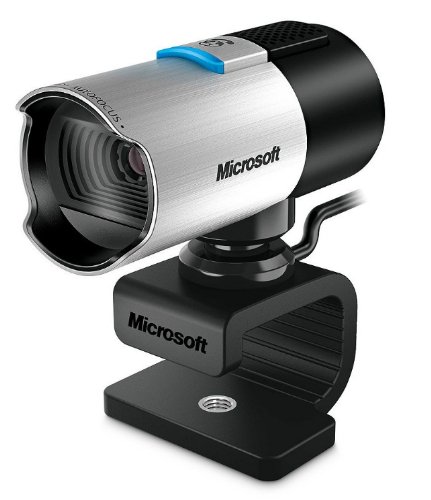 The image quality is markedly better with this Microsoft webcam. 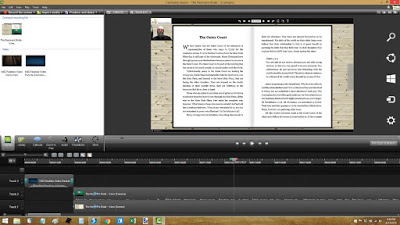 I reported in an earlier blog that I had gotten an excellent deal on an older version of Camtasia Studio. I am always on the lookout for the most cost effective way to get something done. I had version 7.0 of Camtasia Studio, but I did not pay close enough attention to the software features. Camtasia did not begin supporting green screen functionality until the release of version 8.1. Version 8.6 is the current version.

I was very much wanting to begin working with the software Sunday so that I could “learn the ropes.” However, not having green screen capability was preventing me. The upgrade was available for $149.00, half the cost of purchasing the full version. This was still a savings as I had paid less than $100 for Camtasia 7.0. However, I had a number of expenses come up recently, including my bi-annual insurance payment on my bus and car. My finances were depleted, so I prayed and asked the Father for grace in this matter. I told Him I would very much like to make progress on learning this software, but I needed the money to be able to purchase the current version.

Since I no longer needed the Canon Vixia camera, I decided to post it on Ebay and asked the Father for a quick sale. It sold in little more than an hour’s time. I was paid instantly via PayPal and able to purchase the Camtasia software, install it, and begin working with it Sunday. I am pleased with the functionality of the software. The green screen effect is extremely simple to implement. 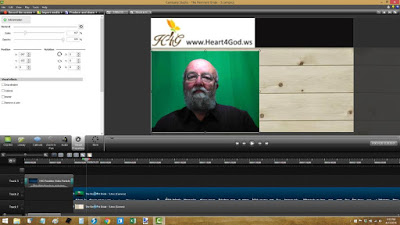 The image above shows the image as captured by the MS LifeCam Studio webcam with the green screen behind me. With a click of the mouse I can make the green disappear. 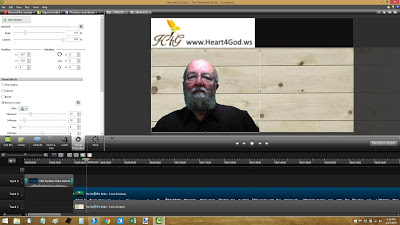 I have uploaded my first video, part one of The Remnant Bride, to YouTube.

I have also uploaded the entire book The Remnant Bride in FlipBook format to the Heart4God website. Please note that this is a large file of about 10 MB. When downloaded it will appear as an “.exe” file. You may receive some warning messages from your Internet browser when downloading, stating that this type of file may be unsafe and contain viruses. However, it is safe to download this file, as it does not contain any malware. The file is also compressed. It would be a 17 MB file uncompressed. Once you click on the downloaded file initially, you may experience a lag as the file unpacks (decompresses). Then the FlipBook will load.

I would be interested to receive your comments on the video and FlipBook. If I can figure out how to do so, I will upload the FlipBook as an HTML file so it can be viewed online without needing to download a large file.