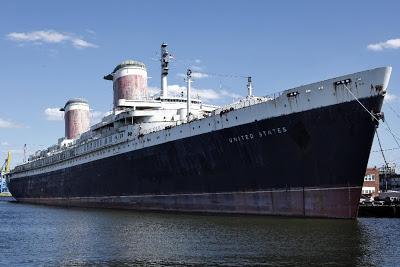 Some days ago a brother in Christ (thank you Darrell) sent me a link to an article that has very obvious prophetic implications. The article focused on the crisis facing the caretakers for the ocean liner pictured above. The SS United States is viewed by many as America’s flagship. This once grand ocean liner was built in 1952 at a princely sum for the period of $78 million dollars. In many ways this ship serves as a type, or symbol, of the nation whose name she bears.

The SS United State’s builders had chosen a hull design that was built for speed. They also utilized more aluminum in the construction of the ship than had been used in any other building construction on land or sea up until that time. By utilizing this lighter weight metal, many tons of weight were removed from the ship, allowing it to ride higher in the water and attain a greater speed. The ship also utilized the most powerful steam turbines to be found in any merchant marine vessel. She had four turbines that produced a combined 240,000 SHP (Shaft Horse Power). This gave the ship the greatest power to weight ratio of any passenger ship before, or since, her construction.

There is much in these details that parallel aspects of America as a nation. America is a superpower. The United States has ridden higher than any other nation on earth. She has used technological innovation to advance far beyond the scope of other nations. Even as America has remained ascendant over the nations since World War II, so too has the Blue Riband trophy remained with the SS United States. No other Atlantic liner has ever broken her crossing record.

The SS United States made the New York to England crossing in 3 days, 12 hours, and 12 minutes. This gave her an average speed of 35.59 knots. This was a phenomenal pace. In miles per hour this would equate to 41 MPH. To push a vessel greater in length than three football fields through water at that speed is a phenomenal achievement. 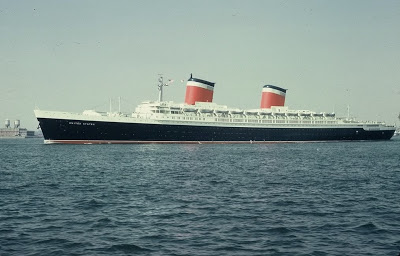 Even as the nation of America is an odd mixture of material opulence and military might, the SS United States offered both luxury, as well as being designed for rapid transformation into a military transport ship.

A Dining Hall on the SS United States

The U.S. government underwrote $50 million of the $78 million cost of construction for this ship, reserving the right to commandeer the ship in a time of war. In its heyday the ship transported the rich and famous. President John F. Kennedy, Elizabeth Taylor, Marilyn Monroe, Salvador Dali, Prince Ranier of Monaco, and many others crossed the Atlantic on this vessel. Yet, its design was such that in a single day it could be converted from its normal passenger capacity of 2,000 to military use to transport 14,000 servicemen at a time.

The United States in the 20th century has been renowned the world over for her prosperity. She has been known as the land of opportunity where a man could change his fortunes quickly, arising from poverty and obscurity to fortune and fame at record speed. America has been viewed as the land where a Horatio Alger story could come true. At the same time, she has become famous for her ability to quickly transform into a military might whose power was awesome to behold. Admiral Yamamoto who led the Japanese assault on Pearl Harbor gave voice to America’s ability to transform herself when he stated, “”I fear all we have done is to awaken a sleeping giant and fill him with a terrible resolve.”

Wikipedia provides the following information on the ship.

By the late 1960s, the market for Transatlantic travel by ship had dwindled. Queen Mary had been retired in 1967 and Queen Elizabeth in 1968. United States was no longer profitable. While United States was at Newport News for annual overhaul in 1969, the shipping line decided to withdraw her from service, docking the ship there. After a few years, the ship was relocated to Norfolk, Virginia. Subsequently, ownership passed between several companies. In 1978, the vessel was sold to private interests who hoped to revitalize the liner in a time share cruise ship format. Financing failed and the ship was put up for auction by MARAD. In 1979, Norwegian Cruise Line (NCL) was reportedly interested in purchasing the ship and converting her into a cruise ship for the Caribbean, but decided on purchasing the former SS France instead. During the 1980s, United States was considered by the US Navy as a troop ship or a hospital ship, to be called the USS United States, but this plan never materialized.

In 1984, the ship’s remaining fittings and furniture were sold at auction in Norfolk. Some of the furniture was installed in Windmill Point, a restaurant in Nags Head, North Carolina. Following the closure of the restaurant in 2007, the items were donated to the Mariners’ Museum and to Christopher Newport University, both in Newport News, Virginia.[21] One of the ship’s propellers is mounted at the entrance to the Intrepid Sea-Air-Space Museum in New York City. Another propeller is mounted on a platform near the waterfront at SUNY Maritime College at Fort Schuyler, New York. Across the Long Island Sound from SUNY Maritime College, a third propeller is mounted at the United States Merchant Marine Academy and is used as a teaching aid for merchant mariners. The fourth propeller is mounted at the entrance of the Newport News Mariner’s Museum. In 1992, a new consortium of owners purchased the vessel and had her towed to Turkey and then Ukraine, where she underwent asbestos removal in 1994. The interior of the ship was almost completely stripped during this time. No viable agreements were reached in the US for a reworking of the vessel, and in 1996 United States was towed to her current location at Pier 84 in South Philadelphia.
[Source: http://en.wikipedia.org/wiki/SS_United_States] 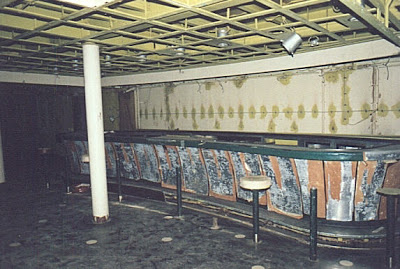 What a parallel we see in the stripping and gutting of this ship in recent decades. Even as America has shipped her once vaunted manufacturing industry overseas, so too did the SS United States have her massive engine and propellers removed. Even as the world’s greatest creditor nation has become history’s greatest debtor nation, so too do we see the stripping of all the signs of wealth and opulence from this once glorious ship. A ship that once possessed the world speed record had to be towed like a derelict barge to her present berth in Philadelphia where she has languished for nearly three decades, rusting away, and falling into a further state of decline. 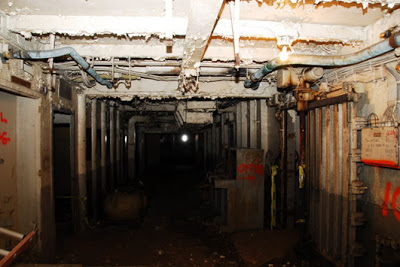 Corridor Inside the SS United States

It seems part of the parable that this ship, bearing the name of the nation that was born in Philadelphia, should come to rest there. Philadelphia is itself a city in decline. Poverty and crime are rampant. The city’s infrastructure is falling into decay. A recent article online bears the following headline:

Reading the article above is sobering. Philadelphia, like the SS United States, is a symbol of the nation. The caretakers of the SS United States have been attempting to “re-purpose” her as a floating hotel/museum/restaurant/shopping/entertainment complex. The effort has been going on for years with no one willing to sign on to the massive financial obligation. America’s economy is in freefall. Unemployment is rampant. Record numbers are receiving government foodstamps, and other benefits to survive day to day. The nation is annually accruing trillions of dollars in additional debt. The wealth and prosperity of the nation are no more than a thin veneer tenuously attached to a rotting infrastructure.

The various articles discussing the dilemma of this ship, which needs $80,000 every month just to pay for her berth, and would require an estimated $150 million to $300 million to renovate, have read like apocalyptic headlines for the nation.

(The above link contains an excellent and insightful video.)

On this May Day, those with ears to hear, and eyes to see, can discern the MAYDAY signal being sent out from the ship of state known as the United States. Even though the nation’s leaders deny, and obfuscate the truth in a manner similar to the captain of the ill fated Costa Concordia after it  struck an underwater reef, the ship is sinking. It will not stay afloat much longer.