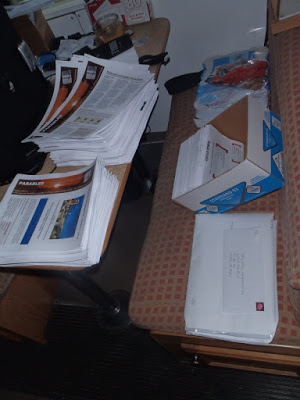 Newsletters and Letters for Men in Prison

This week’s printing of newsletters was the largest so far. Yahweh is blessing the prisoner newsletter ministry as men are sharing them with other inmates and every week more men write asking to receive these writings. The above picture shows the newsletters for the week of June 1st. Newsletters are sent out once a week as many of the men are very hungry for spiritual food to feast upon. Even with this regular pace of mailing I have men writing to me asking me for additional teachings, often requesting that I send them entire books at one time. In the past I have been able to fulfill such requests, but the volume of printing is making it more difficult to do so. Since many of these men have prison sentences lasting for many years, I am counseling them to exercise patience as they will receive all of the writings over time.

Just six months ago I could easily fit a week’s worth of newsletters in half a box such as the one in the picture above. Now it is requiring two boxes to contain them all. This is a blessing as I have prayed that Yahweh would open wide a door of opportunity to share with men in prison. I have found that there is a remnant of men in prison whose hearts have been prepared to hear the message of truth. My heart’s desire is that Yahweh would connect the men whose hearts have been prepared with the message that is available to be sent. He has been doing so.

I initially began back in 2009 by sending out newsletters to two men in a Georgia prison, and a few who were in a local county jail. Over the past six years these men have shared newsletters with others in prison. As the men have been transferred from one prison to another, more men were introduced to the Parables Bookshelf newsletters and wrote to request them. Currently, men from more than thirty prisons in Georgia, and five Federal prisons in other states, are receiving the newsletters.

Interestingly, in one prison in South Georgia, Ware State Prison in the city of Waycross (a fitting name), there are now 35 men receiving the newsletters, and I receive more requests weekly. I am informed by a number of the men that the newsletters are getting passed around widely, generating the interest of others in the prison.

This past Sunday I spent all day from early in the morning until late in the evening, printing, stapling folding, labeling, and attaching postage to the newsletters. Part of the day, and most of the next, were also spent in answering personal correspondence from these men, printing them out specific writings that addressed areas in which they had questions, and preparing them for mailing as well.

There is a great need among men in prison for sound spiritual teaching, something that goes beyond the elementary level. Many, though not all, of these men have had significant exposure to Christianity and the Bible in prior years, but did not walk in the truth. Ending up in prison has been used of the Father to get the attention of many of them, leading them to consider their ways and to finally become willing to hear what God has to say to them.

Recently, I have had men with no Christian background, or men who have fallen under the influence of cults and false religions, writing to me asking that I send them teachings about God that they might know who He is. This is a great blessing. I am delighted to be able to share freely with these men. Please pray that the message of the gospel of Christ and His kingdom will fall upon the fertile ground of the hearts of men who have been prepared to receive it. 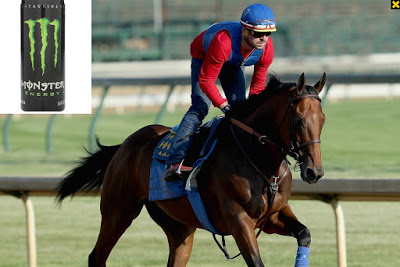 
The deal will give Monster the right to have its logo on the horse’s prerace cooling blanket and for the company’s Monster girls to surround the horse leading up to the Belmont Stakes. The company also will get its logo on the hats of the Zayats, the family who bred the horse… The logo also will be on the collar of jockey Victor Espinoza during the race…


The horse is trying to become the first to win all three legs of the Triple Crown since Affirmed in 1978. In the past 15 years, six horses have won the first two legs and failed to win the Belmont.
[Source: http://es.pn/1Jkp0uj]


It’s “the biggest in the history of horse racing,” said Ben Sturner, who brought the energy drink and American Pharoah owner Zayat Stables together into the seven-figure-plus deal through his Leverage sports-marketing agency…


“If he wins this race, we’ll be a part of one of the most amazing feats of our time,” he said, referring to Saturday’s Belmont Stakes.
[Source: http://nypost.com/2015/06/03/monster-energy-inks-deal-with-triple-crown-hopeful/]

Thanks to Mark for alerting me to this sponsorship deal. It does appear quite significant. As the article above states, this is the largest financial sponsorship of a horse in history. It is also an unusual pairing, as noted by Yahoo Finance Senior Columnist Michael Santoli.

Oddities and aberrations often grab my attention. Things that are out of the normal often are used as messages to reveal something that is hidden. For example why are the o and the a reversed in the spelling of the word Pharoah in this horse’s name? The letters a and o are often associated with Alpha and Omega, a phrase used to describe the Son of God. Would we not expect an anti-Christ to do things backwards? Why would Monster Energy Drink broker this deal with the owner of American Pharoah? What is the significance of this association? Perhaps it has to do with Monster’s logo, which has been widely discussed as being a 666 symbol. 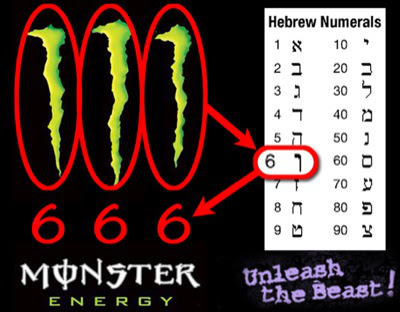 The stylized letter “M” in the Monster logo is comprised of three repeated elements that bear an uncanny resemblance to the Hebrew letter Vav which carries the numeric value of 6. Thus the three Hebrew characters can be viewed as 666. When one adds to this the slogan adopted by Monster which states “Unleash the Beast!,” it is not hard to imagine that the 666 connection is intentional.

It should also be noted that Monster did not sponsor American Pharoah during the first two races of the Triple Crown. The third and final race will be held this Saturday, June 6th, 2015 which some people also view as a 666 date. It is the 6th day of the 6th month, and the digits of the year number 15 also add up to 6. 6/6/15(6)

If you did not read the earlier post on American Pharoah, you can find it at the following link:

We won’t have long to find out if American Pharoah is the first Triple Crown winner in 37 years. The last horse to win all three legs of the Triple Crown was Affirmed in 1978. The last 36 years of horse racing have failed to produce a Triple Crown winner. This is an unusually long dry spell for this achievement. The number 36 is itself an interesting number. It is the multiple of 6 times 6. Also, if you add up all the numbers from 1 to 36 their sum is 666.

Is there a message being proclaimed that it is time to “Release the Beast”? It seems significant that the Pope will be visiting Washington in September on very significant dates. There is additional significance to these dates. Yom Kippur begins the evening of September 22nd. Five days later is the first day of Sukkot, also known as the Feast of Tabernacles. This is a seven day Feast. This Sukkot there will be the final blood moon lunar eclipse of a Tetrad which has occurred in a two year span, each eclipse falling on a Hebrew Feast day. 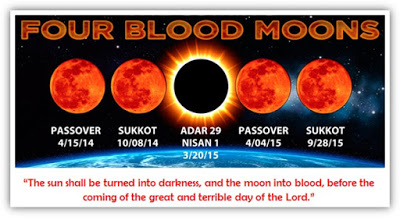 The Pope’s visit is also an anomaly in that it will be the first time ever that the leader of the Roman Catholic Church will address both houses of Congress. We are living in a time when unprecedented events are happening. Let us be alert and sober.