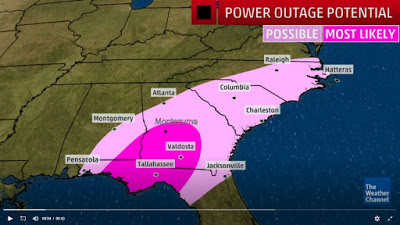 This time last year we also had a hurricane come through here. It gave a little more notice though. That was Hurricane Irma. It was in the midst of September, 2017. Hurricane Michael’s remnants should hit here around Wednesday night. It seems with so little hurricane news of late that Montezuma is getting it’s fair share. Last year’s hurricane came just after Harvey left Houston in a mess. This year’s comes after South Carolina got hit by Florence. It had been ten years prior to last years storm since a hurricane had made landfall in the USA.

We were without power for 3-1/2 days last year. Time will reveal if we are without power any amount of time this year. Whatever the case, Michael is a pretty powerful name. It is the name of the archangel that does battle with Satan and his angels. We read:

Michael and the angels with him cast Satan and his angels down to the Earth. Such an event is still in the future, but it is an occasion that every saint should rejoice at, despite the immediate peril of the church.

Revelation 12:10-14
Then I heard a loud voice saying in heaven, “Now salvation, and strength, and the kingdom of our God, and the power of His Christ have come, for the accuser of our brethren, who accused them before our God day and night, has been cast down. And they overcame him by the blood of the Lamb and by the word of their testimony, and they did not love their lives to the death. Therefore rejoice, O heavens, and you who dwell in them! Woe to the inhabitants of the earth and the sea! For the devil has come down to you, having great wrath, because he knows that he has a short time.” Now when the dragon saw that he had been cast to the earth, he persecuted the woman who gave birth to the male Child. But the woman was given two wings of a great eagle, that she might fly into the wilderness to her place, where she is nourished for a time and times and half a time, from the presence of the serpent.

I don’t know that this storm will foretell anything about that struggle in the heavens between angels. We already have everything we need to know about the encounter, except the precise timing of it. Nevertheless, I may be interrupted by this storm.

At 4 P.M. Tuesday the 9th it had just become a Category 3 Hurricane. Category 3 and above are considered major hurricanes. By tomorrow morning Hurricane Michael should make landfall in Florida. By Wednesday night it should be coming my way. 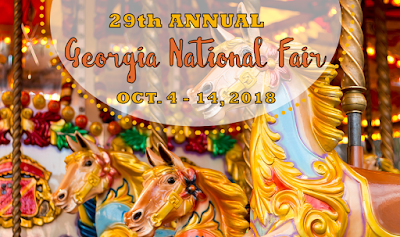 The Georgia National Fair has been held for the past 29 years in Perry, Georgia, a city 20 miles from Montezuma. George Young and I had gone to visit the fair yesterday (Monday). It was George’s first trip to the fair, whereas I believe I have been there most of the years it has been going. I especially like viewing the arts, animals, and the building full of the unusual businesses of Georgia. I spent 6 hours there yesterday and I feel it everywhere in my body. Today I am hearing for the first time in 29 years that they are thinking about closing it for tomorrow.

I will keep you posted.