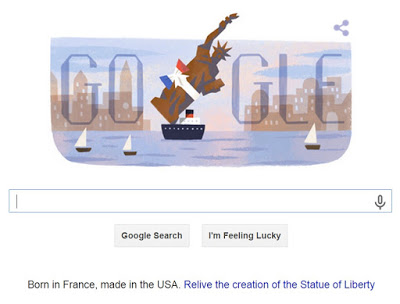 Today’s Google image shows the Statue of Liberty tilted at a severe angle, being carried aboard a ship. Google often places daily artwork on their search page to reflect some historic event, a holiday, or something else of significance. Below the search field there is a link to “Relive the creation of the Statue of Liberty.” Clicking on the link provides the viewer with a historical tour of the creation and construction of this American icon.

The artwork shows the statue with a red, white, and blue ribbon on it. This suggests that the statue is being presented as a gift. These are actually the colors of the French flag. 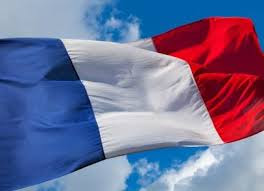 It is commonly stated that the Statue of Liberty was a gift from France to the United States. To be more accurate, it was the gift of French Freemasonry to the Freemasons of America. 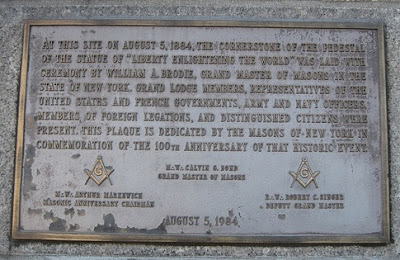 The plaque pictured above is mounted at the site of the Statue of Liberty. It reads,

At this site on August 5, 1884, the cornerstone of the pedestal of the Statue of “Liberty Enlightening the World” was laid with ceremony by William A. Brodie, Grand Master of Masons in the State of New York, Grand Lodge members, representatives of the United States and French governments, Army and Navy officers, members of foreign legations, and distinguished citizens were present. This plaque is dedicated by the Masons of New York in commemoration of the 100th anniversary of the historic event.

Below these words are the Masonic emblems of the square and compass and the names of the overseeing Freemasons. France at the time had a very strong Masonic presence. Benjamin Franklin was himself Grand Master of the French Lodge Les Neuf Sœurs (The Nine Sisters) from 1779 until 1781 when he served as U.S. ambassador to France. I won’t set out all the evidence at this time, but the Statue of Liberty was never truly about liberty, it was about spreading the light of Lucifer to the world. Freemasonry at the highest levels acknowledges Lucifer as the god of the lodge. See the book Dragon Flood for more information on this subject.

Returning to the Google artwork, the statue of liberty was disassembled when it was transported from France to New York. Neither did they have modern ships such as the one pictured transporting the statue. Additionally, the ship appears to be carrying the statue away from New York harbor, rather than toward it. Consequently, what most people perceive when they see this picture is that the Statue of Liberty is being removed. Knowing that Google is a corporate member of the global elite, and articles have shown that the CIA has funded it, one might ask what the true message is that is being communicated by this graphic.

I believe it is fair to assume that the government is forecasting what is shortly to come to America. Specifically, that liberty is going to be removed from the land. It is similar to the image of the Statue of Liberty on the movie poster for Cloverfield, which was released the same year Barack Hussein Obama was first elected to the Presidency of the United States. 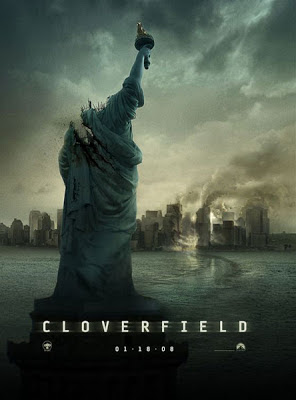 I have received a lot of good comments from readers on recent posts. I will share some of the insights readers have shared.
—
Hi Joseph,


Yahweh has impressed the following on me, while reading your latest post as well as rereading the 2 previous ones.


If I am correct, the American Dream is defined as LIFE, LIBERTY AND THE PURSUIT OF HAPPINESS. It could be compared to an ideological system and personal/corporate/national lifestyle.


Rhodes could also be a play on words for roads.  Roads are pathways: America has walked on these dusty pathways for years,  leading nowhere, seemingly in circles.


Rhodes is in Greece, birthplace of democracy…


This ‘LIFE, LIBERTY AND THE PURSUIT OF HAPPINESS’ ideology/religion/way of life is in direct contradiction to God. It is therefore judged, and awaits only the time of its execution, so to speak, when it will be put to death. The soul that sins, shall die. The soul of this system will die.


The way of Yashua/Christ was opposed to this lifestyle. He came giving up the life of deity to live as man to show man what life was all about.


He gave up liberty and became a servant/slave to and for all of us.


He did not pursue his own ways to achieve happiness – He surrendered his will to the Father even to dying horribly.


Satan copies everything, but ‘reverses’ it for his own purpose, like the A & O.
LIFE, LIBERTY AND THE PURSUIT OF HAPPINESS: death, slavery, misery.


It has military power: who can make war with it?


It has economic/monetary clout: no one can buy or sell…


It has religious power: it deceives and encourages people into idolatry, and worse will enforce it.


First letters of each: M. M. R.    I kid you not, the very next thought I received on seeing those three letters is Might Makes Right.


Blessings,
Marc
—
A brother in Christ named Radhames provided the following link which demonstrates that there are 14 years and 14 days between the events of 9-11-2001 and September 24th, 2015. I recently shared in a blog post that in the Bible the number 14 signifies transition/change. 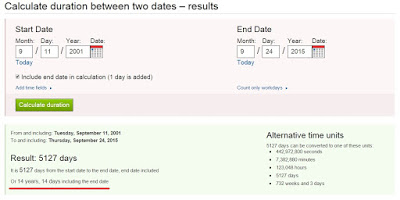 9-11-2001 was the date of the destruction of the World Trade Towers in New York City. This upcoming September 24th is the day Pope Francis will address both houses of the United States’ Congress. This is the first time a Roman Catholic Pope will make such an address. It is also the day after Yom Kippur, the Day of Atonement, 11 days after a solar eclipse, and 4 days before the last of a tetrad of blood moons that occur on Biblical Feast Days. The Shemitah year ends on September 13th, 11 days before this date. The Feast of Tabernacles begins on Sunday Evening, September 27 and runs through Monday Evening, October 5. September is packed full of dates to watch.
—
A number of people wrote to report that a man was killed in Tbilisi, Georgia by a tiger that escaped from the city zoo when it flooded. News articles are reporting now that there were hundreds of wild animals that escaped from the zoo to roam freely through the city.

http://www.cnn.com/2015/06/17/europe/georgia-tbilisi-zoo-floods-death/
—
Sister in Christ Githe from South Africa wrote to report that a lion escaped from a zoo there and has been killing farmers’ livestock.

http://bit.ly/1Ce6AUz
—
Brother in Christ Bill wrote to share the following about the recent article that mentioned the MayDay album sponsored by Monster Energy.

Brother Joseph, it struck me when seeing the MayDay album cover that the image might be a mockery of David slaying Goliath. The helicopters seem to be in formation, but there is a gap.  And the fire below could possibly be a helicopter brought down by the parody of David.  The album could be understood as May Day believers, which would be those in agreement with Beltane and with Satan.  The destruction of a helicopter would be in line with Satan, and the holiday of Beltane was celebrated with bonfires and the sacrifice of lambs which are young sheep.  And which are also those that belong to Christ.  Just a thought.  Thank you for your work and may you be blessed.
—
Sister in Christ Deidra shared the following thoughts on the NBA Basketball Championship game played last night.

Deidra again. So, as the whole world probably knows, the NBA championship was last night. I didn’t get to see it all, but when I woke up this morning, I woke up to the fact that the Golden State Warriors beat the Cleveland Cavaliers.


Two things struck me about this win (although I kind of knew it was going to happen).


1. LeBron (King James) James of the Cavs shortly before in a bucket full of pride during an interview declared himself the best player in the world – and he “lost it all” last night.


2. Although I had watched almost every game and am very familiar with the NBA, the names of the teams struck me this morning as I heard the news.


After reading so many of your posts over time, I have learned to really take a look at major sporting events on the world stage. Since the names struck me this morning, I decided to look up their meaning and I found it interesting…


In that statement I saw a message both of severity and of encouragement. Severity in that the messages you have been bringing are so sobering. Anarchy is coming soon and many aren’t prepared. They are showing lack of concern and will be overtaken by those warring for satan…


Anyway, just something I noticed. I hope you are well today! Stay cool in this heat 🙂


Hi Joseph —
Georgia, of course, is both a nation and a U.S. state. Also btw the name of my deceased mother.


‘MAYDAY’ image — the use of twin exclamation marks (the first inverted) is part of Spanish grammatical construction. May-day or May First is also one of the principal pagan/wiccan/satanic feast days, typically celebrated with fire and blood-sacrifice. The rituals of that day, which are very ancient, involve fertility (sexual licentiousness as a way of ‘ensuring’ crops).


When I first saw the ‘slingshot’ photo, I thought of biblical David. The image is of a young(ish) male and the posture is one of, perhaps, overwhelmed perplexity and impotence. Brought a slingshot to a helicopter war.


Of course, in his scuffle with Goliath, one slingshot was all David needed. It was David’s faith in, and indignation for, the Lord that brought victory. Amazingly, David went on to accomplish even greater things.


However I think your interpretation is what is intended here by Monster Energy — that ‘anarchists’ etc. are the true heroes of our time, bravely standing up to yadda yadda yadda. “I’ll do whatever I want, and that makes me a hero.” So much modern advertising/propaganda seeks to sell the Blasted Generations the conceit that wildness, cynicism, and anarchism are ‘cool’. Also, the word anarchist is similar to ‘antichrist’. The spirit of leftism, ‘women’s liberation’, and ‘progressiveness’ are all spirits of deconstruction and destruction. Those who cannot build, tear down. Those who cannot rise to the accomplishments of others, seek in resentment and rebellion to tear-down the accomplishments of others. Only in this way can they ‘feel better about themselves’ . . . much less Be Cool! :O) We see this everywhere in America, from grade schools to the presidency.