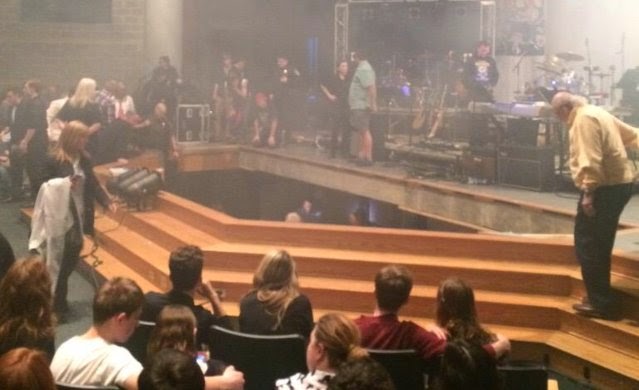 A highly symbolic event occurred three days ago (April 23, 2015). It has been reported in all the major media news outlets. I came across a news report on the event and then received e-mails in a short period of time from three brothers and sisters in Christ who wrote to make sure I had not missed what they perceived to be a poignant message for America.

Westfield High School in Westfield, Indiana has staged a major production for each of the past three years. It is a retrospective musical that features songs from the beginnings of the Rock and Roll era up through more recent decades. The production also serves as a history of events which have occurred in America during this same time period as the songs performed are interspersed with short speeches recounting events such as the assassination of President Kennedy, the civil rights movement, the Korean and Viet Nam wars, and more recent events such as the Space Shuttle Challenger calamity and the fall of the World Trade Centers. On Westfield High School’s website the show is billed as “an electrifying journey through history using music.” 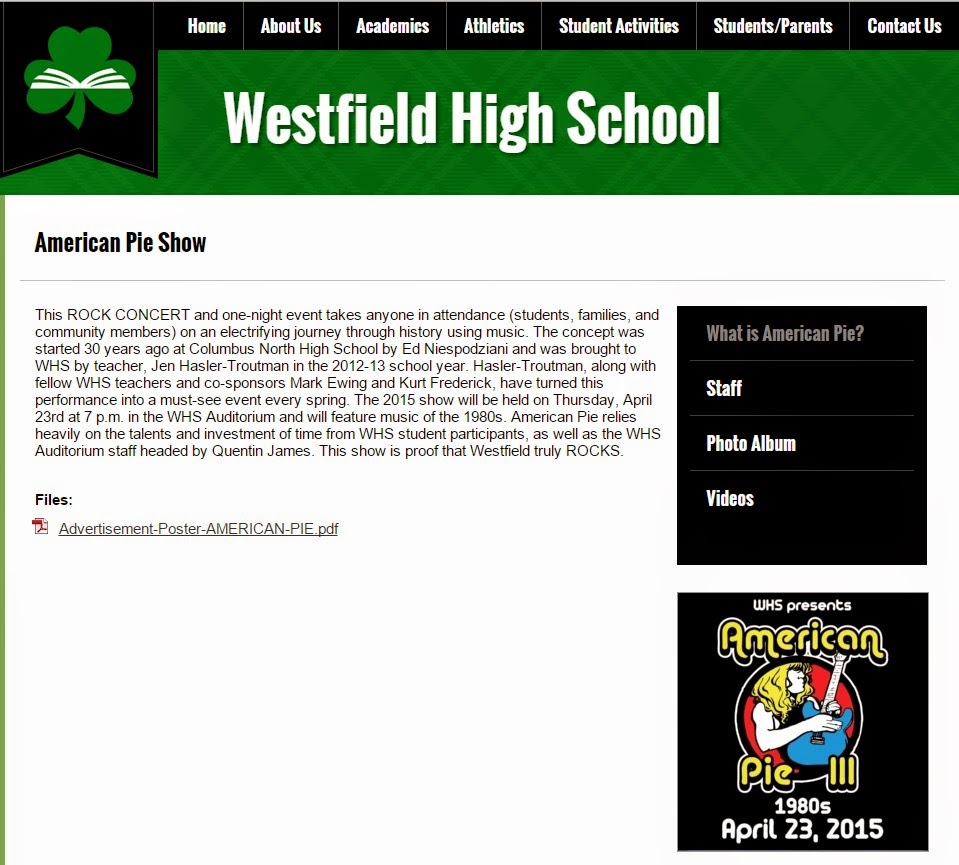 At the end of the 3 hour production before a sold-out, overflow crowd of more than 800 people, as the last song was being performed and the entire cast of the musical came on stage and began jumping to the music, the stage floor collapsed sending dozens of high school students plunging into the orchestra pit which is 12 feet below the stage. It was reported that 16 students were injured, though none critically. The worst injuries were a broken leg and a head injury. The moment the stage collapsed was caught on video and can be viewed below.

What arrested the attention of the individuals who wrote to me about this event was the name of the musical production. It was titled “American Pie.” On numerous occasions in the past I have written about a prophetic message for America contained in the song American Pie which was recorded by Don McLean in May of 1971 and released in November of that same year. Don McLean wrote the song as well as performing it. The song has obtained great popularity. It climbed to the number one most popular song in America after its release, and the Recording Industry Association of America has listed it as the number five song in their project titled Songs of the Century.

In recent years there have been some crass, sexually debauched movies bearing the name American Pie, and I wanted to ascertain whether this high school musical was named in reference to the song or the movie. The question is answered in the historical information describing the musical on the Westfield High School website. It states, “The concept (for the musical) was started 30 years ago at Columbus North High School by Ed Niespodziani and was brought to WHS by teacher, Jen Hasler-Troutman in the 2012-2013 school year.” The first movie titled American Pie was released in 1999, only 16 years ago. The high school musical production began 14 years prior, so the films could not have served as inspiration for the naming of the musical production. Columbus North High School’s first production of this musical occurred in 1985 which was 14 years after the release of Don McLean’s song, which leads to the reasonable conclusion that the song served as inspiration for the naming of the musical.

The lyrics to this song contain many profound statements. They refer to the church bells all being silenced, and the Father, Son, and Holy Ghost all leaving America. The song describes Satan laughing with delight as the nation goes up in flames.

So come on Jack be nimble, Jack be quick
Jack Flash sat on a candlestick
‘Cause fire is the devil’s only friend

The most memorable lines from this lengthy song are in the oft repeated chorus.

I have written about this song in past blogs as it was selected to be performed during Barack Obama’s inaugural festivities following his first election to President of the United States. A huge concert took place in front of the Lincoln Memorial in Washington, D.C.. Videos showing Obama singing along with the song and mouthing the words “This’ll be the day that I die” are readily available to be viewed online.

The venue is also highly symbolic, as Lincoln was assassinated during his second term in office, and it was during his presidency that the nation was plunged into a bloody civil war, constitutional rights were suspended, and thousands of Americans were locked up for the duration of the war without trial or a court appearance. Opposition in the press was brutally suppressed and those states and citizens who stood against an expansion of Federal power were crushed by military force.

With this background, what occurred at Westfield High School may be understood as being highly significant. This was a musical production that served as a historical review of America in its declining years. Unintentionally, the production ended with a sudden collapse as the song Don’t Stop Believin’ by the group Journey was being performed. When the stage collapse occurred, the music peremptorily terminated (“the day the music died”). The musical “journey” ended. Those who have eyes to see will perceive that a further event in America’s history was unintentionally enacted in a very profound manner. A collapse is coming and it will result in the injury of many while bringing a swift and calamitous end to the party atmosphere of American society.

In researching this story I found that the promotional material for this production is changed annually. Following is an advertisement for the musical in a previous year. 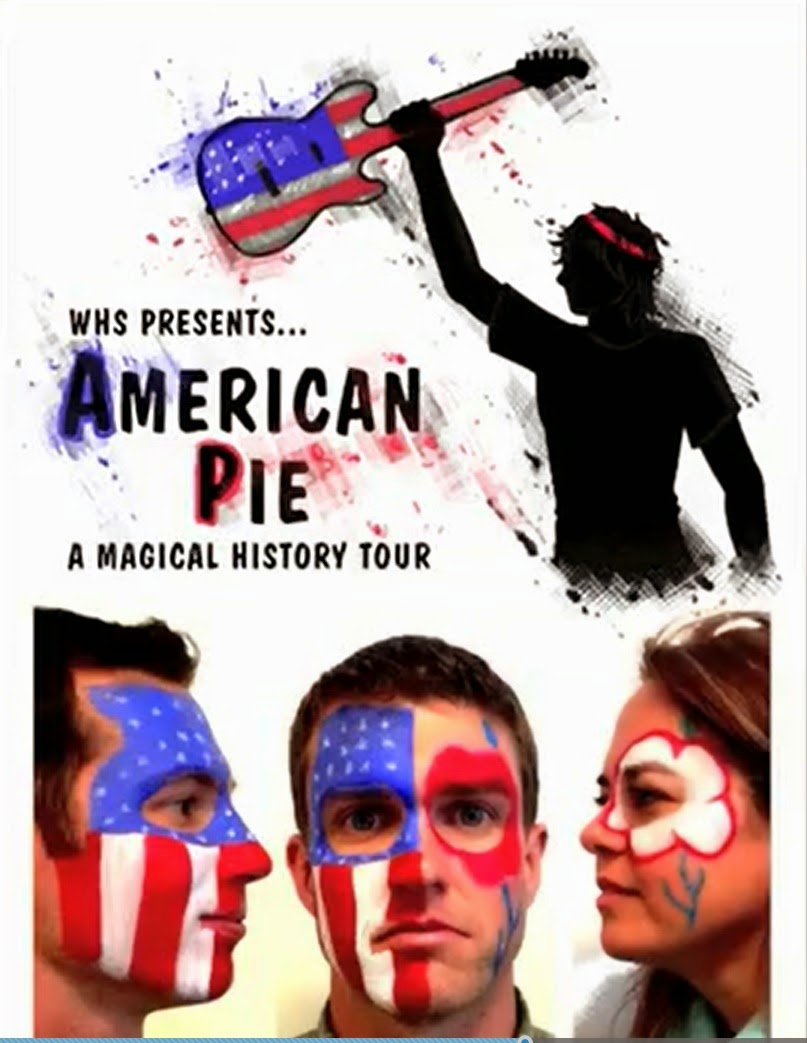 Compare this to the pre-production advertisement for this year’s musical. 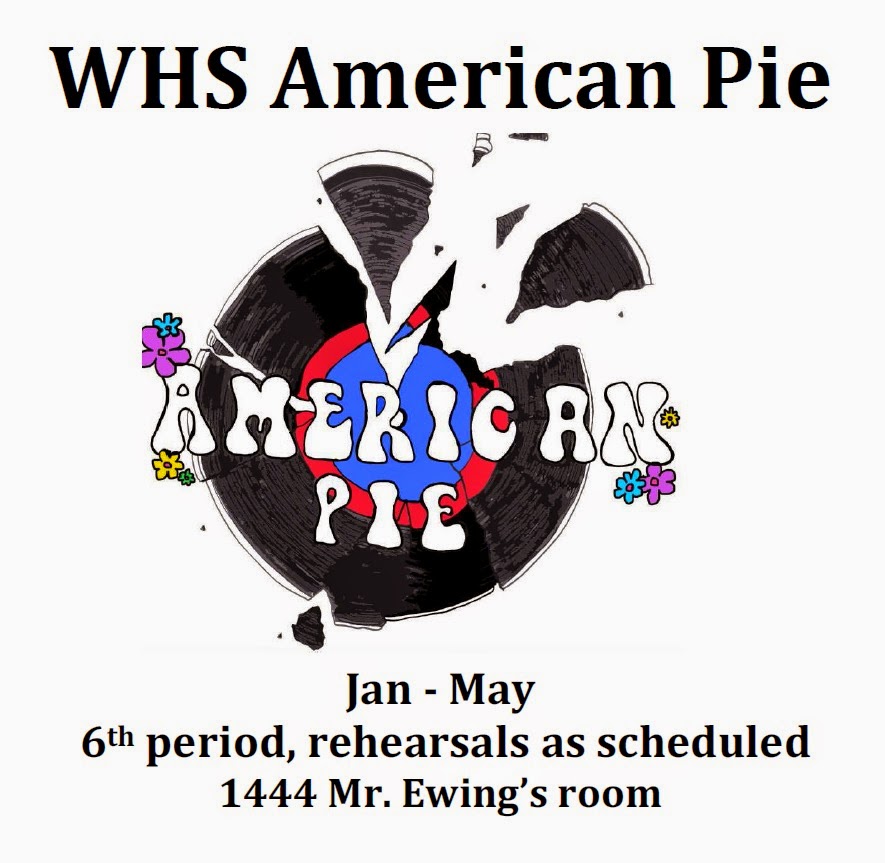 The image of a shattered record speaks symbolically of the music dying. Unknown to the school faculty members who oversaw this production, there would be a very literal fulfillment of this imagery as the stage collapsed sending all of the performers plunging into the “pit” below and ending the music in an unanticipated manner. Notice also that the colors red, white and blue all appear in this advertisement and are part of the shattering.

The song American Pie has always had a strong prophetic element to it. 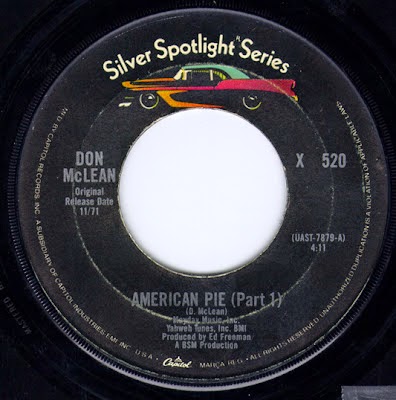 Original Release of American Pie as a Single

If one looks closely at the label of this record they will see that it was released by Mayday Music, Inc. under the label Yahweh Tunes.

The term “Mayday” is recognized as an international distress sign. The label Yahweh Tunes identifies this record as being a message from God. Don McLean has always remained tight-lipped about the meaning of the lyrics of this song. It has remained enigmatic to many, but what is apparent is that the song speaks of dark days for America and an end to song and mirth. A day of fire and diabolical calamity is forecast. It is not only a day in which the music dies, but in which many people will die (“This’ll be the day that I die.”)

44
The number 4 denotes humility. The word humility comes from the same root as the word “humus.” It speaks of lowliness. The nation which has ascended the highest in pride and material success stands to suffer the greatest fall.

44 is 22 x 2. The number 22 denotes flesh cutting, a removal of wickedness. The number 44 therefore speaks of a double portion of judgment upon the flesh.

Revelation 18:4-7
And I heard another voice from heaven, saying, “Come out of her, my people, that you may not participate in her sins and that you may not receive of her plagues; for her sins have piled up as high as heaven, and God has remembered her iniquities. Pay her back even as she has paid, and give back to her double according to her deeds; in the cup which she has mixed, mix twice as much for her. To the degree that she glorified herself and lived sensuously, to the same degree give her torment and mourning…”

33
Yahshua was 33 years of age when He was crucified for the sins of mankind. The Son of God became sin on the cross that He might bring an end to sin. 33 is therefore associated with judgment upon sin.

33 is 11 x 3. (44 is also 11 x 4) The number 3 denotes fulness and completion. E.W. Bullinger in his book Number in Scripture provides the following insight into the Biblical significance of the number 11.

Is this not what was portrayed as the stage collapsed and instantly transformed a well-choreographed musical production into a scene of chaos?

The collapse occurred during the final song of the production. A song by the group Journey was chosen to close the show. That the collapse occurred at this point signifies that the end is near for America as a free and prosperous nation. The journey of America as a constitutional republic, the envy of all the world, is near at hand. Although it is inconceivable to the majority of Americans that their nation could ever cease to be “the land of the free,” a land of liberty and prosperity, the day is near at hand when the sound of mirth and festivity will no longer be heard.

The sound of joy will be replaced with cries of pain and despair. Despite the determination of many to Don’t Stop Believin’ that good days lie ahead, the days approaching will be ones of bitterness and woe. What is coming will happen suddenly. Do not the Scriptures reveal that judgment comes suddenly to a nation and a people who give themselves to evil?

Ecclesiastes 9:12
Moreover, man does not know his time: like fish caught in a treacherous net, and birds trapped in a snare, so the sons of men are ensnared at an evil time when it suddenly falls on them.

The cup of America’s iniquity is full. The end of her journey of rebellion is nearing an end. Do not be found partying and celebrating immorality when the collapse comes. It is a time to be sober, to be vigilant, and to seek humility and righteousness that we might be hidden in the day of Yahweh’s anger (Zephaniah 2:3).