There is much happening in the news, and at times it is too much to keep up with it all. However, there were a couple of things in the news that have bearing upon past posts and I thought I would pass them along for your consideration.

Many will remember the post where I spoke of the prophetic significance of the horses that competed in the Kentucky Derby. Both Hillary Clinton and Barack Obama were present for the race, being in the thick of their own race for their parties nomination. Hillary Clinton was seen near the only filly that ran in the race (Eight Belles), and she picked this filly to win. Barack Obama chose to root for another horse named Big Brown. 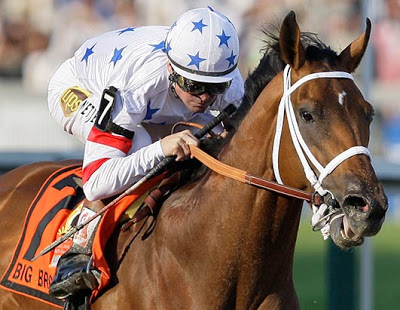 In a remarkable parallel to their political race, Big Brown came in first and Eight Belles came in second. Eight Belles after the race, during a cool down lap, shattered both of her front ankles and had to be euthanized on the track. All of these things seemed highly prophetic, as Hillary was taken out of the race altogether after Obama won the nomination. When many had believed she would be chosen as Obama’s running mate, she was passed over instead. You can find the earlier blog that contained this story here:
https://heart4god.ws/wordpress/2008/09/sarah-again.html

A brother in Christ brought it to my attention that Big Brown was in the news again recently. I will include a portion of an article by the Associated Press.

Big Brown’s racing career ended Monday when the Kentucky Derby and Preakness winner injured his right front foot during a workout at Aqueduct Race Course in New York. Michael Iavarone of IEAH Stables, co-owners of Big Brown, said the 3-year-old colt tore a three-inch piece of flesh off the foot after it collided with his right rear foot while working over Aqueduct’s turf course with stablemate Kip Deville.
“This was a complete fluke,” Iavarone said. “He hadn’t had issues with his feet for awhile and to have him come up just like this was a shock to all of us.”
Iavarone said the injury would take around two months to heal, making it impossible for Big Brown to run in The Breeders’ Cup Classic on Oct. 25 at Santa Anita. With the strapping bay due at Three Chimneys Farm in Midway, Ky. by the end of the year to begin his stud career, Iavarone said there simply isn’t enough time to get Big Brown back on the track one last time.
“We don’t have a choice but to retire him,” Iavarone said. “It’s gut-wrenching…”
Big Brown will spend several weeks in New York while he recovers before being shipped to Three Chimneys. The injury caps a brilliant but somewhat controversial career for Big Brown, who won seven times in eight starts, including dominant runs in the Derby and the Preakness, and earned $3.6 million.
His bid to become the first Triple Crown champion since 1978 ended during a bizarre Belmont Stakes in which he was eased by jockey Kent Desormeaux at the turn and he trotted across the finish line far behind the rest of the field…
Big Brown bounced back from the Belmont with wins in the Haskell Invitational and the Monmouth Stakes and was poised for a shot at Curlin, horse racing’s all-time leading money winner. Not anymore, a fact that “saddened” Curlin’s majority owner Jess Jackson.
“I am equally disappointed that Big Brown and Curlin will never compete against each other,” Jackson said in a release. “It was a dream of mine and thousands of other fans of the sport.”
Instead, Big Brown will head to a potentially lucrative stud career. Case Clay, president of Three Chimneys, said he’s unsure when his newest star would arrive at the farm in central Kentucky.

One of the first things that stood out to me is that Big Brown’s injury was self-inflicted. He literally kicked himself, and thereby took himself out of his final race. I do not know if this portends anything for the political race, but it is something to keep in mind.

More recently I wrote of the financial meltdown in Iceland. I mentioned that what is happening in Iceland gives a look ahead for what is coming to America. Iceland has continued to be in the news as things are merely getting worse there. You can find the earlier post on Iceland here:
https://heart4god.ws/wordpress/2008/10/chill-wind-is-blowing.html

Following are a couple of news items.

The beleaguered Icelandic stock exchange plummeted by 77 per cent yesterday, following a three-day suspension of trading.
The OMX Iceland 15 Index fell by 2,326.2 to 678.4 – the lowest since April 1996. The fall in shares contrasted sharply with a strong performance by European and Asian shares for the second consecutive day. The Icelandic index has lost 89 per cent of its value this year, making it the worst performing stock exchange globally.

Shares in six financial companies, including the now-government controlled Kaupthing, Landsbanki and Glitnir, remained suspended, as Iceland has been hit hard by the global financial crisis. Iceland has been forced to ask for help from Russia and the IMF to save its beleaguered economy. Trading in Icelandic shares was suspended on 9 October after the OMX Iceland lost 30 per cent of their value in nine days.

Until recently, 25-year-old Audur Elin Sigurdardottir was living a modest Icelandic dream — renting an apartment and two cars with her boyfriend on their one full-time and one part-time salary. 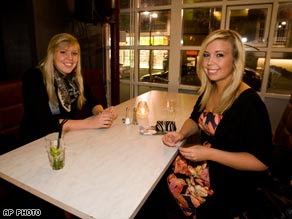 Audur Elin Sigurdardottir, right, has been forced to take three jobs to pay her bills.
“Now I live at home with my Mom, I work three jobs and it’s still not enough to pay my debts,” said Sigurdardottir as she digested the island’s daily onslaught of bad news over a calming glass of wine with a friend.
Iceland’s financial meltdown isn’t just a banking calamity — it is also destroying dreams and turning lives upside down across this once affluent nation.
Just last year, Iceland won the U.N.’s “best country to live in” poll, with its residents rated the most contented in the world. The stock market was booming, cash-rich companies helmed by youthful CEOs were on an acquisition spree across Europe, and Icelanders enjoyed one of the globe’s highest per capita incomes.
No more. The global financial crisis has washed up hard on the shores of this volcanic island of 320,000 people, its decision to swap cod fishing for a complex debt laden economy exacting a heavy toll.
For ordinary Icelanders, the biggest problem is that they were encouraged to upgrade to a more luxurious lifestyle by buying houses and cars that were financed by 100 percent loans based on a spread of foreign currencies.
The loans, called “MyntkÊorfulÄan” or “breadbasket” loans, were immensely popular because of their low interest rates compared to loans based on the then strong krona. But thousands of people are now defaulting as the Icelandic currency plummets.
Classified advertisements are mushrooming in the local newspapers with car owners offering cash of up to 770,000 krona ($6,300) to anyone willing to take their car off their hands and assume responsibility for their “bread basket” loan.
Kolbeinn Blandon, who owns the Hofdahollin car dealership on the outskirts of the capital, says foreign loans “are killing us.”
Blandon usually sells up to 150 cars a month. This month he’s sold just eight so far and his staff chat idly as they take a long smoking break without a customer in sight.
“People are buying much cheaper cars, the expensive lot is just standing collecting dust, it is not selling at all,” he says.
Blandon is now planning to export the cars back to Europe, where the price he can get from the strong euro will hopefully outweigh transportation costs…
“I am really afraid of what’s going to happen,” said Alexandra Sif Herleifsdottir, a 19-year-old bar worker. “We are afraid we might lose our jobs.”
Her friend Sigurdardottir said she has cut back spending, with a drink after work one of her last remaining luxuries.
Icelanders are also increasingly angry, looking for somewhere to point blame for the country’s spectacular fall.
Olafur Sigurdsson, 21, a school worker, is furious at both the banking executives who have retreated behind closed doors and the government, which has been making daily — but incoherent — TV appearances to explain the crisis.
“These people are going on TV and we can see in their faces that they are powerless,” he said glumly.

In a jibe at the government, Elisabet Jokulsdottir carried a sign at a protest rally outside the central bank offices in Reykjavik: “Stay calm while we rob you…”
In the past week, the government has used emergency powers to take control of the country’s three major banks, trading on the stock exchange has been suspended and attempts to put a floor under the free-falling krona have failed dismally.
Supplies of foreign currencies have dried up and, as Britain invoked anti-terrorism laws to freeze assets of Icelandic banks, the nation has never felt more isolated.
“There’s a feeling in the air I’ve never felt before,” said 21-year-old Olaf Helgason. “It’s almost like 9/11 again. It feels like we are going through something that only happens once in a lifetime.”

The stock market has been all over the place recently. It has been setting records in both directions, but is steadily trending downward. These wild gyrations do not bode well. They are a sign of a market out of control. If we were looking at the vital statistics of a patient in a hospital we would definitely be calling in a minister at this time.