Today’s date is a significant one. Twenty-two signifies flesh cutting. It is a multiple of eleven, and we are in the eleventh month. The number eleven bears a very somber message. E.W. Bullinger writes the following concerning it:

Barack Hussein Obama is America’s 44th President. This too is a multiple of eleven. Considering the fact that he was not born as an American citizen, and is therefore not qualified for the position of President, his position is viewed as a subversive one by many.

I have written much of the symbols associated with Barack Obama relating to his call as a beast ruler. The Secret Service nicknamed the armored car built for him “The Beast.” The Illinois State lottery’s pick three numbers came up 6-6-6 the day his presidential victory was announced. The headquarters for Obama’s campaign organization in Chicago is 60606, etc..

I have also shared that Barack Hussein Obama was raised up by Yahweh to serve as a scourge and a destroyer to a nation that has given itself to profound evil. The blood of more than fifty million murdered babies cries out from the ground for Yahweh to judge and avenge them.

Ezekiel 21:31-32
“And I shall pour out My indignation on you; I shall blow on you with the fire of My wrath, and I shall give you into the hand of brutal men, skilled in destruction. You will be fuel for the fire; your blood will be in the midst of the land. You will not be remembered, for I, Yahweh, have spoken.”

The recent Newsweek cover depicts Barack Obama in the image of Shiva, the Hindu god of death and destruction. 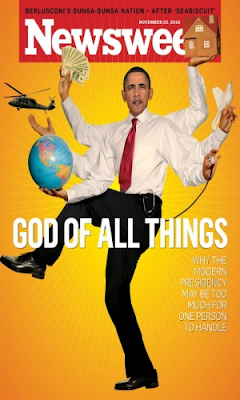 Pictured below is the demon god Shiva performing the dance of death. 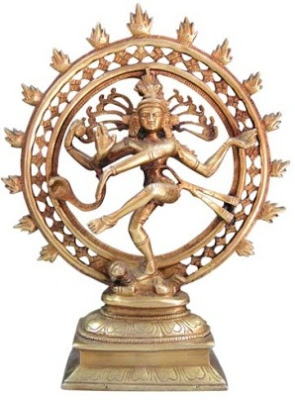 One will note a serpent like quality to these depictions. All is coiling and crooked, rather than straight and upright.

I want to tie this in to a recent discussion I had with a sister in Christ over the occurrence of a Blue Moon last night. Perhaps you have seen this mentioned in the news. Popular thought today has adopted the thought that a Blue Moon is a second full moon occurring in a single month. This is not the actual understanding of a Blue Moon. Following is an excellent article that details how this false understanding came about, and what a Blue Moon was considered to be originally.

I mention this because of the significance of the number thirteen. We live in a year that will experience thirteen full moons. The thirteenth, and final full moon of this year will occur on December 21st.

E.W. Bullinger has a lengthy exposition of this in his book Number in Scripture. I will include an excerpt.

I would point out that America’s foundation as a nation is marked indelibly with the number thirteen. There were thirteen original colonies that became the thirteen states of the Union. These are represented by the thirteen stripes on the American flag, and the thirteen arrows in the talons of the eagle on the Great Seal. There are thirteen stars depicted on the images of the nation’s money, and many more examples of this association could be provided.

As difficult as it is for those who have been steeped in the patriotic fervor of America and her religious system, America’s government was never formed to be a Christian nation. America traces its origins back to the American Revolution. The word revolution is defined as “an act of rebellion.” Both of these words, revolution and rebellion, are mentioned above in Bullinger’s account of the significance of the number thirteen.

I do not have space to write of the Luciferian foundations of America’s government here. For those interested, you can read about it at the link below:

A further note on the symbolism of the Blue Moon is revealed in a quote on the Wikipedia article on this subject.

Some interpret this “blue moon” as relating to absurdities and impossibilities.  An alternative interpretation uses another Middle English meaning of belewe, which (besides “blue”) can mean “betray.”
[Source: http://en.wikipedia.org/wiki/Blue_moon]

I share these things to alert the people of God to the hour in which we live. I have been posting much about the bus the Father has instructed me to convert to a motorhome. The Father has referred to it as “an ark.” The ark of Noah’s day was a place of habitation to ride out a day of judgment. I am persuaded that the Father has the same meaning in mind in referring to this bus as an ark.

America and the nations are entering days of great judgment and tribulation. America has been given into the hands of evil men skilled in destruction. Most of the destruction has been going on clandestinely thus far. Soon the extent of America’s decline will be unveiled. Words like “disintegration, chaos, disorder, collapse, and death” will be used to try to describe the end of a mighty nation that boasted of being the world’s last superpower.

I am not building this ark because I think it is a neat idea, or because my soul was led to do so. I am doing so at the leading of the Spirit of Christ.

I cannot tell you what the coming days will look like, or predict dates of calamitous events. I do know by the Spirit that America’s fall is certain, and is coming swiftly. At this hour she has been given into the hands of evil men skilled in destruction. The freedoms of Americans are being stripped away. One cannot even fly on a plane without subjecting themself to invasive searches or body scans. The government is conditioning the people to the thought that they should be the gatekeepers of all movement. Freedom is being replaced with draconian controls.

The middle class is being destroyed. Their wealth is being given into the hands of global bankers, while the people are being saddled with debt greater than any nation in the world’s history. Just last night the news reported that America’s course is unsustainable.

I am not alarmed by these things, for as a disciple of Christ I am merely an alien and a stranger in this world. I have no land or home or property I am seeking to protect. The church is purified in days of evil.

Isaiah 26:9
For when the earth experiences Your judgments the inhabitants of the world learn righteousness. 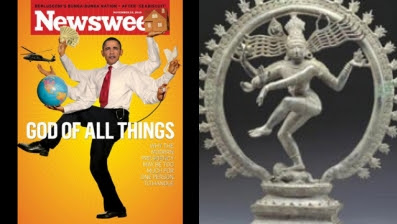 The Newsweek cover shows Obama with several arms carrying policy issues while balancing on one leg. The headline reads: “God of All Things…”


Shiva, who is one of three pre-eminent gods in the Hindu religion along with Brahma and Vishnu, is considered the destroyer of the world, which must end, metaphorically speaking, in order to be reborn as a more universalistic place…
[Source: http://www.foxnews.com/politics/2010/11/21/newsweek-depiction-obama-lord-shiva-upsets-indians/?test=latestnews]

Let us not sleep as others do, but rather be alert and sober.