One Man’s Ark – Ready to Sail 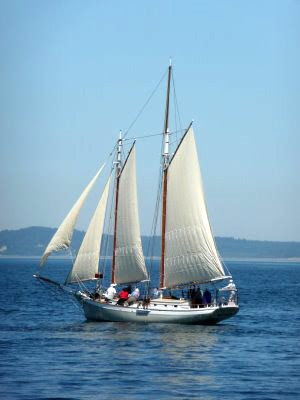 In this hour when the Spirit has been directing many of His people to prepare an ark, a place of shelter in the coming storm, I found a news article that was posted recently on CNN to be full of significance for this hour. The news article reported on a man who had been laboring on building a sailing boat on his property for the past 33 years. The man finally completed this labor and took the boat sailing on Seattle’s Puget Sound.

CNN picked up the news story from King 5 News out of Seattle.

http://www.king5.com/localnews/stories/NW_052909WAB-dolores-m-jackson-TP.2bf952b4.html
Seattle lies in King County in Washington State, and it adds some significance that this story derived from that particular station. Five is the number of grace. It was certainly an act of grace by the great King of the Universe, during a time of necessary judgment upon the nations, that resulted in Noah receiving instructions to build an ark.

I have often heard that it took Noah 120 years to build the ark, and have on occasion repeated what I had been taught. Yet, a careful reading of the Scriptures nowhere reveals how long that Noah actually labored on this vessel. The 120 years comes from a statement by God at the time where He declared that man’s years would be 120. We are not given the age of Noah when he began construction. We are merely told that at the age of 500 Noah became the father of Shem, Ham and Japheth. We are later told that Noah was 600 years old when the flood came upon the earth.

Roy Jackson is the man who built the boat in Seattle. He also labored on the boat with His wife Dolores (for whom the boat is named), and his two sons Donald and Benny. Occasionally, he enlisted others in his work. He contracted to have the sails made and also had assistance in laying out the frame and in caulking the hull.

Wooden boat manufacture has remained fairly standard since the days of Noah. We read that Noah was instructed by God to build the ark of Gopher wood and to seal it inside and out with pitch. Builders still choose their wood carefully when building a boat, wanting a wood that is stable, not subject to much shrinking or swelling, and which is resistant to rot. Wooden vessels must still have all their joints sealed, though pitch has been replaced by modern caulking where it is available.

Roy Jackson spent 33 years building his vessel. A detail that is reminiscent of Noah’s use for the Ark, Roy built his boat in a barn. Noah’s ark actually served as a floating barn. Another detail is that Roy’s barn was located in Crystal Springs. After Noah completed his ark we read:

Genesis 7:11
In the six hundredth year of Noah’s life, in the second month, on the seventeenth day of the month, on the same day all the fountains of the great deep burst open, and the floodgates of the sky were opened.

The fountains of the great deep evoke images of subterranean springs of water. I do not doubt that the Lord has brought this news item to the attention of the nation at a time when a great judgment is once more set to come upon the land. It is time to be in readiness, and the Spirit of Christ is directing a listening remnant to take certain steps in preparation for the things that lie ahead.

There is further significance found in the name on the boat. The boat was christened the Dolores M Jackson. Following is the meaning of the name Dolores from the website www.behindthename.com

Pronounced: do-LO-res (Spanish), də-LOR-is (English) [key]
Means “sorrows,” taken from the Spanish title of the Virgin Mary María de los Dolores, meaning “Mary of Sorrows.” It has been used in the English-speaking world since the 19th century, becoming especially popular in America during the 1920s and 30s.
[End Excerpt]

Noah’s ark was used in a time of great sorrow. God was grieved at the sin of man, and mankind also knew sorrow when the judgment of God fell upon them. Our English word dolorous comes from a similar root.

dolorous: causing, marked by, or expressing misery or grief

I would also comment on the date of the sailing of this vessel. Its maiden voyage was on 5/29/2009. Once more we have the number 5 symbolizing grace. It is followed by a repetition of the numbers 2 and 9. E.W. Bullinger shares the following concerning these numbers.

Could there be a more fitting date upon which to launch this vessel? Even as the ark of Noah was built in expectation of judgment, so the Spirit of Christ is indicating that His people should prepare themselves for the judgment that is close at hand.

I have shared recently that when God repeats a sign, as He has done in providing this double witness of the number 29, it is indicative that a matter is settled by Him, it will not be repented of, and it will quickly come to pass.

On a related note, many have been busy getting their own arks ready. I am not suggesting that God will have all prepare in the same way. Each person needs to be listening intently to the voice of the Spirit and doing what the Spirit leads them to do. This is what Noah did, and God gave Noah very precise instructions.

Last week Randy Simmons and I both worked on our individual projects as the Spirit directed us to do. Both of the gas tanks in the motorhome Randy purchased contained rust and needed to be removed, and sealed. The motorhome would not run for any length, for once it was in motion the sediment was stirred up in the tank and it would clog up the filters. He removed both tanks and has them at a local radiator shop where they are being cleaned and sealed. Today Randy is working on sealing the roof against leaks. I am reminded of Noah sealing the ark with pitch, and Randy may use something very similar to pitch to accomplish the same purpose.

Last week I finished cleaning the bus for the sister in Christ for whom it was purchased. I replaced some broken light covers outside and replaced bulbs, insuring that all is in working order.

On my own van/camper I found that the pump that takes water from the potable water tank and delivers it to the sink and toilet was not operating. I purchased a replacement and installed it. I also flushed the 20 gallon potable water tank with a combination of bleach and water and replaced several hoses that are part of the system. I learned the value of carrying water when camping when the Lord directed me to spend two 40 day periods camping in the Oconee Forest of Georgia about 4 1/2 years ago. Water becomes a precious commodity, especially clean drinking water.

Yesterday, I picked up the pop-up trailer my daughter recently purchased. It has a few issues, the most pressing of which is repairing the lift that raises the roof. The gears are broken and need to be replaced. I dropped it off at a local RV service center and am awaiting word from them.

If we will simply do what we are able the Spirit directs us to each day, without procrastinating, we will be ready when the time requires it. Noah did not delay in obeying the voice of God, and he was therefore ready when the flood came upon the earth.

I found it interesting to note that Noah entered the ark seven days before the flood came. He was inside with his loved ones and all supplies a week before God’s judgment came. I can envision the Spirit of Christ also directing His remnant to enter into the places prepared for them a short time prior to great calamity striking. Let us all be listening intently, and obeying without delay.

And here is a short news article worth consideration. It speaks of a new type of cloud formation that is being witnessed across the globe. It is described with the following words:

Whipped into fantastical shapes, these clouds hang over the darkening landscape like the harbingers of a mighty storm.