Out of the Pit

I thought I would take some time to get caught up on some recent news events even though I have recently started a new series of writings which I anticipate continuing for some time (the Foundations series). I had seen a news item last month regarding the National Corvette Museum near Bowling Green, Kentucky. The museum is located in Kentucky due to General Motor’s Corvette factory, the only one that produces these iconic cars, being situated half a mile away. Incredibly, a large sinkhole developed right under one of the buildings of the Museum. The building, called the Skydome, housed the rarest and most expensive cars in the Museum’s collection. 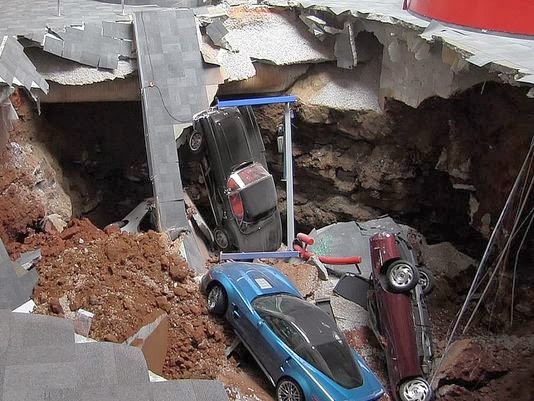 The sinkhole was fully enclosed inside the building, which is a rare occurrence. I have seen news articles in the past where sinkholes have swallowed up houses. The vast majority of sinkholes occur away from buildings, however, and I have not heard of one appearing directly underneath a large public venue such as this museum.

I briefly pondered the symbolism of this event when it occurred back in mid-February. Did it stand as a symbol of the demise of America’s automotive industry? Was it a message regarding the sudden and unexpected end of life in the fast lane of America? Did it signify a collapse of the nation’s infrastructure? Was it a sign that the citizens of America are enjoying an illusion of solidity when the foundations of American society, her economy, and industry, have been eroded while the people have been sleeping?

I did not have any clarity on this and set the matter aside until I received an e-mail from a brother in Christ (thank you Carl) that provided an link to an update on this story. The recovery of these rare and expensive cars has begun this week and the first car to be recovered was a 2009 Corvettte ZR1 Blue Devil. 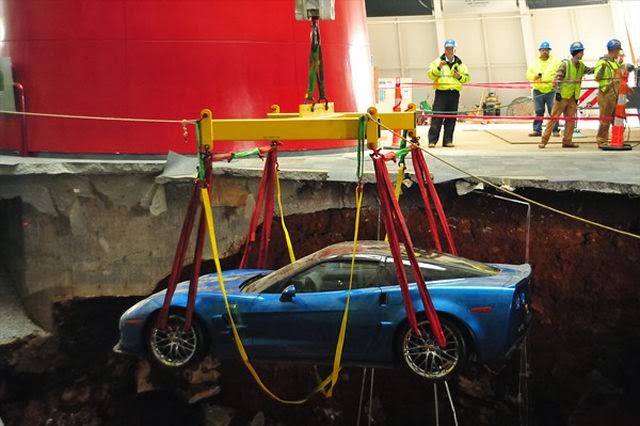 Blue Devil Rising from the Pit

The imagery evoked by a Devil coming forth from a pit in the earth certainly has an apocalyptic ring to it. In fact the book of Revelation, also known as The Apocalypse, includes a passage that describes locusts coming forth from a pit, and the locusts have as their king the angel of the abyss (pit) whose name in Hebrew is Abaddon and in Greek Apollyon.

Revelation 9:1-11
And the fifth angel sounded, and I saw a star from heaven which had fallen to the earth; and the key of the bottomless pit was given to him. And he opened the bottomless pit; and smoke went up out of the pit, like the smoke of a great furnace; and the sun and the air were darkened by the smoke of the pit. And out of the smoke came forth locusts upon the earth; and power was given them, as the scorpions of the earth have power. And they were told that they should not hurt the grass of the earth, nor any green thing, nor any tree, but only the men who do not have the seal of God on their foreheads. And they were not permitted to kill anyone, but to torment for five months; and their torment was like the torment of a scorpion when it stings a man. And in those days men will seek death and will not find it; and they will long to die and death flees from them. And the appearance of the locusts was like horses prepared for battle; and on their heads, as it were, crowns like gold, and their faces were like the faces of men. And they had hair like the hair of women, and their teeth were like the teeth of lions. And they had breastplates like breastplates of iron; and the sound of their wings was like the sound of chariots, of many horses rushing to battle. And they have tails like scorpions, and stings; and in their tails is their power to hurt men for five months. They have as king over them, the angel of the abyss; his name in Hebrew is Abaddon, and in the Greek he has the name Apollyon.

Interestingly, the Scripture reference containing the names of the ruling angel of the pit is Revelation 9:11. The number 911 is associated with disaster, calamity, and emergency services. Strong’s Concordance defines Abaddon as “a destroying angel.” Similarly Apollyon is defined as “a destroyer.”

There are some interesting links to pursue here. The first I would mention is that the word “Corvette” is the name of a type of warship that is somewhat smaller than “a destroyer.” I found the following information online.

Corvette: a highly maneuverable armed escort ship that is smaller than a destroyer.


Fast naval vessel smaller than a frigate. In the 18th–19th century corvettes were three-masted ships with square rigging and carried about 20 guns on the top deck. Often used to send dispatches within a battle fleet, they also escorted merchant ships. Early U.S. corvettes won distinction in the War of 1812. They disappeared as a class after the shift to steam power in the mid-19th century, but in World War II the term was applied to small armed vessels that served as escorts for convoys. Modern corvettes, usually displacing 500–1,000 tons (454–900 metric tons) and armed with missiles, torpedoes, and machine guns, perform antisubmarine, antiaircraft, and coastal-patrol duties in small navies.
[Source: http://www.merriam-webster.com/dictionary/corvette] 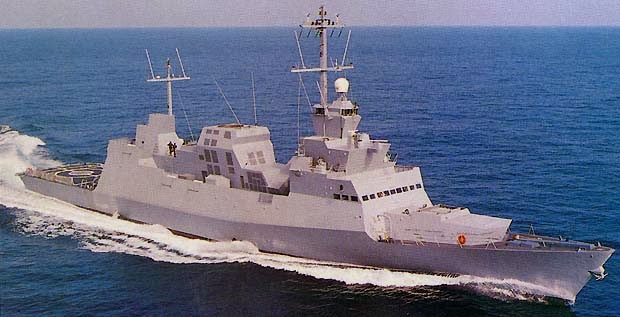 The Sa’ar 5 Corvette, Built in America for Israel

The automobile bearing this name is also small, fast, and highly maneuverable. Like modern corvettes in the navies of the world, it has a powerful engine to drive it at high speeds. These naval corvettes are instruments of warfare and destruction. They played a large role during the World Wars in protecting shipping from submarine attacks. Could the collapse of these Corvettes signify that the merchants of this world are no longer safe? There are many possible interpretations.

Whatever the significance of this sinkhole event is, destruction is certainly a part of it. Not only was the building in which the Corvettes were housed severely damaged, necessitating that it be closed to the public until very expensive repairs can be performed, but eight valuable automobiles, among the most valuable in the museum’s collection, fell into the pit. All received some damage, though the Blue Devil was in remarkably good shape when it was raised from the pit.

Another detail I would comment upon is that the automobile bearing the name Corvette is known for its powerful engine which is rated in horsepower. Horses are mentioned twice in the passage cited above from Revelation chapter 9.

The mention of horses prepared for battle evinces a connection to another story I recently posted on the Parables Blog. 2014 is the Chinese year of the horse, and recently the Denver Broncos football team were contending for the SuperBowl title. The Broncos quite naturally have a horse as their mascot, but even more telling is that Denver, the city they are located in, has a large, blue, demonic horse statue near the entrance to Denver International Airport. This statue is of such an evil and malevolent character that locals have nicknamed it Blucifer. 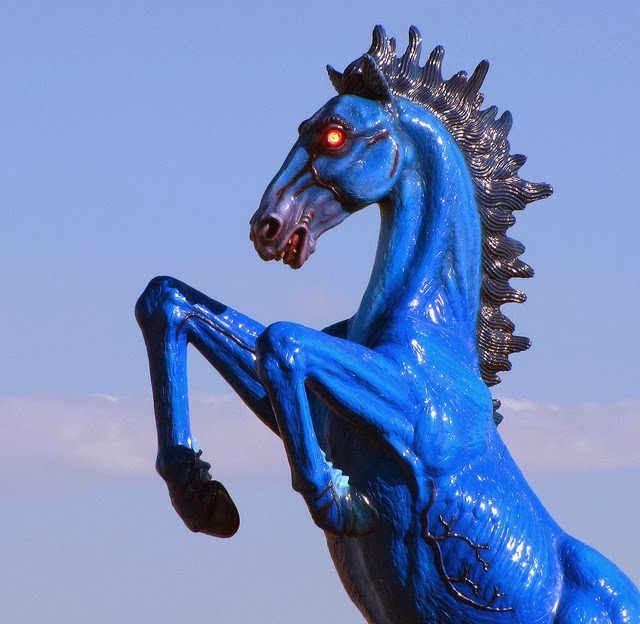 Another local nickname for this statue is DIAblo. DIA are the initials for the airport, and the word Diablo is the Spanish word for “Devil.” This statue, like the Corvette raised from the pit, is a Blue Devil.

Another symbolic detail that I noted as I looked into this story is that the Corvette Blue Devil car was marketed alongside images of the US Navy’s Blue Angels performance aircraft. Although some may see the words Devil and Angels as being opposites, this is not true. Satan is called the Devil, and he is a fallen angel. Not all angels are holy and benevolent. Some are wicked and malevolent. 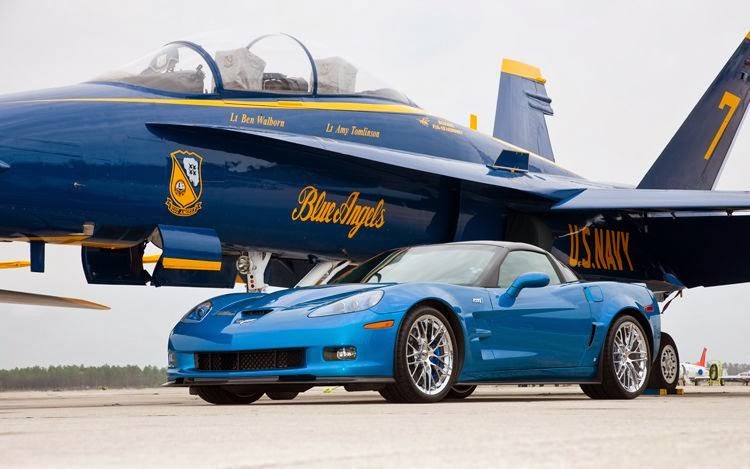 As I pondered the significance of the term “Blue Devil,” I was at once reminded of the association with Duke University. All of their sports teams for this university have a Blue Devil as their symbol. 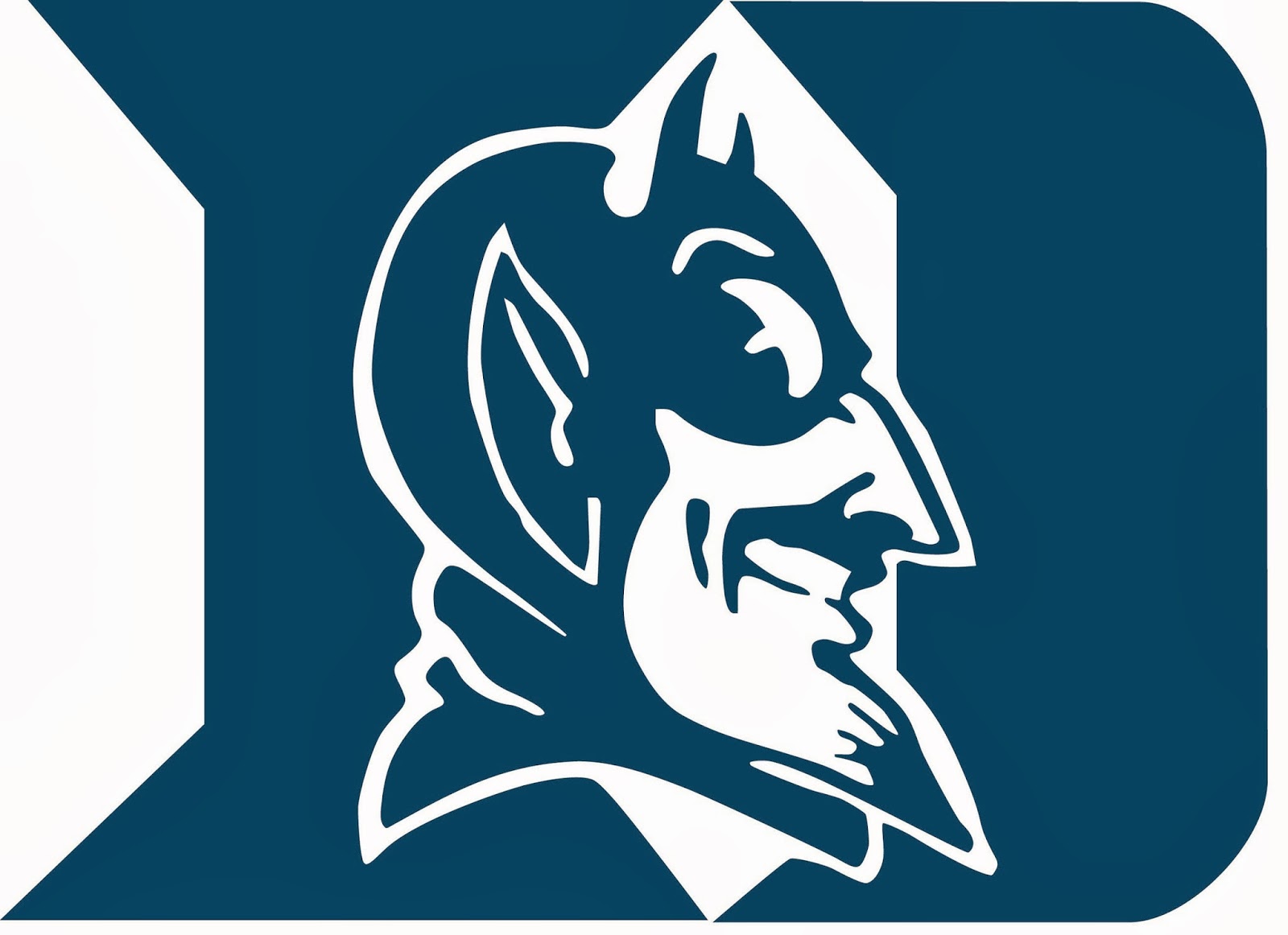 I was curious to discover the origin of this school symbol, so I did some research and found that Duke University adopted this name in honor of a French Army Corp that gained renown during World War I. The Chasseurs Alpins were a mountain infantry brigade that wore blue uniforms and gained the nickname “les Diables Bleus” or “the Blue Devils.” This brigade exists to this day, and

“They are trained to operate in mountainous terrain and in urban warfare.”
[Source: http://en.wikipedia.org/wiki/Chasseurs_Alpins]

The mention of urban warfare and its association with Blue Devils drew my attention. America’s military has been training for urban warfare for a number of years in anticipation of coming civil unrest that the powers-that-be have both foreseen and precipitated. America experienced a foretaste of the military invading their cities and confining citizens to their homes under a declaration of martial law as Constitutional rights were suspended and homes were searched without warrants in the aftermath of the Boston Marathon bombing. 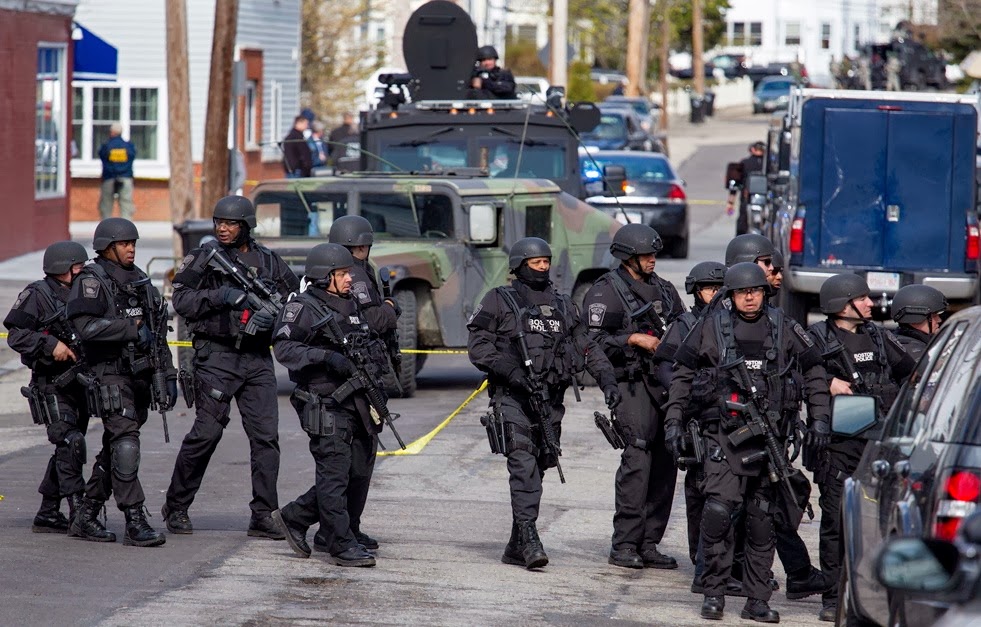 Not more than 15 miles from where I am located, a former missile plant originally owned by Northrop has been converted to an urban warfare and disaster training facility. It is complete with a fabricated city with streets, buildings, and everything needed to train both military and police agencies in the tactics of urban warfare.

During the London Olympics there was also symbolism during the Illuminati inspired closing ceremonies that featured an urban landscape and beings streaming forth from an underground pit. The entire ceremony was filled with occult symbolism. We live in dark days and Christians need to be prepared spiritually, having their lives and homes set in order.

On another note, I would notify readers that I am aware of the recent scandalous embrace of Kenneth Copeland Ministries and the Harlot of Rome. I watched the 45 minute video of the service where a former member of KCM introduced a video message from Pope Francis to the ministers attending a Kenneth Copeland conference. There was great deception present in the message as people were encouraged to forget about doctrine and truth and focus entirely on “loving” God and one another. A great evil occurs when men attempt to divorce truth from love. Truth without love leads to tyranny, while love without truth leads to apostasy.

Those who have not viewed the video where the Pope presents a message to the attendees of the KCM conference, can view it here: