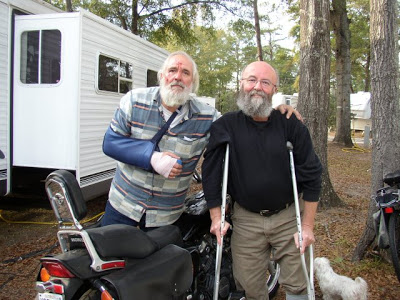 Many people have been writing to ask how my recovery is going. As most of you know, I was involved in a motorcycle accident September 6th in which my left foot was dislocated, my fibula (smaller leg bone) was severely fractured, and the bottom of the tibia (the larger leg bone) was chipped. I had two titanium plates affixed to the bone and more than twenty screws.

In one of the last updates I mentioned that I had to undergo a skin graft to heal up the wound where the compound fracture had occurred. The skin graft took well, and I was surprised at how quickly it healed.

About three weeks ago my bones had healed enough that I was able to start walking without crutches while still wearing a protective boot over my left foot and lower leg. About two weeks ago I began wearing a shoe on the left foot, instead of the boot, which has made walking much easier. I still have some swelling and pain after walking a distance. I can walk about half a mile right now, with my distance steadily increasing.

I am scheduled to go back to the hospital Wednesday February 1st to have three screws removed from my leg. These were intended to be temporary, and must now come out as they restrict motion between the tibia and fibula. The doctor said this is a very minor procedure that should only take about 20 minutes, though I will be at the hospital longer than this as they have to prep me and will put me to sleep for the procedure. I would appreciate your prayers for this final procedure to go well.

I am anticipating being released from the physician’s care not long after this. I will have a follow-up appointment two weeks later, but I do not anticipate any other surgical procedures or need for further medical intervention. I have continued to have very little pain with the injury, or recovery process. The grace of Yahweh has been abundant.

Regarding the photo at the top of the blog, it was taken about 7 weeks ago. Randy and Kathy Furman had come driven down from South Carolina to visit with me for the day. Randy is an old hand around motorcycles, having ridden them many years. He has done a lot of mechanical work on them as well. He asked if there was anything he could do to help me with the bike. By this time, I had fairly concluded that the Father would have me to sell it, but it needed a couple things done to it before I could do so. The clutch needed adjusting and the battery replaced. Randy graciously performed this work for me.

After getting the motorcycle cranking and shifting properly, Randy took it for a ride around the RV park. He had gone about 100 yards from my site, riding slowly. As I was watching him I saw him thrown off the bike. He had applied the front brakes, which may have been sticky from not being ridden for a while. At the same time he was on a curve, and there was some loose gravel on the road. The combination of factors ended up rather dismally. As you can see from the photo, Randy did not have a helmet on as he had not planned on leaving the campground. His right hand was broken in the fall.

Afterward, I had no peace about keeping the motorcycle. I sensed that it was time to sell it. Within 48 hours of posting it on Craigslist it had sold and was taken away. During this season I have been hearing from numerous other Christians who are experiencing various trials, many of which are physical. A number have even experienced broken bones, the most common involving either a foot or a hand. I am sure there are parables to be delved in these things, but I will not give an opinion of what they may be at this time.

Both Randy Furman and I are recovering well after being thrown from the same beast, and we are grateful for the grace of God.

A number of things have been occurring at this time that have a common theme. Having been loosed from my crutches, and being able to walk again, I have a new appreciation for such a simple liberty. Around the time that I was weaning myself off of the crutches, a sister in Christ sent me three silver coins. The coins bear a figure that is referred to as “Walking Liberty.” 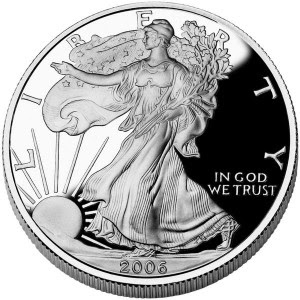 Two of the coins I received were dated 1989. As I received them in December 2011, they were 22 years old. That is a very common number in my life. All of our trials and experiences in life come from the Father’s hand with a purpose. He is ever working to cause us to come forth as purified sons in the image of Christ. Silver is symbolic of purity.

Zechariah 13:9
“And I will bring the third part through the fire, refine them as silver is refined, and test them as gold is tested. They will call on My name, and I will answer them; I will say, ‘They are My people,’ and they will say, ‘Yahweh is my God.’”

Before we pass through the purifying fires of God, our liberty often is detrimental to our spiritual well being. While we are carnal we often use our liberty to pursue fleshly desires and passions. As we embrace the cross and submit to those fiery trials the Father has appointed for every son and daughter, we are able to walk in liberty without harm. Our Father is seeking to teach each of us to use our liberty to serve one another, rather than as an opportunity to pursue fleshly desires.

Galatians 5:13
For you, brethren, have been called to liberty; only do not use liberty as an opportunity for the flesh, but through love serve one another.

A third thing that has recently transpired that fits into this theme relates to my bus. The bus has air brakes, and they have locked up while I have been parked here in the RV park. I discovered this just prior to my accident. It seemed in more than one way that Yahweh was indicating that I was to sit still for a season. My bus would not roll, and after the accident I could not walk.

As my foot has been healing and I have begun walking again, I began praying about God sending me a mechanic to help me get the bus on the road. I sensed that the Father would have me to entrust this matter to Him, and to not initiate any action in this regard. I wanted to know that it was the Father guiding and directing in this matter.

A few days after I prayed for God to send me a mechanic, Honesty, a sister in Christ, e-mailed me. I had not heard from her in about a year. She wrote to say that she and her husband Marc had been thinking about me. Marc is an excellent mechanic and he wanted to know if there was anything I needed done on the bus. I shared with them about the air brakes being locked up. Marc, Honesty, and their two daughters came down this past week-end and Marc quickly had the problem resolved. Sunday I rode with Marc as he drove the bus down the road and it is running very well.

The weather this past week has been unusually warm and pleasant. It seems like an early Spring. The daytime temperatures have been in the 70s. In many ways it seems like there is a promise of release and renewal.

Song of Solomon 2:10-12
Arise, my darling, my beautiful one, and come along. For behold, the winter is past, the rain is over and gone. The flowers have already appeared in the land…

To everything there is a time and a season. There is a time for sitting still and there is a time for setting forth. I sense that the changing of a season of my life is at hand. I am hoping at the end of February to be able to travel somewhat again. I will have been at the same RV park in Perry, Georgia for fourteen months. Fourteen is a number signifying transition.

Thank you for your prayers. The grace of God has been abundant even in a winter season, and during a period of injury and recovery. I am confident that the grace of God will continue to be abundantly supplied.


End Note: Following are links to two articles that were sent to me today. I found them very thought provoking.