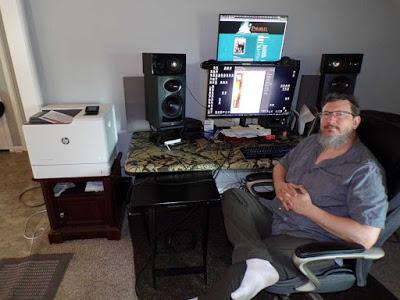 Our ColorQube 8880 finally died. It was a fantastic printer, and it had an extended warranty from Amazon. They always had to send Xerox out to repair it, but their repair was always done right. I figure I cost them about $2000 dollars in repairs, but over the years they quit making the printers and nobody else made a printer like theirs. Therefore I was back to a laser printer as the printer of choice. I knew that HP made a very good printer, so George and I looked for a capable HP printer. We found one that we liked. It was the HP M652. It prints color, both sides of the page, and is extremely quick. It prints 500 pages at a time and is rated at 14,000 pages a month. We currently print 8,600 pages a month for newsletters, so the printer is a good match.

Because this printer is rated so highly it is considered a business printer. The photo above shows George with the printer, and a newsletter in the tray. We could not imagine that it would print so fast. It is considerably faster than the ColorQube 8880. The toner cartridges are rated at 27,000 pages for the black, and 22,000 for the colors. These are phenomenal numbers. Far more than the cartridges I used to purchase for the HP 4. We will see how they are in comparison to the ColorQube solid inks we have been using after we have run it a while. 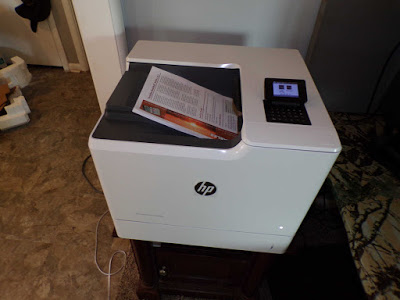 Not Your Average HP

The HP M652 comes with an economy setting that saves toner. We printed a newsletter out on the economy setting and we were amazed at how bright and sharp the pictures were. It was a tremendous improvement over the ColorQube, which we didn’t think was bad. What a blessing this will be for the inmates in prison to receive newsletters printed on this printer.

We had just started talking about this printer when a gift for $1,000 came in to pay for a new printer. This was about half the cost of the printer, and it was the largest gift that George had ever received for the ministry. It came from a man that I had not talked with in some years. We had e-mailed quite a bit, but he called just a couple of days earlier and I had mentioned our need for a new printer for the prison ministry. I had not thought about his giving any money at all, so I was surprised when George called and told me that he had given the money.

The Lord does take care of all the needs for the prison ministry. George was able to purchase some of the high capacity toner cartridges at the same time. The total came out to $3,364.53. This should last George for the next several months. It is wonderful to watch the ministry be supplied for. It is a much needed example of Yahweh carrying on a ministry. If Yahweh calls a man to a ministry, He will keep it running as long as possible. The hundreds of men in prison are not able to send any money to receive the newsletters. It takes men like George, and men and women like you, to keep the prisoners receiving the newsletters. 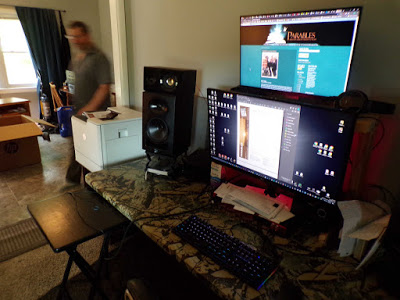 I wish to thank you for all you have done since I have had to step back from the prison ministry after having my stroke almost 4 years ago. George and I live right next to each other, and he has generously agreed to stay in the rented home until my daughter gets back. I continue to take care of the Parables Blog. Thank you Father for all your help, and the help of your faithful ones.