I was blessed this past Saturday to be paid a visit by Joe Boes, a brother from the Atlanta area, and Randy Simmons and Veronica Jones from Macon who both minister among the people on the streets there. It was a good time of fellowship, and my daughter Kristin joined us for lunch.

I had spoken to Randy the previous day and he told me about something out of the ordinary he had come across. There is an old store front in downtown Macon that is partly utilized as a church. Randy stopped by there last week as a number of homeless and other street people frequent the location which is open to the public. In one part of the same building there is an art gallery.

Randy walked over to look at some of the paintings and was surprised to find some by a local artist that had a prophetic theme to them. One image in particular alluded to the judgment of America as her money fails her and the economy collapses. 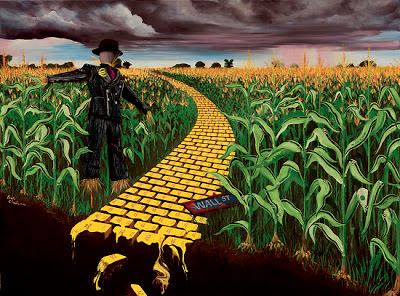 End of the Road – by Beth Smith

I find it interesting that this painting was done prior to all the recent talk of America facing a “fiscal cliff.” There is an abyss in this picture into which the wealth of the country is falling, and a Wall Street sign, bloodied, and lying on the vanishing bars of gold.

If you look closely at the details of this painting you will see words written on the leaves of corn that are taken from America’s money. Various monetary denominations are listed. In America it seems that money springs forth from the ground like corn. This is a rather apt analogy since the Federal Reserve creates seemingly endless amounts of money out of nothing. It is further significant that the United States experienced severe drought in recent years. America’s corn crops have withered and diminished in a parallel to the wealth of her citizens.

You will also notice there is a scarecrow in the forefront of the picture. He is wearing an Euro emblem on his lapel, the symbol of the European monetary union. The scarecrow is dressed in far better array than is common. He is wearing a rich looking suit with tie and hat. A scarecrow is an interesting symbol to link to the world monetary system. It is basically an empty suit, a term at times employed to describe the soulless bankers and money changers from Wall Street, Fleet Street, and elsewhere. The world money system employs as much fakery and deception as is found in a scarecrow. It also employs fear to keep men and women in subjection. The populace is told to keep their money in the banks where it is safe, causing mankind to become dependent upon a financial system controlled by workers of iniquity.

One prominent feature of this painting is the storm clouds approaching, and the rain in the distance. A storm is truly coming to America and Europe and it will effect all mankind.

You can understand why Randy was surprised to come across this painting in this building in downtown Macon. There was some writing near the painting stating the artist’s name, which also included a statement by the artist. She made reference to painting those things God gave her to paint. She was putting down with brush and paint those visions given to her. The message of God bringing judgment to America, and of impending economic collapse, is not a popular message among Christians. It is rarely spoken of in the churches, and that is certainly true in Macon, Georgia. It is a rare experience to encounter someone else locally who is hearing similar things from the Father.

Randy had snapped a photo of two of the artist’s paintings and told me he would show them to me when he came to visit. I asked him if possible to get the name of the artist, and see if a website was listed. Happily, he was able to find this information and I was led to visit Beth Smith’s site where her artwork is displayed.

While viewing the images of her artwork I was intrigued by another painting there. 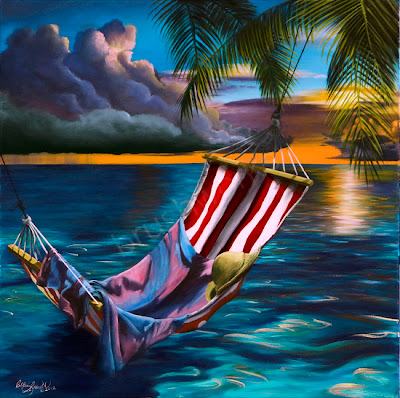 When the Sun Goes Down – Beth Smith

I see in this painting images that further speak of the condition of America. The hammock in the foreground bears red and white stripes, just like the U.S. flag. A hammock speaks of a people who are at ease, yet the location of the hammock is quite unusual. It is suspended precariously over the water. As the title of the piece reveals, the sun is setting. The sun is also setting on America as a constitutional republic. Her freedoms are daily being removed by acts of Congress and Executive Orders from the President. The wealth of America is rapidly being stripped from the land.

It seems fitting that no one is figured as lying in the hammock, for the comfort and security Americans once took for granted has left millions with a very unsettled feeling that something dreadful is about to happen. Further supporting this conclusion, we once again see storm clouds and distant rain in this painting. The hammock is positioned in a very perilous place to endure such an onslaught.

Yahweh has used other images involving water to prophesy of those things coming to America. The U.S. Airways jet that abruptly lost all power when striking birds, causing the pilot to perform an emergency landing in the Hudson River, provides a striking image of things to come. 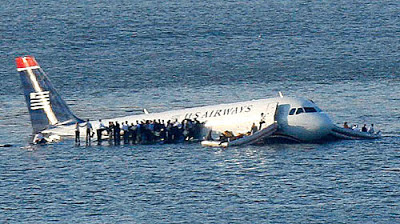 U.S. Airways – Standing on the Wings

Many of the passengers onboard were employees of the banking industry. The flight was heading from New York City to Charlotte, North Carolina which is another major banking hub and the corporate headquarters of Bank of America. The passengers aboard the plane all survived, but they escaped only with the clothes on their backs. Women even had to leave their purses behind. All of these things are symbolic of those experiences which are coming to America. America is being stripped of her wealth even as the gold bars are figured as dropping into an abyss in the painting by Beth Smith.

Hurricane Sandy provided another prophetic parable of that which is coming to America. It is highly unusual for a Hurricane to follow the track of Sandy. It did its greatest damage in an area from Washington, D.C. to New York City. The Manhattan transportation system was shut down. Wall Street had to close due to the storm, and once again we see that a loss of power was a major component of the event. Sandy knocked out power to 80 million people. Over a month later there are some people, particularly on Long Island, who are still left without power.

The parable of a storm coming to America that will leave her powerless, shut down her transportation system, cause a banker’s holiday, and leave millions scrambling to provide for basic necessities, is a palpable one. Even the name Sandy evokes an association with Christ’s parable of the man who built his house upon the sand.

Matthew 7:26-27
“And everyone who hears these words of Mine, and does not act upon them, will be like a foolish man, who built his house upon the sand. And the rain descended, and the floods came, and the winds blew, and burst against that house; and it fell, and great was its fall.” 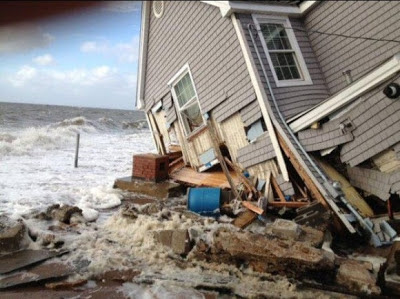 The home pictured above is emblematic of the fate of America. Her people have failed to listen to, and obey, the words of Christ. The nation has chosen abominations over righteousness. Fittingly, they have chosen a man named Obama to lead the nation. They have done this after four years in which he has proven that he is a staunch supporter of the false religion of Islam, an ardent promoter of homosexual deviance, a champion of abortion, a proponent of globalism, and a faithful servant of the New World Order.

Obama promised CHANGE to Americans during his first presidential campaign, and he promised RUIN in the second. (For an explanation, see the following post.)
https://parables.blog/2012/11/thirteen.html

The New World Order can only arise after the old order has collapsed into RUIN. These things are coming swiftly. The Spirit of Christ is declaring this message whether through the artwork of an anointed artist, or through world events.

Disclaimer: The artwork of Beth Smith is shown here by permission of the artist. Please seek her permission before re-posting. The interpretations of her artwork are my own. The artist has not provided any commentary on the paintings other than stating that the visions she paints are from God.