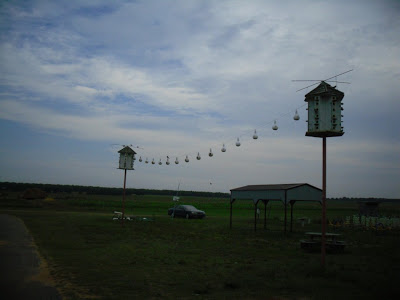 Purple Martin Sanctuary
(Click on any image to enlarge)

There is a u-pick strawberry patch about 4 miles from where I am camping in my bus, so two days ago I decided to ride my bicycle over there to get some strawberries to eat with my oatmeal in the mornings. It was a nice ride through the country and the morning was very pleasant. I found that the owners of the farm market had erected this very nice housing project pictured above for purple martins. You see quite a lot of purple martin houses in Georgia, but I had not seen one quite like this before. 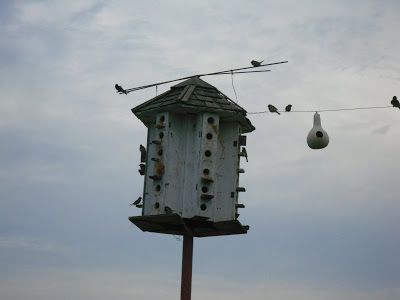 As you can see, this bird house had a high occupancy rate. I don’t know if there were any vacancies.

I picked enough strawberries to fill up my freezer. I rode them home on my bike. Fortunately, the roads were smooth so the strawberries didn’t turn to mush during the bike ride. I washed them, cut them up, and put them in freezer bags. 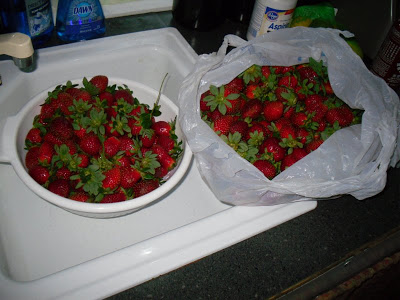 Strawberries in My Sink

As a pre-teen growing up in Oregon, my parents gave my older sister and I the option of picking strawberries or raspberries during the summer when we were off from school. There were local berry farms that needed laborers to do the picking. It was actually nice to have something to do where I could earn some spending money. It took me only one day of picking strawberries, bending over all day, for me to decide that I much preferred picking raspberries. Raspberries grown on bushes from about waste high on up. We would tie a coffee can around our waist and fill it up. When it was full we would dump the contents into a flat and take it up to one of the employees who would weigh it and pay us a price per pound. 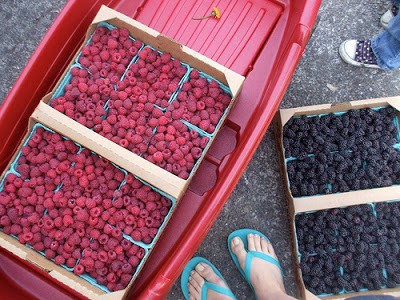 This flat of raspberries looks very much like the ones I filled up when I was a kid. Raspberry bushes don’t have thorns (people ask me that frequently), and because you can pick them standing up I opted for picking them instead of strawberries. I don’t mind picking strawberries for myself. It only took about 30 minutes to pick the bunch shown in my sink in the picture above. Doing it all day is hard on the back.

Speaking of my back, it was sore yesterday after I spent all day working on hooking up hot water to my shower in the bus. I installed a shower when I first outfitted the bus. I have been living in the bus for 17 months now, and have never used the shower as I did not have hot water. I mentioned back in August of last year that I had purchased a tankless hot water heater. It is highly efficient, heating the water as it flows through. The volume is quite enough for a good strong shower. I actually have to set the temperature all the way down to keep it from getting too hot.

The water heater has to be mounted outside as it runs off of propane and needs to vent. I had thought of attaching it to the rear of the bus, but there wasn’t a suitable place to put it where it would not be in the way. I decided to wait until I got a new trailer and to mount it on the front of the trailer, running hoses between the trailer and bus to supply the water to the shower. 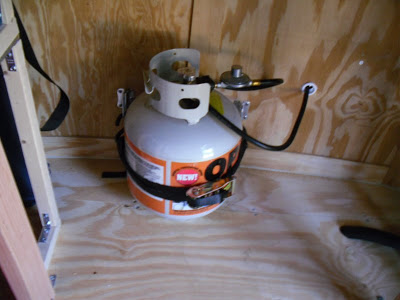 I mounted the propane tank inside the trailer. It sits under the counter top that my grain mill is mounted on. The tank is strapped to the wall so it won’t move around when I am traveling. I drilled a hole through the wall and dressed it out with grommets to keep from wearing on the gas line. This one small tank should be sufficient to heat water for my shower for an entire year. 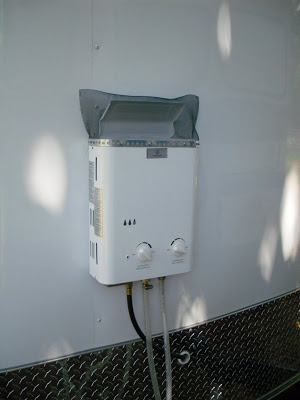 Outside View of Hot Water Heater

The unit doesn’t look bad on the front of the trailer. It sort of reminds me of one of the refrigerator units you see attached to the front of a trailer on a tractor trailer rig. The difference is mine heats water and theirs keeps their cargo cold. You may notice the screen over the top of the water heater. I added the screen to keep leaves and other things from falling into the top of the unit. I don’t know why they don’t ship a screen with it. 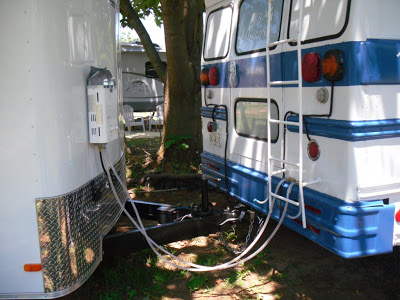 The above photo shows the unit all hooked up and in service. There are two water lines running from the bus to the water heater. One supplies water going into the heater and the other sends the water back to the shower. Because the shower is at the very back of the bus, right above where the water returns from the heater, hot water begins to flow almost immediately when the shower is turned on.

When you use this type of unit you do not mix hot and cold water in the shower. The water temperature is adjusted with a dial on the water heater. You only have to turn one faucet on in the shower and water flows at the temperature you have preset.

Mercifully, there was a hardware store near the campground. I made five trips there and back on my bicycle yesterday as I kept discovering that I needed something else to complete the job. Plumbing is one of the least enjoyable tasks for me. I have to steel myself to tackle a plumbing job. Once started however, I did not want to quit until I was done. My last trip to the hardware store (about 1-1/2 miles round trip) was about 6:15 P.M., just 15 minutes before they closed. My doggedness paid off, however, as I was able to take a shower in my bus for the first time.

One nice thing about this set-up is that I can take a hot shower anywhere, even parked at a rest area, or in some place where I am off the grid. Water comes either from a city water connection, or from my potable water holding tank which operates off of auxiliary batteries. The water is heated by propane, so I don’t need an outside electric connection. I was elated to get this project completed as it has been on my to-do-list ever since I first converted the bus to an RV.