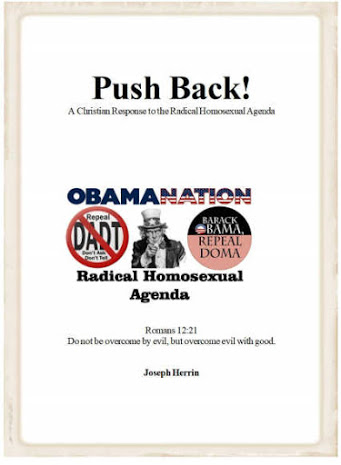 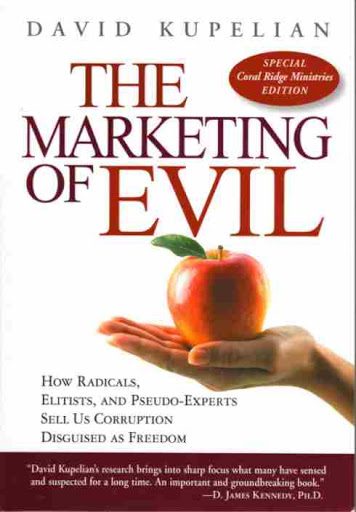 One aspect of the global push for homosexual normalization in which the truth is largely unknown is that the campaign to champion “gay-rights” is NOT a grass-roots movement. It is often difficult to bring Christians to the realization that the media in America, and across the world, is controlled by a cabal of global elites who are servants of Satan.
Growing up in America in the 1960s and ‘70s, I heard a great deal of condemnation of the propagandistic, state-controlled media in communist nations, particularly the Soviet Union. I was made to understand that the press in communist nations was rigidly controlled, that it did not permit dissenting opinions, and that news was reported in such a way that it always served the aims of those in positions of power.
I remember thinking as a youth that surely everyone in those nations must realize that the media is state-controlled, and that they must disdain what is reported as biased and lacking truth. I could not imagine citizens of communist nations taking the reports in the press seriously. I imagined that men and women had to be truly blind, or exceptionally naive, to give credence to what was reported in the state controlled media.
The great subtlety of Satan was such that failed to consider that the media in America was equally biased, and existed to serve the ends of those in positions of power. The mantra that America is a free nation with a free press was so pervasive as I was growing up, that I accepted this as truth. It never occurred to me that America was just as thoroughly propagandized as Russia, or some other despotic communist regime.
In the recent series titled Dragon Flood, I shared the following information.
—
A moneyed elite found it possible to control the climate in which attitudes are formed, and actions are birthed. By control of the media and the governments of nations, they are well positioned to not only set the agenda for public discussion, but to define the limits of that discussion. They dictate the conversation and choose the subjects of public debate.
In 1983, 50 corporations controlled the vast majority of all news media in the U.S. At the time, Ben Bagdikian was called “alarmist” for pointing this out in his book, The Media Monopoly. In his 4th edition, published in 1992, he wrote “in the U.S., fewer than two dozen of these extraordinary creatures own and operate 90% of the mass media” — controlling almost all of America’s newspapers, magazines, TV and radio stations, books, records, movies, videos, wire services and photo agencies. He predicted then that eventually this number would fall to about half a dozen companies. This was greeted with skepticism at the time. When the 6th edition of The Media Monopoly was published in 2000, the number had fallen to six. Since then, there have been more mergers and the scope has expanded to include new media like the Internet market.
In 2004, Bagdikian’s revised and expanded book, The New Media Monopoly, shows that only 5 huge corporations — Time Warner, Disney, Murdoch’s News Corporation, Bertelsmann of Germany, and Viacom (formerly CBS) — now control most of the media industry in the U.S..
[Source: http://www.corporations.org/media/]
—

Media Consolidation
(Click on Image to View Larger)
The actual state of the media control is worse than the images above reveal. All of these major media corporations have interlocking relationships as men and women who serve on the board of the companies in one group also serve on the boards of corporations from other groups. The entire world has fallen under the sway of a global corporatocracy.
The phrase “Interlocking Directorate” describes the practice of global corporations to place directors from one company on the board of another company to increase power, coordination, and influence of the businesses joined in this way. This leads to a high level of coordination between companies, which explains why there are thousands of individual media companies that all run the same stories. These corporate directors are not the true powers behind the scene. They are the appointed ambassadors of a smaller group of global elite. These new world order ambassadors/corporate directors carefully guide all of the amassed media entities under their sway, causing the public to place their focus upon whatever subject is determined by the powers that be.
The appearance of conflict between media companies like Fox News, MSNBC, and CNN are carefully controlled ruses. The global elite carefully select both sides of an argument so that any free thought that is in opposition to their goals will be excluded. It is much like the charade carried on by the Democratic and Republican parties during elections. In the most recent presidential contest, the only candidate that presented a view contrary to the global elite was Ron Paul. The media made a point to marginalize Ron Paul, downplaying his support, characterizing him as “unelectable,” and removing all mention of him from articles that made mention of those who stood as frontrunners.
The candidates who did receive favorable attention were all handpicked servants of the global elite. The following video reveals the manner in which the media controls thoughts by framing a debate, excluding those people who are free thinkers, and eliminating all debate that threatens the global aims of the ruling powers.
http://youtu.be/qtDJ6Ay4QMw
Those with any integrity can clearly see that the policies of the U.S. government did not change at all when the Republican President George W. Bush was replaced by the Democratic President Barack Hussein Obama. Despite many campaign promises that things would be different, America has seen more of the same. The media portrayal of substantive differences between the chosen candidates of the two major parties is a scam to deceive the gullible. Both parties are controlled by the financial powers of a global elite.
In his book titled Propaganda, published in 1928, Edward Bernays wrote:
The conscious and intelligent manipulation of the organized habits and opinions of the masses is an important element in democratic society. Those who manipulate this unseen mechanism of society constitute an invisible government which is the true ruling power of our country.
We are governed, our minds molded, our tastes formed, our ideas suggested, largely by men we have never heard of. This is a logical result of the way in which democratic society is organized…
Whatever attitude one chooses toward this condition, it remains a fact that in almost every act of our daily lives, whether in the sphere of politics or business, in our social conduct or ethical thinking, we are dominated by the relatively small number of persons – a trifling fraction… who understand the mental processes and social patterns of the masses. It is they who pull the wires which control the public mind…
The control of the vehicles of thought has become increasingly aggregated in the hands of a few. As the infographic previously displayed in this article states “6 media giants now control 90% of what we read, watch, or listen to.” This number has since declined to 5 media giants, and each of the five have interlocking relationships. The following graphic is taken from a Wikipedia article.

[Source: http://en.wikipedia.org/wiki/Interlocking_directorate]
(Click on image to view larger)
The above graphic shows men and women who serve on multiple corporate boards. Yet, the connections are far more extensive when one adds membership in multi-national guidance groups such as the Council on Foreign Relations. It is at the meetings of these elite organizations that the policies to be promoted by the individual members are disseminated. 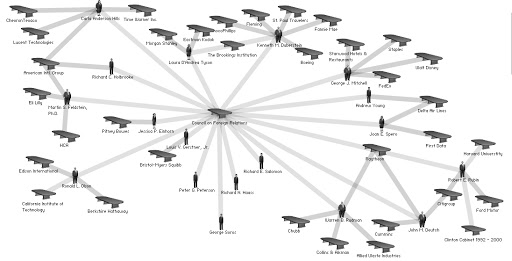