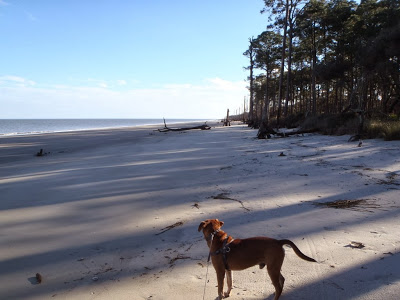 Champ on the Beach, Jekyll Island, Georgia
(Click on any image to view larger)

My time on Jekyll Island is drawing to a close. I will be pulling up stakes and returning to Central Georgia on February 1st. Champ and I have about two weeks left here. It has been a memorable, and pleasant time, notwithstanding my bicycle wreck and broken ribs. There was grace even for that experience, and it seemed to have passed quickly. Yahweh was very kind to permit me these four months here at the Jekyll Island Campground. He knows that I enjoy the peace and solitude of the island and find much delight in riding the bike trails. Champ also seems to find island living suitable.

I thought I would share a few photos from my time here on the island. You can get a sense of the serenity of the island from the photo above. It is taken from close to the extreme north end of Jekyll Island looking south. The Atlantic Ocean is lapping gently against the shoreline. I would like to allow Champ to run free on the beach, but the entire island is a state park and there is a leash law for pets. 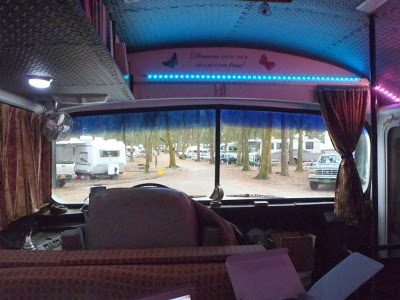 The View From Where I Sit

I will provide a pictorial view of a course Champ and I have walked a number of times since we have been here. It begins at the campground. The photo above is taken from my dining table in my bus. The table also serves as my desk. It is where I do all of my writing. I can look out my front window and see a portion of the campground and watch people go by, many of whom are walking their dogs. 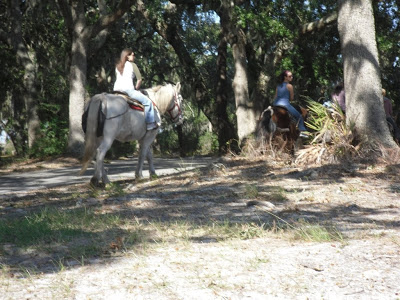 Directly across from the entrance to the campground is a road that leads down to the fishing pier. The road is bordered by Live Oaks that are heavy with Spanish Moss that hangs from the branches. We walk past Clam Creek, and a paddock where horses are kept to offer visitors horseback rides on the beach. Champ has lots of scents to stop and sniff along the way. It is about 3/4ths of a mile from the campground to the pier. 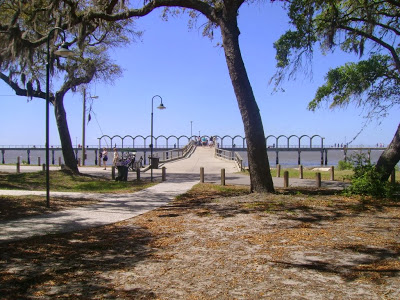 If you turn right just in front of the pier, you can either access the Clam Creek bike trail, or get on the beach. Champ and I have done both. I will show you our walk along the beach. The pier is not on the Ocean. It is located on the north end of the Island on a body of water known as the St. Simon’s Sound. From the pier you can look west and see the city of Brunswick and the majestic Sidney Lanier Bridge, or you can look north and see St. Simon’s Island.

After getting on the beach by the pier, you initially begin walking north, but after a few hundred yards you are at the very northern point of the island and begin walking east toward the Atlantic Ocean. After about 3/4ths of a mile you are on the Atlantic side of Jekyll Island and turn south. There is about 8 miles of beach along the Atlantic. At high tide there are sections where the beach is completely covered by water, but when the tide is out a person could walk, or bike the entire length of the island. On this walk Champ and I only go about 2 miles south, where we exit and return to the campground. This gives us a walking loop of about 4 miles. 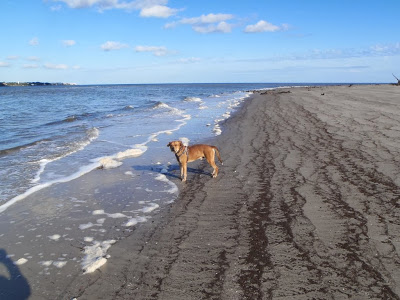 The sudsy looking stuff on the beach is not due to pollution. It is the blown spume that gets whipped up from the water on a breezy day. Whenever I see spume on the beach I am reminded of the poem Sea Fever by John Masefield. When I was in sixth grade I had to memorize this poem and recite it before the class. It is probably the only reason I know what spume is.

Sea Fever
By John Masefield
I must go down to the seas again, to the lonely sea and the sky,
And all I ask is a tall ship and a star to steer her by;
And the wheel’s kick and the wind’s song and the white sail’s shaking,
And a grey mist on the sea’s face, and a grey dawn breaking.


I must go down to the seas again, for the call of the running tide
Is a wild call and a clear call that may not be denied;
And all I ask is a windy day with the white clouds flying,
And the flung spray and the blown spume, and the sea-gulls crying.


I must go down to the seas again, to the vagrant gypsy life,
To the gull’s way and the whale’s way where the wind’s like a whetted knife;
And all I ask is a merry yarn from a laughing fellow-rover,
And quiet sleep and a sweet dream when the long trick’s over.

I guess I have felt the allure of the sea ever since learning that poem many years ago. At times I wonder what it would be like to work as a seaman on an ocean going vessel. Champ and I saw one such vessel gliding by us as it was leaving the port of Brunswick, traversing the St. Simon’s Sound on its way out to the Atlantic. 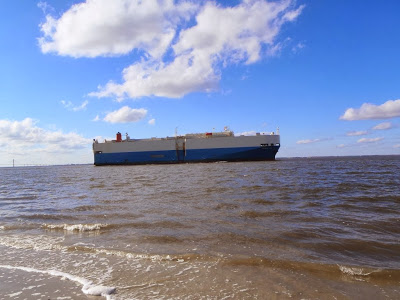 I was walking down the beach and noticed that Champ had stopped. He was staring out at the water, so I turned to see what he was looking at. Just a few hundred yards off the shore was this large vehicle transport ship gliding swiftly, and quietly by. The ships offload cars in Brunswick then go to pick up some more. 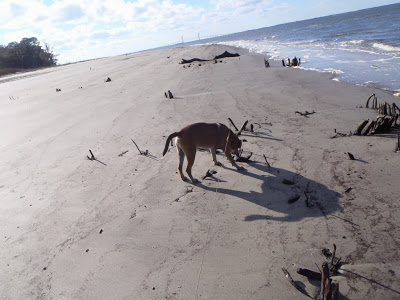 Champ Near Where We Saw the Polaris Ace

After we made it around to the Atlantic side of the island, Champ began discovering mysterious creatures on the beach. He is wary of things he doesn’t recognize, and approaches with great caution. 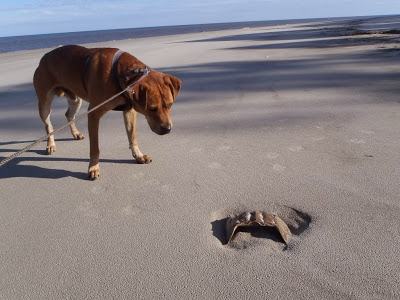 Champ and the Shell of a Horseshoe Crab 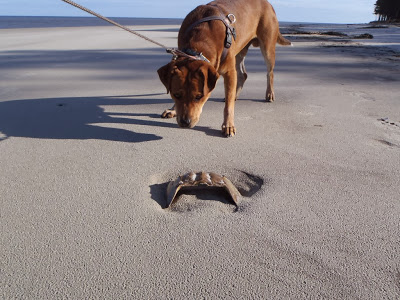 Getting a Little Closer

As we walked a little further along, we also came across a blue crab on the beach. It wasn’t alive, but Champ wasn’t taking any chances. 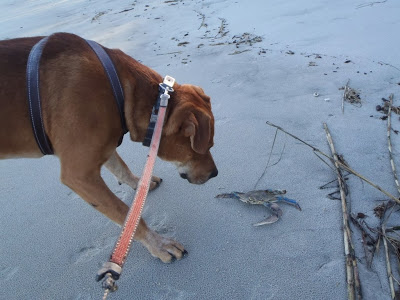 Champ and the Blue Crab

About a mile south on the Atlantic side of Jekyll Island one comes to Driftwood Beach. This is the most scenic beach area on the island. Storms and tides have eroded the ground in the maritime forest that borders the beach. As the soil was washed away some of the trees were no longer in the forest, but found themselves on the beach. It is an unusual spectacle to see pine and oak trees standing upright in the middle of a sandy beach. The roots of the trees have been laid bare, like fingers trying to maintain a hold upon the earth so they can remain upright. It is a very intriguing sight to behold and I never get tired of it. 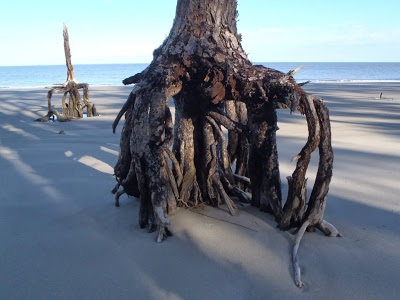 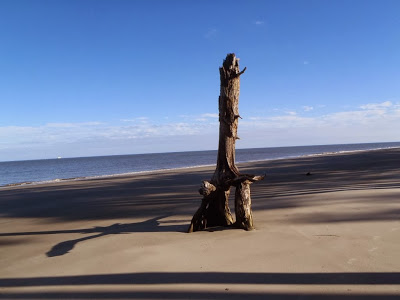 As the beach walker progresses southward they begin to spot an isolated tree here and there. Some have toppled over and they seem fairly well preserved, evidently due to the salt in the water. Some are polished smooth from wave action. Proceeding further south the trees on the beach become more numerous until you have to wend your way through them as if finding your way through a maze. It is an odd sight to see so many trees with no soil grass, ferns, or other plants around them. The ocean has stripped all away leaving this portion of the island forest exposed and lonely on the sandy beach. 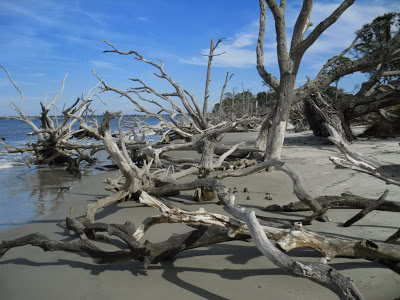 It’s a lot of fun riding a bike down this section of the beach, weaving in and out among the trees. I haven’t take my Catrike on the beach, and don’t intend to, as I don’t want to get salt water on the chain and cables. Salt water and steel produce rust almost instantly, so I have used only one bike on the beach and I rinse it off with fresh water afterwards.

The island has not changed much in the years since I first visited at the age of 16. Bike trails have been added, and in the last decade the old convention center was replaced with a new one. Groundbreaking took place about a month ago for a new shopping center to replace the 1960s era strip shopping center that was torn down about five years ago.

The photo below shows me sitting on the Jekyll Pier in 1984 when I was 23 years old. I will save you the trouble of doing the math. I am 52 years old now. 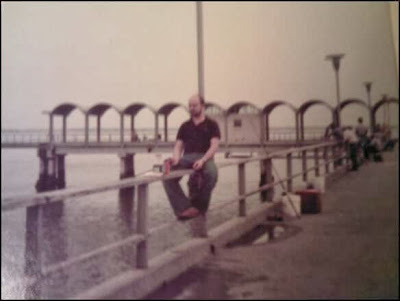 The image quality is not very good as this was taken as a snapshot of a printed photograph. They did not have digital cameras in 1984.

Champ and I look to make the most of our last two weeks here on the island, then The Dreamer bus must pack up and follow the pillar and the cloud to our next resting spot.