Rolling with the Times 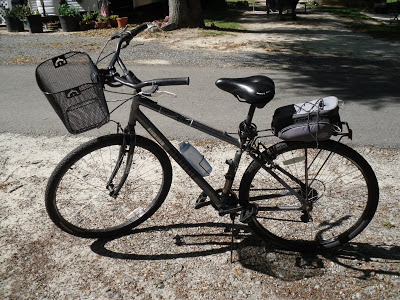 A number of people have indicated that they like the personal posts I put up on this blog, keeping them abreast of my whereabouts, the progress on my bus conversion, and other various details of life. I don’t entertain too many guests these days, nor am I involved with a local community of believers, so I enjoy sharing these things with my brothers and sisters who are part of my Internet family.

I decided against traveling down to Jekyll Island this month. Their winter rates at the RV park there ended at the start of April, jumping from $450 a month to $200 a week. Another reason I chose not to go at this time is that I had some further things I needed to do to my bus before taking it down the road further. I sensed that I needed to wait for the Father to give me a green light to travel, and I did not sense it at the time. So, I remain camped here in central Georgia at the Fair Harbor RV Park. The monthly rates here are excellent. It is only $325 a month, including water, electric, sewer and wi-fi. The campground also has bath houses and a laundry facility.

I mentioned a couple weeks ago that I sold my van. Until I can get some form of small powered transportation, I have been using my bicycle to get around town. I added a basket to the front of the bike this morning. I rode over to Walmart, which is about 2 miles from the campground, and found one there. I decided I better get a basket. I tried strapping a gallon of milk to the back of my bike, on top of the tool kit, a few days ago. The milk fell off as I rounded a corner and the top popped off the jug, spilling about a third of the gallon on the ground. As the saying goes, “There is no reason to cry over spilled milk.” It did seem prudent, however, to make provision so that it would not happen next time. Randy Simmons suggested the basket idea to me, and I was pleasantly surprised to find one at the local Walmart.

Two years ago on my trip across the country, a brother in Christ, Jim Bean, gave me a Leatherman multi-tool, which I carry in the tool pouch on the back of my bicycle. If you are not familiar with these tools, they are wonderful. They are an all in one tool, with pliers, knives, screwdrivers, saw, scissors, file, can opener, and radiation detector all built in. (Okay, I was kidding about the radiation detector. That will probably be added to future models.) 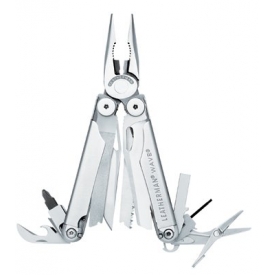 I was able to mount the basket on the bike using this handy tool before even leaving the Walmart parking lot. It was a gorgeous morning for a ride. It was rather windy, but the temperature was wonderful, the high being forecast for 76 degrees today. We have already had a day or two hit 90 degrees here, but 70s and 80s are more normal for this time of year. I have considered the grace of God being revealed in that I was led to sell my van and ride my bike at this time of year when the weather is so pleasant. I have already made about a half dozen trips into town on my bike, usually riding 5-6 miles at a time. I have been accustomed to riding my bike 14 miles a day when on Jekyll Island, but it is very flat ground there. I have hills to go up and down here, so it is a pretty good work-out.

I have been looking into purchasing a gas powered scooter. This would give me transportation to go a bit further when I have my bus parked at some location. I like the idea of a scooter because I could mount it on the bus using a motorcycle carrier when traveling, rather than having to tow a vehicle. Also, they get about 80-90 mpg on fuel, which is a big plus these days. I filled up the 50 gallon gas tank on the bus about two weeks ago, and it took $157.11 to top it off. In contrast, most scooters have a gas tank no bigger than 2 gallon capacity.

For those who are not sure what a scooter is, I will include a picture of one below. 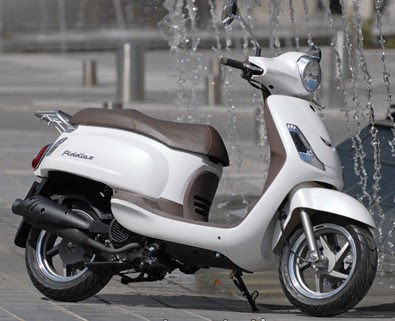 I actually saw this exact model in the campground two days ago. An RVer had it mounted on the back of his motorhome. The 150 cc to 250 cc models will travel at highway speeds, and a storage box can be added to the rear for carrying groceries and small items. For now, however, I am enjoying my bicycle. The motor on my bicycle needs frequent re-charging, but a plate of lima beans, rice and corn bread do just fine in the tank.

I have driven the bus twice since selling my van, taking it around town. I found out how much I missed a view out the back window. My campsite is a back-in site, and I have no view behind the bus. I have had to back up a few feet, then get out and walk to the back of the bus to look around, climb back in, back up a few feet further, then get out and look again. I repeat this about 4-6 times to back into my site. So, I decided to add a wireless back-up camera to the bus. They have come down tremendously in price. I was able to pick one up on sale for less than $100 at a local auto parts store.

I had to wire up a twelve volt outlet for the monitor near the driver’s seat. The camera and transmitter wired up to 12 volts at the rear of the bus. It works great. Now I can see what is behind me. 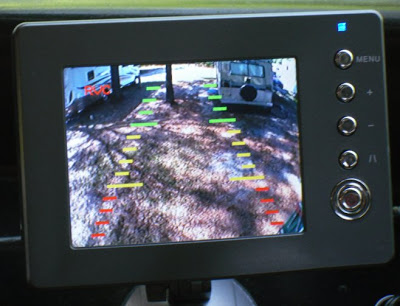 Actual View Behind My Bus

I also mounted my step ladder to the rear of the bus. With the roof being over ten feet from the ground, a step ladder comes in handy. 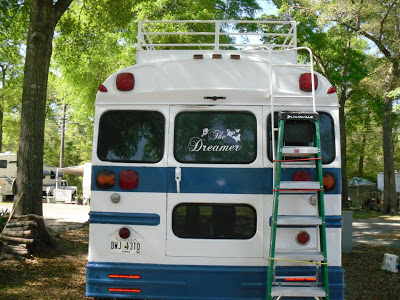 You can see the back-up camera mounted over the door. Randy told me I should have bought a blue step ladder to match the bus’ paint job. I agree that it would have looked better, but green was all that Walmart had in stock. The step ladder is resting on mounts at the bottom. Bungee cords hold it in place the rest of the way.

I just ordered a white, heavy-duty tarp to cover the storage area atop the roof at the rear of the bus. The area atop the roof will be ideal for carrying things, and may alleviate the need to tow a cargo trailer. I already have a considerable number of the large plastic storage totes, and they will ride very well on the roof. I will cover them with the vinyl tarp which will keep everything dry and in place.

The roof deck was added by the previous owners so they could sit on the roof while parked in the infield of the Atlanta Motor Speedway to watch the NASCAR races. It is very solid, and will hold a lot of material. 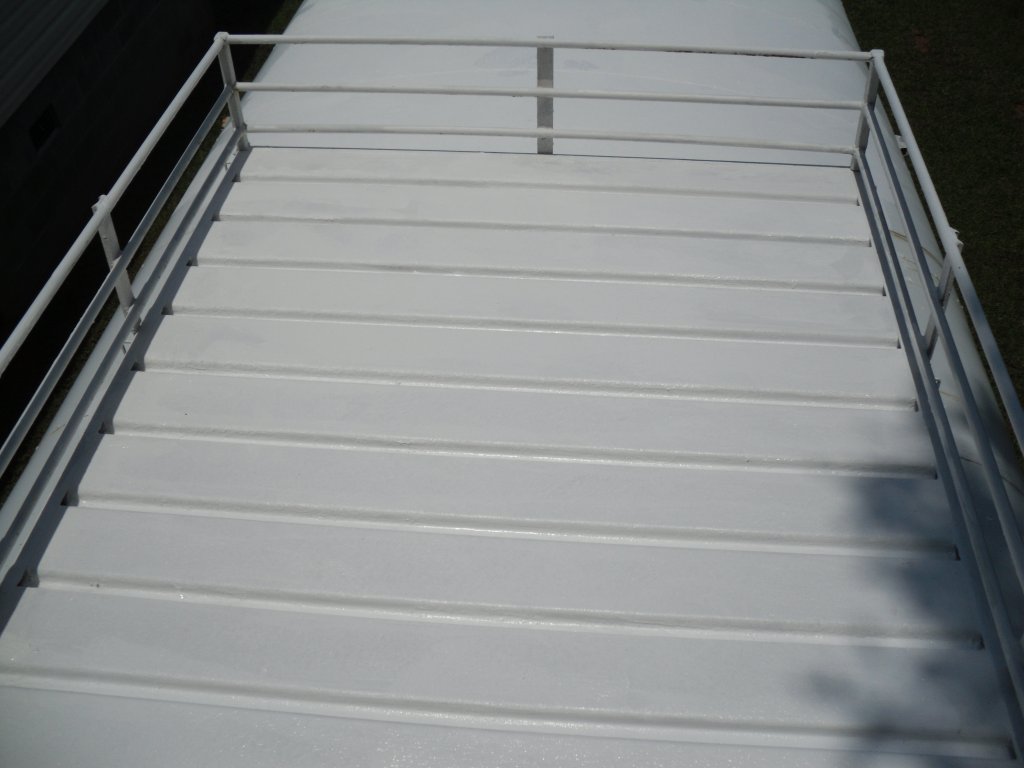 My allergy problems which flare up this time of year due to all the pollen are doing better. I found out on a website why I have such a problem. Atlanta was listed as the city with the second highest pollen count of any city in America. I believe things are much worse here at the campground, for trees are everywhere.

Last week-end they had the Dogwood Festival here in Perry, Georgia. About 3-4 blocks of the downtown were blocked off for vendors and an entertainment stage. One of the vendors was selling local wildflower honey. She told me that taking a teaspoon a day helped alleviate her allergy problems significantly. It was just the selling point she needed to share with me. I bought some, and have been taking a spoon full every morning. Whether the honey is the reason, I cannot say definitively, but I am doing much better.

I rode my bicycle down to the Dogwood Festival, when I got the honey. I guess this qualifies my bike as a form of promised land transportation. It has been used now to transport both milk and honey. Now I just need to find a really big cluster of grapes. I can fill up my basket with them.

In closing, I want to mention that those who wish to contact me by U.S. Postal Mail can send mail to me directly at the campground. This will keep me from having to ask my daughter to check my P.O. Box in Montezuma as often. Montezuma is about 20 miles from my location, and a bit too far for me to ride my bike. You will find my mailing address at the campground below. I will still be keeping my P.O. Box as I use it for communication with prisoners who receive my newsletters.