Scripture Views on the News

Wars and Rumors of Wars

Matthew 24:6-8
“And you will be hearing of wars and rumors of wars; see that you are not frightened, for those things must take place, but that is not yet the end. For nation will rise against nation, and kingdom against kingdom, and in various places there will be famines and earthquakes. But all these things are merely the beginning of birth pangs.”

A sister in Christ forwarded me the newsletter of Jerry Golden, a believer residing in Israel. Following is an excerpt from his writing.

There is a very large naval force that has come together in the Persian Gulf and surrounding Iran. The USS Carrier Harry Truman has pulled into the area loaded for bear. Israel and the US have grouped bombers and fighter jets in many countries in the Middle East, Azerbaijan, Iraq, Saudi Arabia, and Afghanistan and others. Over the past week USS warship have went through the Suez Cannel, as have Israel subs all capable of launching a Nuclear Attack. And if Iran has already obtained or developed a nuclear warhead this thing will certainly go nuclear bringing the world into a global war. In fact, if Iran goes to the nuclear option Israel will have no choice but to take out Syria, Hezbollah (now all of Lebanon) and the Hamas in Gaza, and also Egypt if it tries a sneak attack, in short order or face terrible civilian causalities.

While most people are concerned and closely watching the oil spill in the Gulf of Mexico and justly so all hell is about to break lose around the world if Iran is attacked. Another decoy or if you will smoke screen is the change of command in Afghanistan that has also found 24/7 coverage in the media news. To put it bluntly, folks we are in deep trouble and if you haven’t made your peace with the Prince of Peace Yeshua you are in even worse trouble, if you haven’t prepared and stored some water and food, made some arrangements for your family all I can say is shame on you. If you are Jewish and you haven’t bought that air plane ticket to Israel, shame on you as well.
[Source: The Golden Report, Jerry Golden, Israel]

This information on a military build-up around Iran is confirmed on the website Debka that reports on Israeli military news. Just scroll down and look at the numerous articles related to Iran and rumors of war.

With What Judgment You Judge, You Will be Judged

Matthew 7:1-2
“Judge not, that you be not judged. For with what judgment you judge, you will be judged; and with the measure you use, it will be measured back to you.”

Daniel Eggers has some interesting insights into how certain key words used by Barack Obama and his administration relate to events in the news that are acts of judgment on the nations. He relates how Obama’s push to “freeze” settlement activity in Israel’s West Bank area was followed by a succession of winter storms to hit the Washington D.C. area. Some of these storms were so severe that they were dubbed a “snowpocalypse.”

Daniel then relates how the Obama administration repeatedly stated that Israel and a Palestinian State were “core” issues in the government’s policy. Various judgments related to the earth’s “core” were subsequently manifested, including the volcano that erupted in Iceland that shut down European air traffic, and the Deepwater Horizon disaster.

Daniel’s post on this topic can be found here:

In the Last Time there shall be Mockers

Jude 17-18
But you, beloved, ought to remember the words that were spoken beforehand by the apostles of our Lord Yahshua Christ, that they were saying to you, “In the last time there shall be mockers, following after their own ungodly lusts.”

A recent blog I posted on the parable of the Gulf Oil Disaster was met with an onslaught of mocking. The blog can be read at the following link:

Shortly after it was posted I began to receive a flurry of comments that included much profanity, insults, sarcasm and mocking. I wondered where all these mockers and scoffers had come from for it was evident that these were not the regular readers of my teachings.

A sister in Christ wrote to me a few days ago and said she was made aware of my teachings by some scathing writings in the Houston Press and Beaumont Enterprise. I located the written pieces and was then made aware of the source of all the mocking. It is insightful to see how the citizens of one of America’s largest cities respond to a prophetic word of judgment. I will therefore provide the links for those interested.

A couple details stood out to me in these posts. It was a reader named “Jezebel” that initiated these tirades. Those familiar with Jezebel in the Bible will recognize her as one who initiated attacks against the prophets of Yahweh. She had many prophets killed, and threatened to end the life of Elijah, but was unsuccessful in doing so. Her own life ended ignominiously as the dogs ate her flesh and scattered her as dung across the face of the land. This was Yahweh’s judgment for one who filled the land with perversity.

My attention was drawn to the fact that the writing criticizing the prophecy of the Gulf Oil Spill was printed in a section devoted to “celebrity sex and fashion.” This makes the words of Jude stand out all the more:

“In the last time there shall be mockers, following after their own ungodly lusts.”

What will happen to the citizens of Houston, and indeed all of America, who have received reproof for sensually depraved lives leading to the murder of millions of unborn children? Will not Yahweh mock them who mock His word? Will He not hold THEM in derision?

Ezekiel 23:32-34
“Thus says Yahweh God, ‘You will drink your sister’s cup, which is deep and wide. You will be laughed at and held in derision; It contains much. You will be filled with drunkenness and sorrow, the cup of horror and desolation, the cup of your sister Samaria. And you will drink it and drain it. Then you will gnaw its fragments and tear your breasts; for I have spoken,’ declares Yahweh God.”

Revelation 2:20-23
But I have this against you, that you tolerate the woman Jezebel, who calls herself a prophetess, and she teaches and leads My bond-servants astray, so that they commit acts of immorality and eat things sacrificed to idols. And I gave her time to repent ; and she does not want to repent of her immorality. Behold, I will cast her upon a bed of sickness, and those who commit adultery with her into great tribulation, unless they repent of her deeds. And I will kill her children with pestilence; and all the churches will know that I am He who searches the minds and hearts; and I will give to each one of you according to your deeds.

People of God, we live in an hour of great calamity upon the nations. The judgments of Yahweh are being poured out, and His judgment will begin with His own house. There were those mocking who identified themselves as Christians. There is no fear of God before the eyes of many of His people. They see nothing wrong with a life of fornication, abortion, and a constant focus on pleasure and self-gratification. My heart is disturbed to see such a callousness among those in this nation. Their words are not mocking this minister, but the One who has sent him. This is evident in the irreverent image of a winking Jesus, with the caption below it “I’m looking at you Houston.” 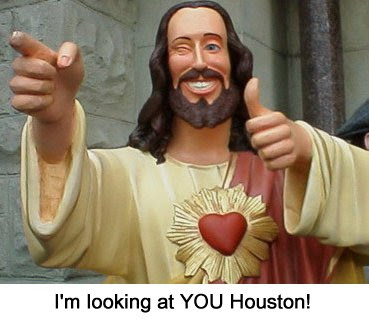 God is truly looking at Houston in this hour, and many other places. Peter links together the attitude of mocking with the judgment of God upon the nations.

II Peter 3:3-7
Know this first of all, that in the last days mockers will come with their mocking, following after their own lusts, and saying, “Where is the promise of His coming? For ever since the fathers fell asleep, all continues just as it was from the beginning of creation.” For when they maintain this, it escapes their notice that by the word of God the heavens existed long ago and the earth was formed out of water and by water, through which the world at that time was destroyed, being flooded with water. But the present heavens and earth by His word are being reserved for fire, kept for the day of judgment and destruction of ungodly men.

People of God, if you are not anticipating severe judgment upon the nation of America, you should be. Yahweh has given the nation into the hands of evil men skilled in destruction. Her economy is shattered. The people are in financial bondage. Millions are out of work. Cities have been decimated by unemployment, real estate collapse, hurricanes, tornadoes, earthquakes, drought and an ever increasing violence and perversion. Yet the citizens have not mourned, nor repented. Instead, they mock.

Proverbs 29:1
He who is often rebuked, and hardens his neck, will suddenly be destroyed, and that without remedy.

The hour is indeed late. Watch and be sober.

Note: I have been very much occupied with traveling and teaching. I am presently in California and am taking some time to get caught up with editing and posting audio files from recent messages. I will also be posting some blogs. Please understand that my time for e-mail is currently limited. I will be glad to read your comments, but it will take some time for me to answer questions sent to me.