Season of the Hurricane 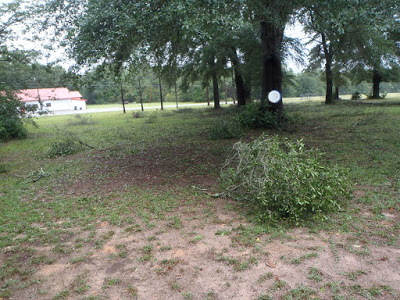 Our Yard After Hurricane Irma

I mentioned that I spent a couple of days after Hurricane Irma cleaning up trash in our yard and mowing the grass. The yard now looks as good as it gets. I piled the brush in a pile. To give you a sense of the size of the brush that I piled, it is over head height. 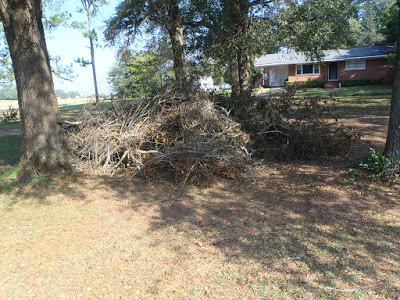 The brush pile goes back to the tree behind it. I also got some diesel to pour on it when my daughter is ready to burn it. She will move it to an open spot up near the driveway to burn it. I spent two days getting the yard back in shape. I consider that pretty good timing as it was unusually cool for the time of year in Georgia. After 3 days it returned to much warmer weather. It has been in the lower 90s during the day and getting down to the mid to upper 60s at night.

It seemed fortunate that the warm weather returned at the same time that the power came back on. My bus is parked in the shade of a couple of trees, but it still gets hot here, and the humidity is rough at times.

Yesterday I had my last bout with the hurricane. I had come down to the Coffee Shop to answer my e-mails on Tuesday. It was late in the afternoon that I decided to get an ice cream cone there. I did notice that the ice cream was sparkly, as if it had refrozen. I should have asked them if they were able to keep it frozen during the storm. I ended up with a case of food poisoning yesterday. I couldn’t eat anything and I slept through much of the day. It was painful to even sit up. I did run to Perry as the computer shop called me to let me know my system was ready. They asked me if I had made my two drives on the system “RAID” drives. When I answered no, the gentleman told me that they had gotten crossed up and started to act as RAID drives when the system was rebooted. He straightened them out.

There has been more in the news lately. The weather channel is still waiting to see if Hurricane Maria is going to strike the East Coast or stay out to sea. We have had so much problem with hurricanes of late. Not a single hurricane has struck the U.S. with major force wind and rain for the last 12 years. There have been 2 to strike it so far this year, and the 3rd one is a possibility, though at this time it has not made up its mind. Hurricane Maria has been a force 5 storm already. It was nearly that strong when it struck Puerto Rico. It was 155 mph which is only 2 mph below a category 5 storm.

Also on September 19th Mexico City was struck by a 7.1 earthquake. It was the same month that Southern Mexico was struck by an 8.1, the most severe earthquake in a century. Tuesday’s earthquake was preceded by many taking earthquake precaution drills on the anniversary of the 1985 earthquake that killed thousands in the same location.

The Bible says the following about earthquakes.

Mark 13:8
There will be earthquakes in various places; there will be famines. These are but the beginning of the birth pains.

The following is the path of the 2024 Eclipse. 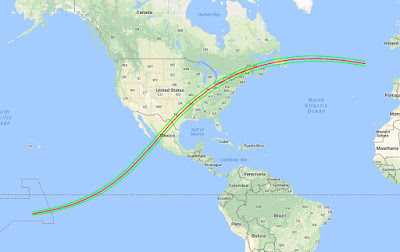 The eclipse of 2024 touches Mexico, the United States, and Canada. These are things I am pondering in my spirit. The CANAMEX Highway, part of NAFTA, connects the three countries. Following is a description of the Highway in Wikipedia.

The CANAMEX Trade Corridor was outlined in 1991 in the “ISTEA” highway bill, and defined by Congress in the 1995 National Highway Systems Designation Act, Public Law 104-59, November 28, 1995.


Route description
The CANAMEX corridor is defined by the numbered highway designations along its length:


Since the CANAMEX corridor was originally proposed, a second proposal, Interstate 11, would run along a similar path in Nevada and Arizona and replace most of the current non-freeway segments in those states.
[End Excerpt]

Things are seeming rather brittle along the CANAMEX highway. The three countries have been linked in various ways in recent years. President Trump’s war on illegal aliens is only a bunch of smoke. Don’t be distracted by it.