Following are some additions I have added to the posts on this series titled Dragon Flood. In the chapter titled The Unseen Hand, the following words have been added.
—

In George Washington’s inaugural prayer, spoken on April 30, 1789, he included the following statement.

“No people can be bound to acknowledge and adore the Invisible Hand which conducts the affairs of men more than the people of the United States.”

It should be noted that George Washington did not once mention Jesus Christ, nor the God of Abraham, Isaac and Jacob in his inaugural prayer. Understanding that he was a Freemason, whether he spoke with knowing intelligence, or in ignorance, that Invisible Hand guiding his actions was not Yahweh, but Lucifer. This makes his statement all the more troubling for those who are having their eyes opened to discern the truth of America’s founding.
—
Also, in the same chapter following the quotation citing that there were 9 Freemasons to sign The Declaration of Independence, and possibly ten more who may have been, I have added the following.

—
The number of Freemasons to sign The Declaration of Independence is much disputed. The above estimate must be considered very conservative, and should be noted that the authors were seeking to counter the view that Freemasons had an inordinate influence upon the founding of America’s government.

Manly P. Hall in his book America’s Assignment with Destiny states that 51 of the 56 signers were Freemasons. Manly Hall was writing as an advocate of Freemasonry, so his figures may reflect this bias. The truth likely lies somewhere between the low estimate of nine, and the higher estimates in the fifties.
—
On another subject, I have spent the past couple days getting caught up with various home duties. Foremost among them was hooking up my solar panel auxiliary power system. I had assembled all the major components of this system some months back at the beginning of the Summer. All that I lacked was some wiring and cables to connect the components together. I also needed to build frames to support the solar panels so that they could be positioned out in the sun at various angles depending on the time of year. 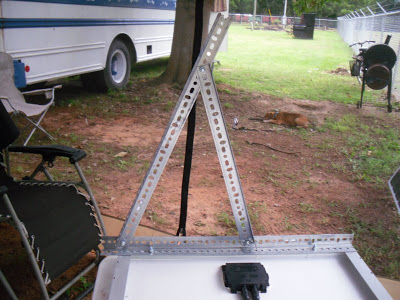 I had purchased some slotted angle iron to be used for the frames some time back, but needed to go to the hardware store and get various nuts and bolts to assemble the frames. The above picture shows the basic frame. This is duplicated on either end of the solar panels. Following is a picture of all four panels with the frames attached. 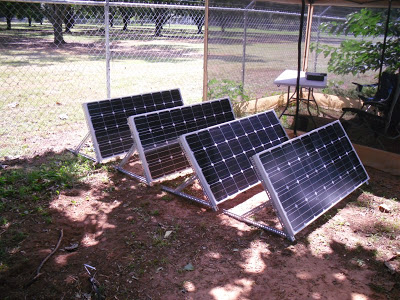 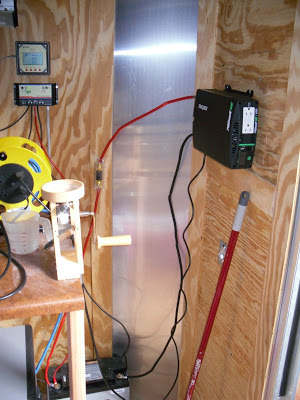 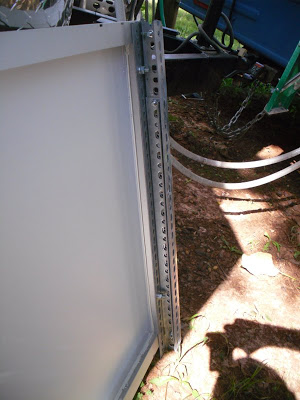 This last picture shows the frame on the solar panel folded shut for storage. Yahweh was very gracious to permit me to acquire this system. It will make living off grid much more convenient as I will be able to run lights and fans, as well as my freezer and grain mill even when I do not have access to outside power.

The air conditioner on top of my bus quit working a few days ago, and this prompted me to complete the work on my auxiliary power system. Something burned out on the roof AC as I heard a small pop and then smoke began pouring out of the unit. I shut it off and have been living without it the past few days.

It really demonstrates the grace of God in that this occurred after the intense heat of the Georgia summer had abated. My bus is parked in the shade, and I have opened up my screened windows, and screened entrance door, and the roof vent. With a fan running inside the bus it has been quite comfortable. I do not anticipate actually needing the AC again for the next six months, and by then I anticipate the Father will either have provided for its repair, or I will possibly be living off-grid where I could not use it anyway. My auxiliary power system is not sufficient for running the air conditioner.

I have truly found the benefit of having a bus with windows that open and screens to keep out the bugs. (The gnats and mosquitoes are still in abundance here in Georgia.) 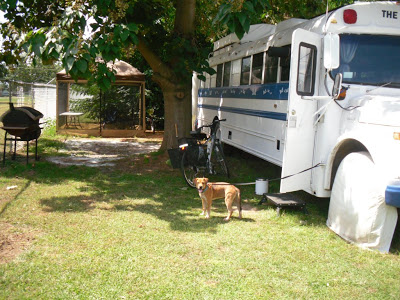 Here is my shady camping spot. There is Champ posing in the foreground. You can see he is not a small puppy anymore. He is not grown yet, either. I have a dog jogger attached to my bike. Here is a video of me taking him for a little stroll.

I apologize if including this video makes the e-mail abnormally large for those who subscribe to the Parables Blog. I have always in the past provided links to YouTube videos, but have never used the Blogger feature to embed a video. I am not sure how it is going to work, so I wanted to try it out. If it sends out the entire video to those who receive the blog by e-mail, rather than simply including a link, or loading the video when clicked upon, I will avoid embedding videos this way in the future. Thanks for your patience, and I would appreciate your feedback.