Yahweh uses the heavens as His celestial message board. From the opening chapter of the Old Testament we read that the heavenly bodies serve as signs.

Genesis 1:14
Then God said, “Let there be lights in the expanse of the heavens to separate the day from the night, and let them be for signs…”

When Yahweh performs a work, He attests to that work through the prophetic voice of the heavenly chorus. We see a clear example of this when the wise men from the East observed the heavens and understood that a particular star was being used to foretell of the birth of the King of the Jews. Yahshua testified that such signs would also attend the days before His return.

Luke 21:25-26
“There will be signs in sun and moon and stars and on the earth, dismay among nations in perplexity at the roaring of the sea and the waves, men fainting from fear and the expectation of the things which are coming upon the world…”

It is certain that nothing in Yahweh’s creation occurs without purpose or symbolism. Yet many signs pass before the eyes of the saints without notice, or understanding. To understand a message that Yahweh is declaring, we must know the language He is speaking in.

For many years I have been interested in Biblical astronomy. I have three books on the topic that I use as references when I ponder some celestial news event. These books are The Gospel in the Stars by Joseph Seiss, The Heavens Declare by Wiliam D. Banks, and The Witness of the Stars by E.W. Bullinger. This latter book can be read online.

All three of these men acknowledge their profound debt to Frances Rolleston, who in her 80s published the book Mazzaroth; or the Constellations. Her book is also available online, having been first published in 1862.

The word Mazzaroth is the Hebrew word that equates to the English Zodiac. The word Mazzaroth is found in Scriptures, in a context that plainly indicates that Yahweh has set the stars in the heavens, named them, and uses them for signs and messages for those with understanding.

Job 38:31-33
Can you bind the cluster of the Pleiades, or loose the belt of Orion? Can you bring out Mazzaroth in its season? Or can you guide the Great Bear with its cubs? Do you know the ordinances of the heavens? Can you set their dominion over the earth?

I do not claim any great scholarship in understanding the heavenly signs. I got a rather late start in looking into such things, as the churches I was raised in viewed all heavenly signs as demonic, as if Satan owned the heavens and only pagan astrologers would presume to look for messages there.

I think it is tragic that the church at large shows such disdain for what is written in the heavens. There are profound examples of Yahweh announcing His greatest works on earth through signs in the heavens. The announcement of the birth of Messiah was announced in the heavens, and those with understanding in that hour understood the message correctly.

Matthew 2:1-2
Magi from the east arrived in Jerusalem, saying, “Where is He who has been born King of the Jews? For we saw His star in the east, and have come to worship Him.”

The Mazzaroth (Zodiac) is the great heavenly Way. Day after day the Sun travels through its course in the heavens until it passes through all twelve constellations and their 36 lesser constellations called decans. These constellations bear names that can be traced back to ages of great antiquity, with evidence that they were known among men before the flood of Noah.

I suppose one of the reasons Christians have disdained this heavenly testimony is that they so seldom lift their attention above this earth, for the world and the things in it has captivated their hearts. Is it not symbolic that one must cast their gaze up away from the earth to the heavens wherein God dwells in order to discern what He is speaking there? We can be so earthly focused that we fail to recognize the witness of God in the heavens.

Each of the twelve constellations, and their associated decans, declare the gospel of God. The plan of redemption is written large in the heavens. The first constellation is Virgo, and it depicts the virgin who gives birth to the Son of God. The last of the constellations is Leo, representing the Lion of the Tribe of Judah who comes back to establish His kingdom upon the earth.

There is a noteworthy astronomical news item being reported on at this time. Some amateur astronomers discovered a Nebula in the constellation Cygnus. This nebula is extraordinary in appearance, resembling a soap bubble. 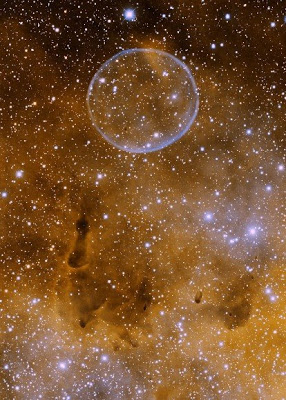 Jim Bean, a brother in Christ from California, forwarded to me an article on this discovery, and I became intrigued by it.

It looks like a soap bubble, but it’s about five light-years across and floating in deep space. Three amateur astronomers in California found the beautiful planetary nebula a year ago, and they have now been officially recognized as its discoverers. Officially named PN G75.5+1.7, the “soap bubble nebula” is the remnant of a dying star that shed its outer shell about 22,000 years ago. It lies about 4,000 light-years away in the constellation Cygnus. Chemical engineer Dave Jurasevich was the first to see it on July 6, 2008, at the Mount Wilson Observatory near Pasadena, Calif. Nearly two weeks later, on July 17, 2008, medical professionals Keith Quattrocchi and Mel Helm, both of the Fresno area, independently spotted it from their Sierra Remote Observatories high in the California mountain range.
[Source: http://www.foxnews.com/story/0,2933,534747,00.html]

One of the first things I did was to look at the constellation in which this unusual nebula was found, for the constellations provide the background, or context, for understanding heavenly signs. 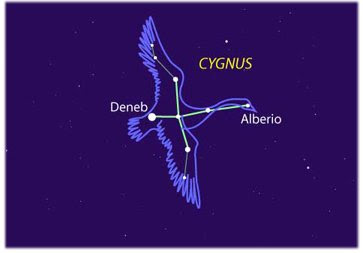 Cygnus is The Swan. The names of the stars in this constellation date back to ancient times. They are full of meaning, and found within Cygnus is another asterism which is called The Northern Cross. This is the most perfectly shaped cross found in the heavens. The swan carries the cross on its back. Following is an excerpt from The Gospel in the Stars by Joseph Seiss.

As the white dove is the emblem of the Holy Ghost, so the elegant, pure, and graceful swan is a fitting emblem of Him who, dying, sends forth the glad river of living waters… (Note: Cygnus is a decan of the Constellation Aquarius, who is figured as The Water Pourer.) This swan is on the wing, in the act of rapid flight, “circling and returning,” as its name in Greek and Latin signifies. It seems to be flying down the Milky Way, in the same general direction with the river which pours from the heavenly urn. 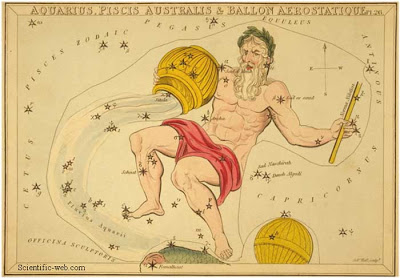 Aquarius – The Water Pourer
The principal stars which mark its wings and length of body form a large and beautiful cross, the most regular of all the crosses formed by the constellations. It is thus the bird of matchless beauty, purity, dignity and grace, bearing aloft the cross, and circling with it over the blessed waters of life; whilst in the naming of its stars, the brightest is Deneb, the Lord or Judge to come; Azel, who goes and returns; Fafage, glorious, shining forth; Sadr, who returns as in a circle; Adige, flying swiftly; Arided, he shall come down; and other words of like import, we find strong identifications of this lordly bird-king of the waters with Him who, through the preaching of the cross… cries and says, “If any man thirst, let him come unto Me, and drink.”

The star names of CYGNUS are all in agreement, The Lord or judge is Coming Again Quickly. His journey has been similar to a circle, in that it brings Him back again from whence He departed. He Shall Come Down, and His Coming Down Again shall be a Glorious Shining Forth of His resplendent majesty… This is the same Jesus who came back again to us from the dead, appearing to the disciples and many witnesses at His first resurrection, and who has promised that He will yet come to us again from heaven the second time when He comes in glory and judgment.

Acts 1:9-11
And after He had said these things, He was lifted up while they were looking on, and a cloud received Him out of their sight. And as they were gazing intently into the sky while He was departing, behold, two men in white clothing stood beside them; and they also said, “Men of Galilee, why do you stand looking into the sky? This Jesus, who has been taken up from you into heaven, will come in just the same way as you have watched Him go into heaven.”

We read then in the skies the background of this recent heavenly discovery. Cygnus testifies of the Lord and Judge returning in glory. He bears the cross on His back, for He must deliver the cross to His people that they might be purged, purified and refined. He is coming swiftly, and His intent is to prepare a Bride who will be without spot or blemish.

This message of Christ coming to cleanse His bride is reinforced in the name that describes this Nebula. It is called “the Soap Bubble Nebula.” Soap and swans are not an unusual association, for swans are a symbol of that which is pure and clean, and their down is prized for its softness.

I Corinthians 6:9-11
Or do you not know that the unrighteous shall not inherit the kingdom of God? Do not be deceived; neither fornicators, nor idolaters, nor adulterers, nor effeminate, nor homosexuals, nor thieves, nor the covetous, nor drunkards, nor revilers, nor swindlers, shall inherit the kingdom of God. And such were some of you; but you were washed, but you were sanctified, but you were justified in the name of the Lord Yahshua Christ, and in the Spirit of our God.