Spelling it Out for the Church in America 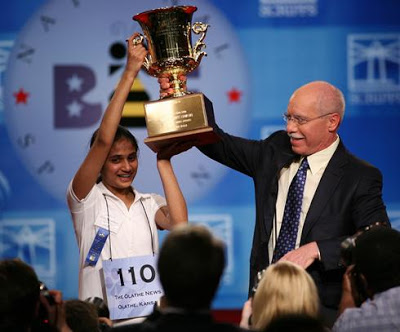 Several people notified me of a remarkable item in the news that contains a somber message for the church in America.

Kavya Shivashankar, a 13 year old girl from Olathe, Kansas won the Scripps National Spelling Bee by correctly spelling the final word given to her, which was “Laodicean.” This too, is Christ’s final word for the church in America.

The word “Laodicean” has come to mean someone who is lukewarm and lacking in commitment. It would be profitable to consider carefully the words that Christ spoke to the church in the city of Laodicea. Laodicea was a wealthy city in what is now Turkey, but then called Asia Minor. It was situated along a popular trade route, and the soil around the city was very rich and the people of the place prospered greatly.

Today the ruins of the city are evident. There is a well preserved stadium, and there is evidence of great wealth and luxury. According to the website Wikipedia, “The ruins bear the stamp of Roman extravagance and luxury…”

In remarkable ways, the political, social and economic environment of ancient Laodicea bears a great resemblance to America. The church that was founded there faced the same temptations and snares that are found in prosperous and fertile lands where there is great commercial freedom today. There is great benefit in studying the words of Christ to the church that dwelt in Laodicea, for the Spirit is testifying that what was written to them is being addressed to the church in America today.

Revelation 3:14-18
And to the angel of the church in Laodicea write: “The Amen, the faithful and true Witness, the Beginning of the creation of God, says this: ‘I know your deeds, that you are neither cold nor hot; I would that you were cold or hot. So because you are lukewarm, and neither hot nor cold, I will spit you out of My mouth. Because you say, “I am rich, and have become wealthy, and have need of nothing,” and you do not know that you are wretched and miserable and poor and blind and naked, I advise you to buy from Me gold refined by fire, that you may become rich, and white garments, that you may clothe yourself, and that the shame of your nakedness may not be revealed; and eye salve to anoint your eyes, that you may see.’”

The church in America today has equated material success with spiritual attainment. Yet the judgment of God stands in complete contradiction. Across America today stand tens of thousands of churches that are marked by affluence, and they proclaim a gospel of prosperity, ease, comfort and material blessing. This church has rejected the cross that every disciple of Christ must bear. They have traded a Spirit directed life for a life where they are led by the desires and passions of their own souls.

Such a people have become repugnant to Christ. He does not savor them at all. He warns that unless they repent He will quickly vomit them out of His mouth. The words of Christ to the church in Laodicea constitute the last statement of Christ to seven churches that were located in Asia Minor. Even so, the final word at the Scripps Spelling Bee was Laodicea. The young girl who spelled the word correctly and won the contest had the habit of tracing out each word on the palm of her hand, and she did this with the word Laodicea. 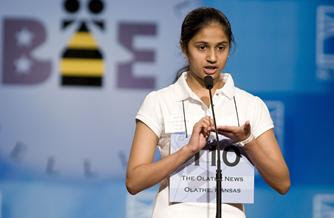 Isaiah 49:14-16
But Zion said, “Yahweh has forsaken me, and the Lord has forgotten me.” “Can a woman forget her nursing child, and have no compassion on the son of her womb? Even these may forget, but I will not forget you. Behold, I have inscribed you on the palms of My hands; Your walls are continually before Me.”

God cannot forget His people, yet there are times when it appears to the people of God that He has forsaken them. This is because God is very zealous for His people. He disciplines those whom He loves that they may share His holiness, and He will severely discipline the church today that shares the error of Laodicea.

Revelation 3:19
“Those whom I love, I reprove and discipline; be zealous therefore, and repent.”

The name of the young girl who won the spelling bee is Kavya Shivashankar. This name is of Indian derivation and comes from the Sanskrit language. Kavya means poem. I noted that she wore the number 110 on her shirt, and she comes from Kansas which lies at the center of America geographically. Similarly, in the Bible there is a book of poetry that lies at the center of the Bible. Following is an excerpt from Psalm 110.

Psalms 110
Yahweh says to my Lord: “Sit at My right hand, until I make Your enemies a footstool for Your feet.” Yahweh will stretch forth Your strong scepter from Zion, saying, “Rule in the midst of Thine enemies…” The Lord is at Your right hand; He will shatter kings in the day of His wrath. He will judge among the nations, He will fill them with corpses, He will shatter the chief men over a broad country.

Is not America a broad country? The Spirit has expressly been testifying that a day of great wrath is at hand. America will be filled with corpses. Some have reported that the government has been storing up hundreds of thousands of coffins, and with all that is being reported about an upcoming flu pandemic, it is not hard to imagine multitudes perishing. Add to this the collapse of the economy, civil unrest, the implementation of martial law, attacks by foreign countries, and natural disasters and one can begin to understand that which lies at the door.

This young girl’s last name is Shivashankar. This name is derived from the name of one of the gods of the Hindu trinity. Shiva is viewed as the supreme god of the Hindus and is also known as “the destroyer.” Shiva is depicted as both malevolent, bringing calamity and ruin, and as benevolent, brining good fortune and blessing.

The second part of the name Shivashankar refers to the benevolent end of this destructive god. Shankar means, “bringer of good fortune.” This Indian name bears a testimony of the work of the One true God who also destroys that He might heal and produce good in the end.

Hosea 6:1-2
“Come, let us return to Yahweh. For He has torn us, but He will heal us; He has wounded us, but He will bandage us. He will revive us after two days; He will raise us up on the third day that we may live before Him.”

Hebrews 12:6
“For those whom the Lord loves He disciplines, and He scourges every son whom He receives.”

If the details of this spelling bee were an isolated incident, there would be less reason to be so certain of the meaning that is derived from them. Yet God has been sending a myriad of witnesses that testify the same message. “It is time for judgment to begin at the house of God, and if it is with difficulty that the righteous is saved, what will become of the godless man and the sinner?”

Yahweh has been signifying to many people that it is time to prepare an ark. He has been declaring that judgment is at hand, even as it came in the day of Noah’s flood and the day when Lot fled from Sodom. We see the same focus and activity among Christians today that was present in those days.

A Laodicean church has embraced a pursuit of the world and the things in it. They are focused upon worldly pursuits and material acquisition. When Christ vomits them out of His mouth, their own deluded sense of divine approval will lead to shock, for they do not anticipate the judgment of a holy God.

James 4:4-5
Adulterers and adulteresses! Do you not know that friendship with the world is enmity with God? Whoever therefore wants to be a friend of the world makes himself an enemy of God. Or do you think that the Scripture says in vain,”The Spirit who dwells in us yearns jealously”?

God has “spelled out” His judgment upon His people. The final word is “Laodicean.” Let those who have understanding prepare their hearts and be in readiness for His judgments. They are coming swiftly.