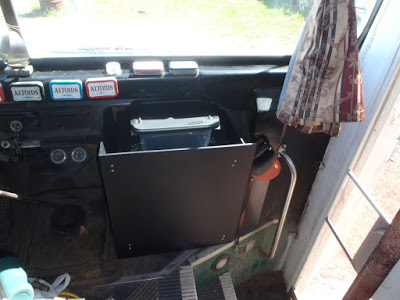 The photo above shows the new dog food storage bin I constructed to make things a bit neater at the entrance to my bus/motorhome. I don’t like clutter. I have always been an admirer of the motto “A place for everything, and everything in its place.” I even wash up the pots and pans BEFORE sitting down to eat dinner, and I always wash dishes as soon as I get through using them. I am not one to leave dishes in the sink.

I learned a long time ago that procrastination doesn’t save any time. Quite the opposite. As the saying goes, “A stitch in time saves nine,” and

You get the idea. Don’t put off fixing things for the cost is always less when you deal with something quickly. My dog food container project was precipitated by something that needed repair. The front of my bus where the storage container is now located used to have a glove box in the dash. I am surprised that it lasted as long as it did. The bus is a 1972 model, which makes it 44 years old at this time. The dash is solid metal, but the glove box interior was made of a heavy type of cardboard. It eventually gave way and everything in it spilled out onto the floor.

I had previously kept a 7 gallon bucket with a twist on lid on the floor, partially under the glove box, and partway sticking out into the walkway in front of the glove box. The bucket was used to store dog food. This wasn’t an optimum solution because I purchase dog food in 40-50 pound bags and the bucket would not hold a full bag. This left me with a large bucket near the entry to my bus, plus a partial bag of dog food sitting next to it until it was used up. It was an eye sore. Clutter. Clutter. Clutter.

When the glove box gave way I decided to make an improvement. I would clear the entry way by using the space under the dash for dog food storage. I looked for a storage bin just the right shape and size to fit under the dash, but to no avail. It is an irregularly shaped space. In the end I purchased two plastic trash bins that were the right depth but were not wide enough. I cut one side off of each of the bins and joined them together. I then constructed a top for this trash bin mash-up out of a sheet of HDPE (High Density Polyethylene). I had some left over from a previous project, and since it was black, it already matched the color of the dash. 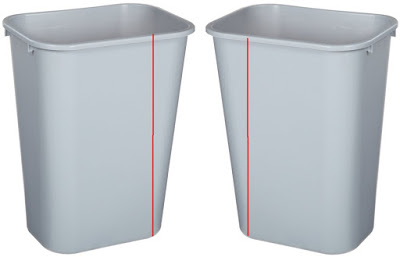 The two trash bins looked like this. I cut the ends off where the red line is marked, all the way across, and then put the two bins together. Once I put a top on it, making it permanent by sealing it with caulk to keep all the insects out, I was left without any way to get dog food in or out of it. I had already thought of that, however. I had purchased a food storage container with a snap on lid to serve as my entry hatch into the bin. I cut the bottom out of the food storage container and cut a matching hole in the lid of the storage bins and attached them together and caulked the joints on top of the storage bin lid to seal out insects. 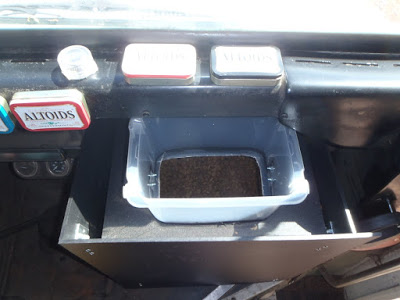 This is a view down into the bin with the snap on top removed. I don’t know what the capacity is of the new storage bin, but a 50 pound bag of dog food fits inside with room to spare. This should solve several problems. It gets the dog food storage out of the way. It utilizes space better. And it places the dog food out of the reach of insects and rodents. Since I live out in the country, mice are something I have to contend with. They like to get into bags of dog food. For some reason they would drop dog food down into my boots which I keep at the front entry. I always thought that was funny, but I am not unhappy about ending this little mouse joke.

Like a typical school bus, mine has windows all along the sides. When I converted the bus into a motorhome I intentionally made a point to leave as many of the windows uncovered as possible. I wanted to be able to utilize natural light for interior illumination. I also wanted to be able to open the windows, and the front door, to let air flow through when the weather is pleasant. The Spring and Autumn are particularly nice here in Georgia. I enjoy leaving the windows open at night so I can listen to the crickets, frogs, and coyotes, as well as waking up to the sound of song birds singing. I installed outside screens on all of the windows when I did the original build out.

School bus windows open and shut rather awkwardly. You have to be right next to the window to get the correct leverage to slide them up or down. With floor cabinets and my desk and other objects between me and the windows, it can be quite difficult to open and shut them. I have pondered numerous ways over the years to make the task easier. Some of my ideas involved a little too much engineering and expense, such as installing linear actuators or small motors to open and shut the windows electrically. In the end I decided to adhere to the KISS model and Keep It Simple Stupid. I think that might be better written as Keep It Stupidly Simple. The less complicated something is, the less likely it is to break and the easier it is to fix if it should break. 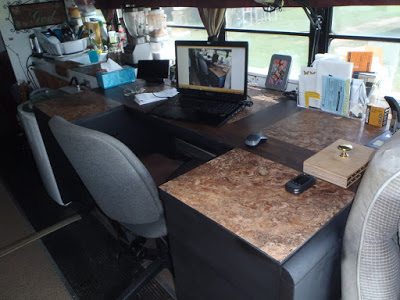 Here is my new desk. You can imagine how difficult it is to reach across the desk, reach up to the top of the windows, press in the levers toward the center, and while doing so raise or lower the glass. What I did was to remove the springs from all the window latches so the latches no longer have to be pressed toward the center of the window. I just leave the latches in the open position. This allows the windows to slide down freely, so the only real issue is how to raise them up again and make them stay closed. To accomplish this I devised a little rope and pulley mechanism. 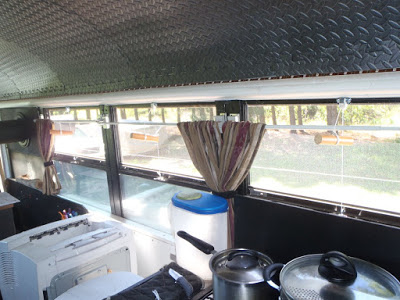 This photo shows three of my windows (I have 12 which are accessible) with the new rope and pulley mechanisms. I just pull the wooden handle and the window goes up. 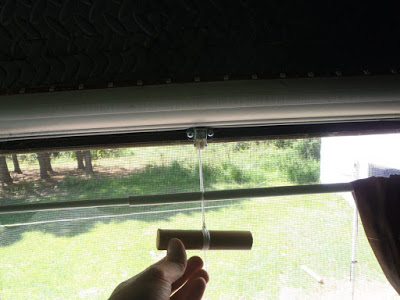 Again, my main trouble was finding a piece of hardware to work. I could not find any small pulleys that would mount the way I needed them to. What I ended up using were cabinet roller catches. They mount just the way I need them to. The only thing they lack is a channel in the roller to keep the twine in place. The small twine I use tends to slip off the side of the roller, but I think this can be prevented by using a little larger twine. I just have to watch the line and make sure it is centered on the roller until then. The mechanism is simple. Pull the wooden dowel and the window goes up. Let the dowel return and the window goes down.

To finish this window mechanism I cut a small piece of angled aluminum for each window to serve as a prop. This holds the window in the closed position once it is raised. 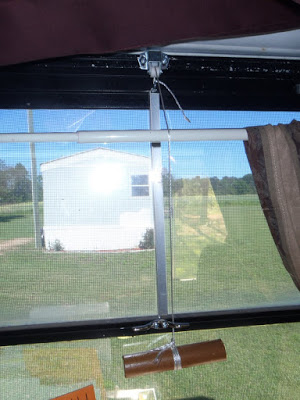 Here is one of my windows with the prop in place. I cut the prop to have one edge longer on the bottom so that it will fit between the glass and window frame, keeping it from slipping out of place. 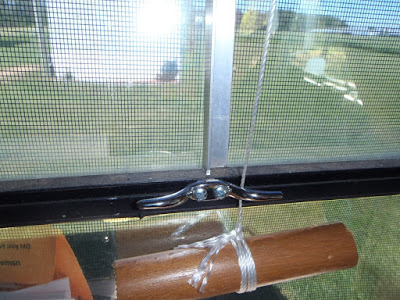 Close-Up of Bottom of Window Prop

In case you are wondering, I drilled a hole through the center of the wooden dowel and fed the twine through it to keep it centered. I am pleased with the finished project, for it does what it is supposed to do. I can now open and shut my windows without straining, or climbing over things.

Today I also took a piece of Green Screen fabric I purchased some time back, and left it with a local seamstress. She is going to cut it to size and sew pockets in it so I can run a 4 foot dowel rod (actually a broom handle) through it and hang it from the ceiling behind my chair at my desk. It will then serve as a backdrop so I can begin making videos while seated at my desk. Something I have wanted to do for a considerable time is to take my books and other teachings and create videos of the material. This will open up an avenue to reach a different audience, for there are a great many people who will watch videos who will not read on online book or a blog post.

On a related note, it was a blessing to use my much larger desk work area to create the Parables Bookshelf Newsletters this weekend. These are the newsletters I send to men in prison. Men continue to write to request being added to the newsletter mailing list. I sent newsletters to 212 men this week. I recently created 22 additional newsletters, adding the book Lunacy and The Age of Deception to the available material, as well as a number of other writings. You can find the additional newsletters available on the Newsletter page of the Heart4God website.