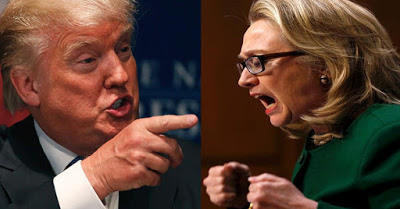 Can you imagine the American people picking the Donald and Hillary as Presidential candidates. This election shows how far the political field can be skewed by the corporate media. Still there are Christians sending me electoral information, with the vast majority of it being in favor of Donald Trump for President. There have even been prophetic words given in favor of Trump. Most of them make use of the Trump card as a symbol of his power to subvert the government and cause problems for the ruling powers.

I would like to show once more that both Trump and Hillary are working for the same people. It is my hope that by doing so I might cause some Christians to recognize that the government is the beast of Revelations and to forego their participation in supporting it.

I am surprised that any Christians could still be fooled by the government (a government of the bankers and other multi-national corporations) and would continue to send me partisan information about it. I have written thoroughly about it. I am assuming that some readers did not review the articles. I urge them to take the time now to review the articles that they might be spared the troubles they are going through.

Look again at the pictures at the start of this post. Isn’t there a similarity between the looks presented by Trump and Hillary. Both of them are well known for posturing. What does the Bible say about choosing an angry, or a proud man to be one’s guide.

Prov 29:22-23
An angry man stirs up strife, and a hot-tempered man abounds in transgression. A man’s pride will bring him low, but a humble spirit will obtain honor.

Prov 26:21
Like charcoal to hot embers and wood to fire, so is a contentious man to kindle strife.

The evil of choosing a woman to lead the government is even worse.

Isa 3:12
Oh My people! Their oppressors are children, and women rule over them. Oh My people! Those who guide you lead you astray and confuse the direction of your paths.

It was the way of honor for a man of righteousness and faith to guide a people. What a shame it was for a woman, or a young man to lead them. We are so far gone in this nation that such things are hoped for. How many people in America would write in Hillary’s name if she had not been selected? Donald Trump will undoubtedly have some more women, or others, to drag his name down before the election. But what if he does not? Would he be a good choice? Only by comparing him to someone as evil as Hillary would Donald Trump be a better candidate.

I have watched Hillary’s campaign unfold just as it was supposed to. The hardest strokes against her came out early on, over a year ago. The charges about her that could be damaging if anyone cared to make them stick were brought out long enough ago that people are now considering them old news. It is at this time that the charges against Trump come out. The reason is clear. Trump was never designed to get the Presidency so his charges come out in this order. Let no one mistake that this was well thought out and practiced by Trump as well as Hillary. Hillary has been the political choice all along, but what if she should not got the elected?

Even the disdain between the two is false. Trump is playing like he is upset that there are problems with the ability to make money in this nation. In all honesty Trump has never had a day’s worry in his life. He has not driven a car for himself for a long time. Neither has Hillary. They are both the pampered pets of the global elite. As far as the sexual antics of Trump, not even the half of it has been told. He is a degenerate. A man with a billion dollars can get whatever he wants, especially if he is not being checked up on. Just look up the name Jeffrey Epstein along with Donald Trump and you will find that Trump has been accused of rape of a 13 year old. I believe the charges, for men like Trump are used to getting their way. It is as common to them as not having to drive oneself.

The question remains, “Why are so many Christians backing Trump.” The Bible warns people against endorsing those who fall below the status of a righteous man.

I Timothy 5:22
Do not lay hands upon anyone too hastily and thereby share responsibility for the sins of others; keep yourself free from sin.

There are millions of Christians who are violating this admonition. There are untold numbers who are choosing leaders who will receive only judgement from Christ. Some of the sins they are guilty of is as serious as making a mockery of  scripture and acting as if they are saints.

What if Trump’s candidacy is a horrific and deceptive set-up. One of the following videos asks that question.

I am not endorsing either person’s role as a spokesperson for Yahweh. I do believe they share some good things, however. These are things every person should be asking. The people’s other beliefs about the state of politics, and their knowledge of propaganda, is deficient. No one makes it to the highest level of political intrigue without being chosen for the role by a group of men or women sitting around a table in a small conference room.

The conscious and intelligent manipulation of the organized habits and opinions of the masses is an important element in democratic society. Those who manipulate this unseen mechanism of society constitute an invisible government which is the true ruling power of our country.


We are governed, our minds molded, our tastes formed, our ideas suggested, largely by men we have never heard of. This is a logical result of the way in which democratic society is organized…


Whatever attitude one chooses toward this condition, it remains a fact that in almost every act of our daily lives, whether in the sphere of politics or business, in our social conduct or ethical thinking, we are dominated by the relatively small number of persons – a trifling fraction… who understand the mental processes and social patterns of the masses. It is they who pull the wires which control the public mind, who harness old social forces and contrive new ways to bind and guide the world.


It is not usually realized how necessary these invisible governors are to the orderly functioning of our group life. In theory, every citizen may vote for whom he pleases…


In theory, every citizen makes up his own mind on public questions and matters of private conduct. In practice, if all men had to study for themselves the abstruse economic, political, and ethical data involved in every question, they would find it impossible to come to a conclusion about anything. We have voluntarily agreed to let an invisible government sift the data and high-spot the outstanding issue so that our field of choice is narrowed to practical proportions. From our leaders and the media they use to reach the public, we accept the evidence and the demarcation of issues bearing upon public question…


A presidential candidate may be “drafted” in response to “overwhelming popular demand,”  but it is well known that his name may be decided upon by half a dozen men sitting around a table in a hotel room.
[Edward Bernays, Propaganda]

These words written in 1928 are just as pertinent today as they were back then. Trump and Hillary Clinton have both been chosen for the final vote, and the next President has been chosen as well. You will have a winning vote no matter who you vote for. Both Hillary and Donald have been chosen for this election. 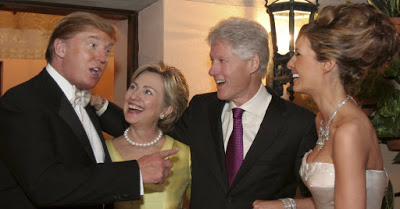 President Clinton and Trump have been golfing together many times. Any sense of aggravation Trump holds for Clinton’s sexual transgressions are a matter of public record. He made known his true feelings in 1998 in an interview with Neil Cavuto. In describing the claims of Monica Lewinsky and Paula Jones’ he defended Bill Clinton as a “victim himself” and said of the women who accused him that they were “really an unattractive group.”

People, this is the true character of the men and women you are voting for. Don’t be misled. You are being played as a party hack. Open up your eyes. Don’t be responsible for the misdeeds of others.