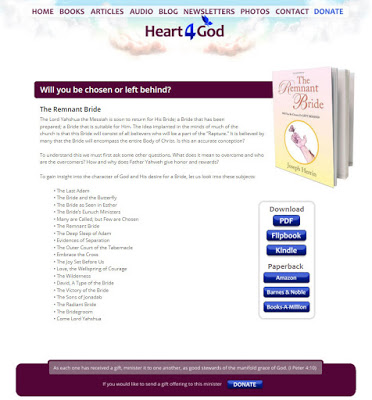 This blog is about the book The Remnant Bride. It takes the book from its place on the Heart4God site and gives you a brief rundown on the book. I feel that some of the writings have been on the site for such a length of time that a new reader to the blog would not know about them, so I am going to give a quick review of each of the books I have written from time to time. There are 21 books and I anticipate giving a review of one book every two weeks.

The Remnant Bride is the first book that I wrote back in 1999-2000. I had wanted to write for years, but I had to wait until Yahshua said write to begin. In 1999 he had me start by editing a book by a prophet to our church. The prophets name was Monty Stratton, and he had a profound effect upon my life. It was through his writing that I became aware of the presence of signs, or parables everywhere. There were parables in the Bible everywhere I looked, from the creation of the heavens and the earth in Genesis to the revealing of the kingdom of Yahshua in Revelation. There were also revelations in the news, and in the signs all around us. I came to see that this was so as I edited Monty Stratton’s book called The Unveiling.

Please realize that I wasn’t writing Monty Stratton’s book, I was merely editing it. His grammar and diction were in disarray in many places. He asked me to correct this, but asked me to not change the style of writing nor to present his facts in different ways. I did precisely what he asked for. I suppose I made more than a couple thousand edits to his writing while leaving the presentation exactly as he wrote it. This was a little bit hard for me as I am a writer at heart and I saw many changes I would make to his book. Nevertheless, I left it the way he wanted it and I gleaned much from what he wrote.

I did not know it at the time, but the Lord was using this time in teaching me how to write a book. He had many books for me to write over the coming years, and the number is 21 to date. After editing the book for Monty Stratton, and writing the introduction, I felt a release in my spirit to begin writing my own books. This was quite unexpected, for up until this time I had felt like writing many books only to have the Holy Spirit say no, the time was not yet. This had gone back to my time in college where we had to take a test to earn our degree. The test had two parts, and the part I want to mention is the writing portion. We had to choose one of three essays, whose terms were given to us. The essays were then sent to three professors throughout the state and each one graded our writing. When mine came back there were no errors on it, and no suggestions for making it better. I received an award for having a perfect essay.

Writing was not unusual for me. I had done lots of writing in High School. The Lord had channeled me into this route by giving me brittle bones. I had a hereditary bone disease called Osteogenesis Imperfecta, or imperfect bone formation. I had broken about six or seven bones while in Middle School and High School, and I had not done much to break them. I took it easy when at home and would go to the library a couple times a week and check out five or six books at a time. I spent my free hours in my room reading books. This too would be used to prepare me for writing many years later. 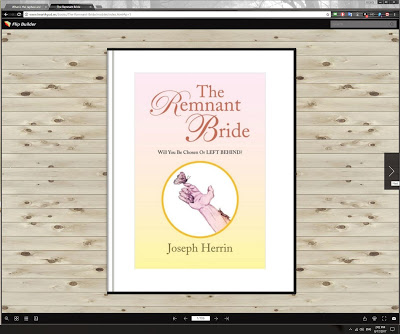 If one should think that their natural strengths are all that is needed to minister, they are wrong. The Lord showed me that I could not lead a single person to him by my own powers. Unless the Lord told me to share with a person I would be like a still small voice in the midst of a hurricane. I not only needed the Lord’s leading, I needed His power. In 1999 I sensed His leading me to write a book. The book was called The Remnant Bride. I was 38 years old.

You may think 38 years old seems like an awfully long time to be called of the Lord to write. I had many things I had been taught wrong that I needed to get right first. I was raised in church in a Conservative Baptist denomination and I thought that everything I saw and did in church was right. About the time I turned sixteen I began to differentiate between denominational doctrine and Yahweh’s doctrine. It would take until I was 38 for the Lord to tell me that I was ready to write.

I had always been one to study according to theme. I could not teach the Bible beginning with Genesis One and going on book by book. I lived with my Strong’s Thesaurus and the myriad topics that I searched out since I was about 14 years old. This new book I was to write was to be no different. I would write on the bride of Christ the way I studied it. I would pick out a topic on it and write about it. My first topic was answering the question of who was the bride of Christ. Interestingly enough, it was not the whole church as many taught. I would go back to the types and shadows of the Old Testament to demonstrate that the bride was a remnant portion of the body of Christ. 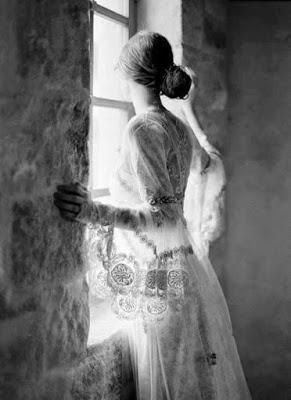 
I Corinthians 15:45-49
And so it is written, “The first man Adam became a living being.” The last Adam became a life-giving spirit. However, the spiritual is not first, but the natural, and afterward the spiritual. The first man was of the earth, made of dust; the second Man is the Lord from heaven. As was the man of dust, so also are those who are made of dust; and as is the heavenly Man, so also are those who are heavenly. And as we have borne the image of the man of dust, we shall also bear the image of the heavenly Man.


Genesis 2:18, 21-23
Yahweh God said, “It is not good that the man should be alone; I will make him a helper suitable for him…” Yahweh God caused a deep sleep to fall on the man, and he slept; and he took one of his ribs, and closed up the flesh in its place. He made the rib, which Yahweh God had taken from the man, into a woman, and brought her to the man. The man said, “This is now bone of my bones, and flesh of my flesh. She will be called Woman, because she was taken out of Man.”

It is quite obvious that the church is called “the body of Christ.” Even as Adam’s bride was not made from his entire body, but from a remnant portion, so too is Christ’s. After all we read of Christ having guests at His wedding. The choice part of Christ’s body comes from those who give all for the Lord.


Matthew 13:8
But others fell on good ground and yielded a crop: some a hundredfold, some sixty, some thirty.


The bride is the hundredfold portion of Christ’s body.

I took some other parables that Yahweh brought to me at that time. One of them was the parable of the butterfly. One can see that this is a theme by looking at the cover of my book. There is a butterfly on the index finger of the hand. There is also a caterpillar crawling up the arm near the wrist, and attached in the inside of the hand is a cocoon. I will let the reader take a look at the book to get their own idea of what all that is about.

It is time to renew an interest in the bride. We need to stir ourselves up to be among the hundredfold. While we are at it we ought to send this book link to everyone we have a hope for of becoming the bride of Christ. Let us be quick to say,


Revelation 19:7-9
“Let us be glad and rejoice and give Him glory, for the marriage of the Lamb has come, and His wife has made herself ready.” And to her it was granted to be arrayed in fine linen, clean and bright, for the fine linen is the righteous acts of the saints. Then he said to me, “Write: ‘Blessed are those who are called to the marriage supper of the Lamb!'” And he said to me, “These are the true sayings of God.”